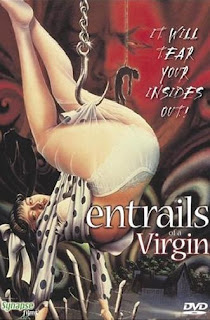 ...aka: Entrails of a Virgin
...aka: Guts of a Virgin
Directed by:
Kazuo 'Gaira' Komizu
Sex and violence. You like? This one delivers plenty of both, so if that's all you're looking for, you'll get your money's worth here. Personally, I didn't care much for it and that likely has a lot to do with the people involved. The film centers about six characters; three incredibly sleazy guys (porn king, photographer and some other guy) and three incredibly stupid women (model, makeup artist and an aspiring model working as a makeup artist), and every single one of them is someone I'd cross a busy highway to avoid bumping into. Hell, I might even cross a busy highway wearing a blindfold to avoid making contact with any of these scumbags. Disliking all the principals involved is one thing, but being repelled by all of them is another matter entirely. Of the men, two of them are rapists who use their position to bully women into having sex with them. Neither needs to use much - if any - actual force to get who they like into the sack, though. They simply start undressing the girls, ignore their faint and unconvincing "no's," pull them back when they try to crawl away and basically just do what they want with them. The other guy isn't a rapist. He's a wrestler who strips down to his underwear to try out some of his moves on one of the ladies. He ends up putting her in so much pain that she pisses herself before he knocks her out cold by pile driving her head into the floor. I guess this is supposed to be amusing. It's not. It's actually kind of depressing.
The females are all pathetic, mindless and weak. I'm not one to climb on a soapbox and proclaim a film misogynistic, but if any film is actually deserving of the label it's this one. The photographer character has his way with both of his models; each one squirming and squealing through prolonged (and just plain boring) quasi-rape scenes where they're humiliated, photographed and forget to put up any kind of resistence. Instead, they just basically just lie there uncomfortably wiggling, complaining and whining. It's not fun to watch. At all. Other than the two models getting manhandled in every scene, there's also a woman who looks like she's about 25 and is thus treated by the guys like she's all used up. More on her later.
On their way back from a photo shoot, the six run over someone or something. Whatever it was promptly disappears. A thick fog rolls in and they're forced to spend the night in an abandoned house. As two of the guys discuss which two girls they want to screw, the thing they ran over shows up, reveals itself to be some kind of demon or monster (which is nothing more than a guy caked in mud) and does away with the cast. We get an axe to the head, eyeballs popping out, decapitation via neon sign, an impalement and other gore. The 'over-the-hill' woman who got laid out during the wrestling bout awakens sex-mad, makes out with a decapitated head, masturbates with a dismembered arm and then has a sex scene with the "monster," who spooges all over her and, for an encore, rips her intestines out through her vagina. The "monster" also gets to bang another of the ladies and both of the rapees like being raped because their attacker has a big dick. Sigh.
Sex wise, this gets pretty graphic at times, but because of Asian censorship laws that forbid full frontal nudity and pubic hair from being shown, any below-the-waist action has been optically blurred out. Those wanting standard sex scenes where both parties get some enjoyment out of it might as well forget it. And those into rape fantasties aren't going to particularly like this because the women never physically resist the men. They just act uncomfortable and whine throughout their scenes. The dialogue is consistently awful, the effects aren't anything special and there are several attempts to be arty and stylish that are completely laughable. Even clocking in at just 72 minutes and with the tasteless events I've described above, it's surprisingly monotonous and even boring at times.
Through the 80s and into the early 90s, it was amongst the most popular Asian booleg titles here in America, along with the GUINEA PIG series. Since that era, it's seen several VHS releases and in 2004 saw its first official DVD release here in the States via Synapse, who included it as part of their "Asian Cult Cinema Collection." At least two sequels; ENTRAILS OF A BEAUTIFUL WOMAN (1986) and RUSTED BODY: GUTS OF A VIRGIN III (1987), followed.
★1/2
Posted by The Bloody Pit of Horror at 2:29 PM 1 comment: