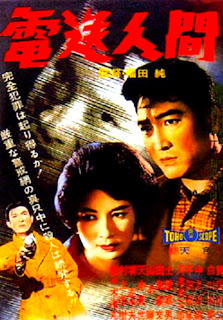 Both Tsudo (now using the alias Goro Nakamoto) and Nikki (confined to a wheelchair and missing both legs) live quietly in seclusion on a remote farm... located near an active volcano! Over the years, Nikki has perfected a transportation device capable of moving matter from one place to another in a matter of seconds. Unbeknownst to the good doctor, a (rightfully) bitter and vengeful Tsudo is secretly using his contraption to leap back and forth from his desired locations to get revenge on Onishi and the others; easily alluding the police in the process. Tsudo sends the gold dog tags as sort of a death sentence, sends audio tapes ("I'm going to send you to hell!") or notes to each of the men informing them when he plans on killing them and stabs each with a bayonette. Because Nikki's experiment still has a few kinks, Tsudo's appeareance after transporting himself sometimes takes on a staticky, holographic look (one of several ideas present here that were cloned by Wes Craven for his shitty 1989 flop Shocker).