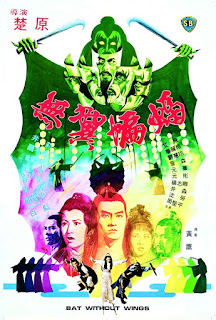 
Twenty-eight of the best fighters in the boxer world travel to the Hungfa Temple in an effort to defeat a murderous, lustful demon nicknamed "Bat Without Wings" (Ching Tang) who hides his identity behind a black-and-white "mask" that looks more like KISS make-up. Bat is rumored to have kidnapped, raped and murdered many beautiful young women in the area and must be stopped. After eliminating all but two of the swordsmen, he's finally killed by Szma Zhongyuan aka Iron Palm and the province can now rest easy. Five years pass and a security bureau is passing through a rural area when they stop by a tea house. The owner (Feng Ku) passes along a note to Lei-fing (Pui-San Auyeung), which has been left there for her by one Xiao Qi (Derek Yee Tung Sing). Nicknamed "The Broken-Heart Sword," Xiao is a brave and handsome young fighter known for possessing a white pearl sword and, uh, a green horse with a purple silk rein. Lei-fing swoons at the prospect of meeting him so when the note asks her to come see him at an abandoned local temple it's pretty much a no brainer. Lei-fing tells her party to stay put while she walks to the temple alone.

While Lei-fing is away, the owner reveals himself to be the notorious Bat and quickly slaughters all of the travelers save for a handmaiden Qiuju (Li-Ling Liao), who passes out. Lei-fing arrives at the temple but instead of finding a heartthrob there waiting to sweep her off her feet, she finds the tea house owner / Bat has lured her there. Two swordfights later, Lei-fing finds herself drugged and in some catacombs beneath the temple decorated with sculptures of beautiful women where a second, facially scarred man who appears to be out of his mind emerges. As it turns out, the tea house owner who announced himself as Bat is merely an impostor and the deranged guy being kept in the underground lair is the original Bat. And the man impersonating Bat was also impersonating the tea house owner (whom he killed before the security bureau even arrived) and is actually Iron Palm, the man rumored to have killed Bat five years earlier. Got that?

Meanwhile, in another city, Qi Xiao is trying to enjoy a relaxing dinner but keeps getting interrupted. Iron Palm's daughter, Dongcheng (Ling Chi), arranges for Ghost King (Shen Chan), leader of the murderous Hell Gang, to try to kill him. After winning their fight (which turns out to be a test of his abilities), Dongcheng hires Xiao to try to locate her father, see if rumors that Bat are still alive are true (hint: we already know the answer to this) and also get revenge since her lover (Jason Piao Pai) has been killed. Two comic robbers then show up for yet another quickie swordfight before running off. Finally, Lei-fing's father, Lei Xun (Yong Wang), and her fiance, Han Shen (Kuan-Chung Ku), show up asking if he had anything to do with his daughter's disappearance (hint: we already know the answer to this, too).

Having already been killed and dismembered, Lei-fing's temporarily reassembled ghost returns briefly to remove her head and leave it on her father's doorstep before her body falls apart. Qi Xiao joins the grieving, vengeful father and fiance in their quest for answers, which leads them to Leng Qiuyun (Fei Ai) aka the "Thousand-Faced Scholar," who was the only other man to survive the fight with Bat five years prior. Unfortunately, Qiuyun refuses to give out too much information as his beloved Ximen Luoye is in danger and hiding out somewhere. Ximen Luoye also happens to be a dead ringer for Lei-fing (and is played by the same actress). Few people are what they seem here and most of them have some kind of ulterior motive that's eventually revealed. As if there's not enough going on already, there are also two swords called "Bat Blades" that, when combined together, give out a clue to the whereabouts of a hidden fortune in jewels.

Our heroes face multiple hurdles along the way, including endless duplicitous characters, endless swordfights (one even taking place over a lake of acid), surviving a booby-trapped island with moving bamboo, toxic water and a spike pit, discovering secret passageways, enduring Taoist black magic spells and much more. The titular bad guy turns isn't even the primary focus here, as his character is bat-shit crazy and laughing like a loon the entire time. Having this perverted sex predator / killer of teenage girls as the film's primary comic relief is a bit odd to put it mildly. 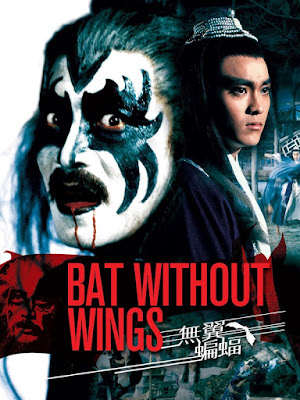 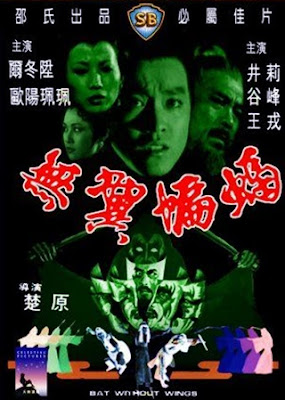 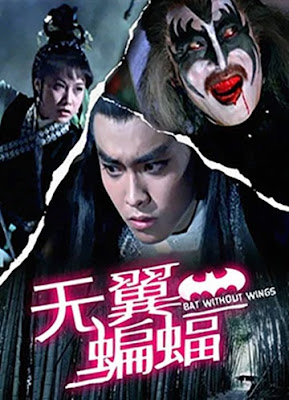 There's action, adventure, fantasy and horror aplenty in this very busy wuxia and a lot to appreciate from a visual standpoint. Since this is from Shaw Brothers, the sets, props and costumes are all on point and the lighting choices are great. There's a nice autumnal look to the outdoor sets with use of pastels and lots of swirling fog and bolder color choices used in the underground lair. In other words, this is always a joy to look at. However, that's not quite enough to make up for the awful, redundant dialogue and a plot that's a headache-inducing mess. We have characters falsely claiming others are dead, characters pretending to be other other characters, characters faking their own deaths, almost no character who is what they seem and far too many characters with individual motives to even keep track of here. It's such a convoluted mess that you may be like me and just stop caring altogether.


There are a number of DVD releases with English subtitle options. The most common is the Celestial Pictures release that's part of their "Eastern Masters" collection.