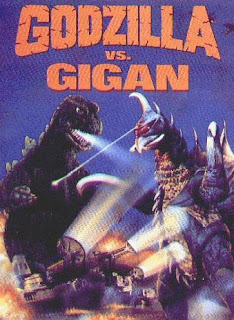 ...aka: Earth Assault: Godzilla vs. Gigan
...aka: Earth Destruction Directive, The
...aka: Extermination 2025
...aka: Godzilla on Monster Island
...aka: Godzilla vs. Gigan
...aka: War of the Monsters, The
Directed by:
Jun Fukuda
A comic book artist and his friends stumble upon the plans of a group of evil alien cockroaches (?) masquerading as amusement park developers. They're sick of us slowly destroying the Earth with pollution, so they call in some monsters to do it faster. Ghidrah, the spastic three-headed dragon and Gigan, the metallic bird with buzz-saw belly fly in from outer space and start destroying Tokyo, so it's up to our hero Godzila to save the day. He enlists the aid of Angillus, the giant horned porcupine, for a climactic tag team battle royale. There's plenty of expected mini-model mashing, explosions, fires, pro-wrestling style fight moves and terrible dubbing for fans of this series, plus Godzilla talks for the very first time (it's only a few words). And who can forget the cameo from the smashing Baby Godzilla, who blows a smoke ring and then immediately disappears from the rest of the film? This cute/silly/harmless Saturday matinee kiddie flick was originally released in to American theaters as GODZILLA ON MONSTER ISLAND, although only one brief scene takes place there. (Apparently that little bit of 'Monster Island' footage has been recycled from one of the earlier entries). The title I saw this under and listed here (GODZILLA VS. GIGAN) obviously ignores the presence of the other monsters in the cast. Technically, they should have called it Godzilla and Angillus vs. Ghidrah and Gigan.
★★
Posted by The Bloody Pit of Horror at 12:26 PM