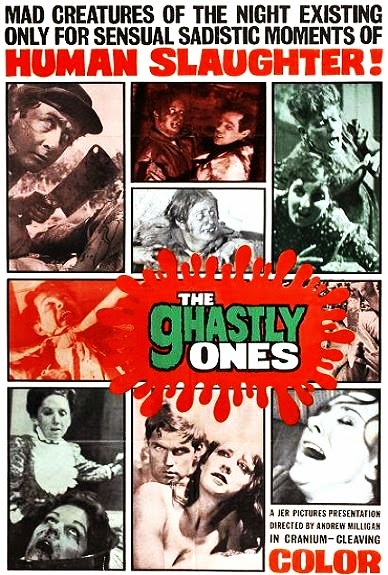 
I won't delve into the plot too deeply (not that there's much to even delve into here...), but this notorious little stinker involves a trio of bitchy sisters who bring their husbands to a secluded island to get an inheritance. In his will, their miserable father specifies they must spend three days in "sexual harmony" (?) with their amusingly effete, sensitive and proper hubbies while they're there. And they don't hesitate to spend what seems like an hour rubbing on each other, having sex and smooching in oddly discomforting pornographic close-ups. But greed gets the best of someone as the couples begin to bicker over the property and it isn't long until someone starts hacking off mannequin body parts right and left. To throw you off, they've also included two bitter old spinsters (Veronica Radburn and Maggie Rogers, two of the film's better performers) and a retarded guy (Haal Borske) with big fake plastic teeth who laughs maniacally as licks the blood off a white bunny rabbit he's just killed.

If nothing else, this is one of the most technically inept ventures you'll see from this period. The photography is horrid, either over-lit or under-lit, dark and grainy, the sound is equally bad (there's a lot of static and interference on the microphone) and during the action the cameraman seemingly goes into an epileptic fit as the camera shakes so bad you can't tell what the hell is going on. Hey now, wait a minute... Does this mean Andy was ahead of his time in developing the dreaded "shakycam" technique that plagues many of today's horror films? Doubtful, but it's just as annoying here as it is in the more "polished" (expensive) productions of today. The special effects are nearly as bloody as H.G. Lewis', and just like the "Godfather of Gore"s magnum opuses they're done with obvious plastic / rubber / wooden parts, as well as no sound effects and often no screaming or reaction from the cast member getting hacked up. During sex scenes the camera slowly pans up and down bodies so closely you can't tell if it's the girl or guy you're looking at. The fact one of the women has hairy armpits doesn't help matters. Finally, the attempts at a period setting are pathetic and unconvincing. And I swear I even heard the director talking several times from behind the camera!

However, there are several other things that set this apart from other Grade Z flicks. Firstly, the overwrought acting and the dialogue... My God! The people in this movie just never shut up. During an early scene, a man and his wife go to visit the husband's brother to borrow some money. Once the wife walks out of the room, the older sibling makes a pass at his little bro and wants to reminisce about back in the day when they were lovers!! Say what? There's more twisted melodrama packed into this 72 minute film than an entire season of Days of Our Lives. Second, and most importantly, even though this is clearly a terrible film, it's an instantly distinguishable film; a separate entity entirely. It's not just another bad, forgettable cardboard creature feature or slasher flick, but a fascinatingly bad yet deeply personal one coming from someone with major skeletons in their closet. Milligan's resentment toward the family unit and relationships in general, almost always portrayed in his films in an uncomfortable, corrupt and alien light, is one aspect that affords Milligan and his films the cult following they have today. There are many directors who have worked inside the horror genre, but few whose movies are this obsessive and bitter. It's almost as if you're not so much watching a movie as you are watching a troubled soul subconsciously exorcising their demons before your very eyes.


The cast includes Carol Vogel, Richard "Romanos" / Romanus in an early role, Eileen "Haves" / Hayes, Hal Sherwood (who also co-scripted with the director) and GURU THE MAD MONK star Neil Flanagan as the lawyer / will reader.

The DVD from Something Weird also has the equally interesting, yet strangely more competent, black-and-white Milligan movie Seeds of Sin, as well as a trailer collection located inside "Milligan's Closet."