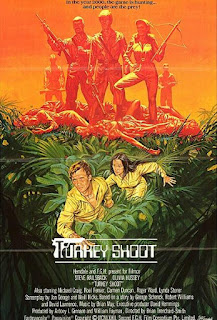 
Some films get raked over the coals by critics. Others get raked over the coals and then left bleeding and badly injured on top of said coals until there's nothing left of them but dust meant to be swept into some cinematic dustbin and then forgotten. This particular film falls into the latter category. You couldn't really find anyone to say anything nice about this one back then and I remember every review book I had gave this its lowest possible rating. That, of course, always made me want to watch it to see if it was really that bad. I never got around to it until now but I notice something interesting has happened in the meantime: Many people, even some critics, have done a 180 and are starting to now give this positive reviews. A Guardian article even went so far as to draw comparisons with The Hunger Games and enough interest was generated to prompt a remake / "re-imagining" in 2014 starring that bland guy from the TV show Prison Break. No, the other one. While Turkey Shoot hasn't magically just changed into a newer, better film over time, the current bit of positivity may have a lot to do with a growing appreciation for older films that are campy, kitsch, outrageous and / or gloriously over-the-top.


The good news here is that if you can't decide just what to watch tonight and have it narrowed down to an action film, a dystopian sci-fi film, a horror film, a prison film, a war film or just a tasteless, sleazy exploitation film, then this has you covered on all fronts. The setting is an oppressive Orwellian future where you're expected not to have any opinion or individuality and must obey the fascist leaders and abide by their restrictive rules or else face death or being shipped off to a top secret camp to be "rehabilitated."

Paul Anders (Steve Railsback) was operating a pirate radio station speaking out against the government and railing against abuse of power, corruption, the camps and forced social conformity. Rita Daniels (Lynda Stoner) was reported by a scorned lover for being a "whore." The cloyingly goody goody Chris ("I've never been against society!") Walters (Olivia Hussey) was wrongly implicated when an injured criminal burst into her shop. All three are drugged and transported to Camp 47, a "re-education and behavior modification" camp promising to turn "deviates" into "assets to society." As soon as the new arrivals step out of the van, the camp's raison d'être is revealed to be a joke. The "fresh meat" are already being ogled by the people who run the place and a limping, whip-wielding guard attempts to force Chris and then Paul to give him a blow job! Deviates, indeed.

While Paul and Rita are worldly enough to adjust to their surroundings, the innocent Chris is having a much harder time of it. She just oozes innocence and vulnerability, which puts a target on her back by attracting the attention of lecherous guards. Luckily, she has Paul to take her under his wing and protect her. Prisoners are forced to work their asses off on a daily basis but most of the time they appear to be raking dirt. They're allowed to have sex "within reason" but homosexuality is a "capital crime," spreading VD is a "punishable offense" and unwanted pregnancy results is abortion, sterilization and castration. In other words, no one's going to want to have sex with those kind of rules in place!

Prisoners must refer to themselves as "the lowest form of life of Earth" and commit "Freedom is obedience. Obedience is work. Work is life." to memory so they can be good little worker ants once they return to society. If they return to society. Making it there requires surviving being regularly beaten, whipped, tortured and casually shot at. One girl is kicked to death and an escapee who's captured and returned is covered with gasoline and set on fire. Being the shining beacon of purity that she is, Chris almost gets gang raped in the shower by guards (the slender Hussey is hilariously given a DD body double for one shot then magic hair that remains glued over her chest for the rest of the scene) but she and a handful of the others have something even worse to look forward to.

"Camp Master" Charles Thatcher (Michael Craig) not only runs the camp with all of the sadistic nonchalance of your usual prison movie warden, but has created an early release "special program" that involves participants allowing themselves to be hunted down Most Dangerous Game-style by him and his rich buddies. Watching the prisoners on monitors back in Charles' luxurious home, his guests can even pick and choose which "turkey" they want to try to kill. Paul, Chris and Rita are all selected, along with Dodge (John Ley), a likely necrophiliac who eats raw fish guts, and Griff (Bill Young), who - like Paul - has a history of escaping such establishments. The rules? They'll be released into the woods at dawn, given a three hour head start and must survive until sundown. If they can, they'll be released. At least that's what they're told.

So is this as bad as the critics once said? Yes! I mean no! Well, let's just say it's complicated. Despite the futuristic setting, sci-fi trappings are extremely minimal and the first half plays out like your run-of-the-mill prison exploitation feature with all of the cliché characters and events one would expect in such a film. The prison camp sets are hilariously cheap-looking, with aluminum siding interiors, buildings that seem constructed out of plasterboard with pointed canvas tent roofs and a dorm room where prisoners sleep on painted boxes with air mattresses on top. The characters are all thinly-drawn and not one of them, not even our heroes, is remotely likable. But you just need to endure all that to get to the real meat of the film.


At about the halfway point, something amazing happens: One of the hunters trots out a werewolf-like "circus freak" wearing a top hat named Alph! I immediately burst out laughing and realized just how ridiculous this whole thing was and how this absolutely had to be satirical. From that moment until the finale, this continues on in such an over-the-top fashion that it becomes immensely enjoyable. There's a surprising amount of bloodshed during the hunt portion that predominates the second half, while the big break-out finale has tons of explosions, dozens of people getting shot and blown up by bazookas and grenades and even fighter jet bombings!

As Thatcher and his fellow sickos Mallory (Noel Ferrier), Jennifer (Carmen Duncan) and Tito (Michael Petrovitch), plus sadistic guards Ritter (Roger Ward) and Red (Gus Mercurio), partake in the hunt, even I was surprised by the tasteless amount of gore put on display. There's death by arrow, machete, getting run over and someone getting impaled crotch first by a ridiculous booby trap. Hands are chopped off, an eye is gouged out with a stick, someone is shot in the dick and a body gets cut in half by a bulldozer (!!) A face erupts into flames after being stabbed with an explosive-tipped arrow and there's even a nifty little head explosion. Even Alph the werewolf freak gets his moment to shine by ripping off someone's pinky toe and eating it (!) before cracking their spine over his knee.

Brian May did the score and actor David Hemmings was an executive producer and shot 2nd unit footage (sans credit). Turkey Shoot was a troubled production where the script had to be re-written, a few of the actors were difficult and a large chunk of its budget got cut just before filming started, which forced the scheduled production days to go from 44 to less than 30. The latter may even explain those wonky sets as something had to be drastically cut.

After its 1982 Australian run, this was released to U.S. theaters in 1983 under the title Escape 2000 (also the VHS title). It was more successful in the UK, though, where is was cut by over five minutes and released as Blood Camp Thatcher, which had people assuming this was an indictment of former Prime Minister Margaret Thatcher! Well, that actually wasn't too far from the truth. Trenchard-Smith said the film was intended to be "a tongue in cheek but gutsy action movie with subtext about corporate fascism at the beginning of the Reagan era." 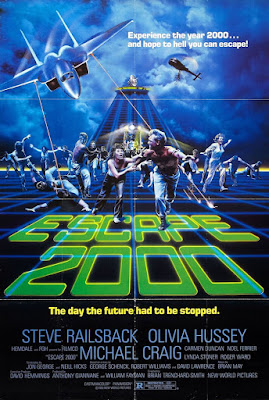 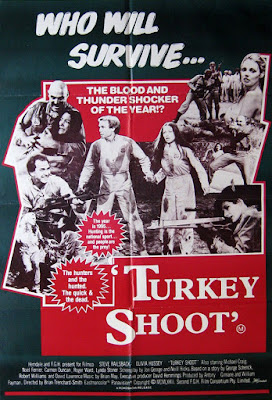 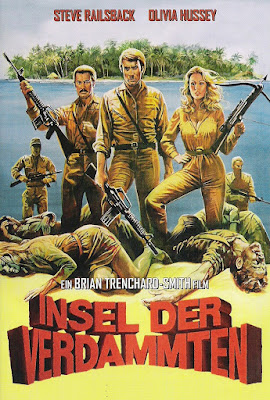 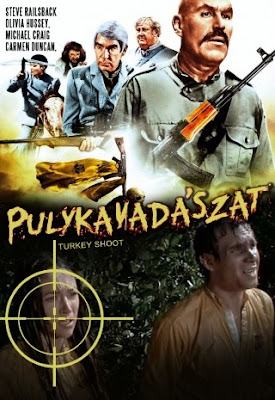 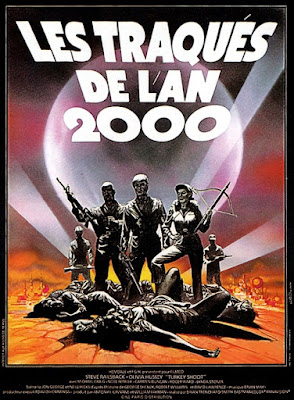 The 2003 DVD from Anchor Bay has interviews with Craig, Stoner and Ward discussing the film, which were retained for Severin's 2015 DVD / Blu-ray release.