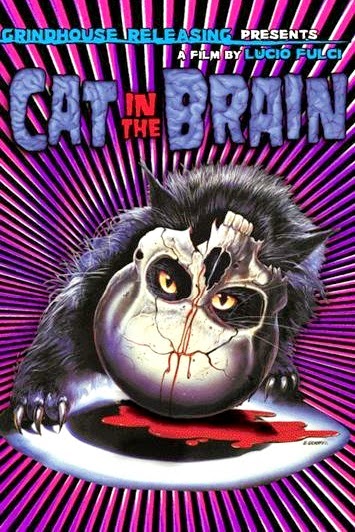 
Lucio Fulci is losing his mind. You might even say he feels like a cat is eating his brain. He's being haunted by gory visions conveniently taken from some of the late-80s films he either produced or made himself and they're distracting him from his daily life. When he goes to a restaurant to have a steak, he can't help imagining a maniac eating a piece of human flesh. When a gardener is outside cutting up a tree with a chainsaw, he's thinking of a chainsaw dismemberment and starts hacking up red paint cans with an axe. Wanting help for his troubling thoughts, Lucio goes to see psychiatrist Egon Schwartz (David L. Thompson), who has a hateful wife (Malisa Longo) and a sexy assistant/nurse (Paola Cozzo) who's also an aspiring actress. Dr. Schwartz uses hypnosis to treat the director and immediately afterward, a prostitute is messily hacked up with a switchblade and axe, and another hooker gets her throat slashed. Fulci seems to think his shrink might be the killer. Or is he just imagining it? Or is he actually the killer?


And that's basically all the "plot" you'll get with this one. The general idea of a burnt-out horror director's films coming back to haunt him or causing psychological problems in his "real life" is an intriguing one, but this film offers no actual insight into any of that. All this really amounts to is little more than a barrage of gory clips senselessly edited together. Lucio walks and looks off into the distance. Insert a gore scene. Lucio opens a door. Insert a gore scene. Lucio looks out of a window. Insert in gore scene. Repeated ad nauseum. The overall effect is a little numbing but if you're an indisciminate gore-hound who just wants to see people getting killed in bloody ways, you'll probably like what this has to offer. In other words, as a sampler tape of Fulci gore scenes, it does the trick. But if you're like me and have already seen many of the films this one borrows footage from, you'll likely see this as little more than a silly, money-grubbing venture where slight pretensions aren't nearly enough to justify the making of such a movie. For the record, there are two new gore scenes here. One features a cat puppet pawing around on a brain, and the other features a woman getting her throat slashed with a wire. The rest of the gore scenes are repeats.


About 75 percent of the recycled footage comes from two films. The first is TOUCH OF DEATH (1988), a gory black comedy which was directed by Fulci and stars Brett Halsey as a nonchalant psycho who kills a succession of women in disgusting ways for their money. Included are the chainsaw dismemberment, strangulation, cannibalism, slopping hogs with guts, woman having her head bashed in with a stick, face roasted in an oven and guy getting run over murders from that film. The second film is MASSACRE (1989), a slasher directed by Andrea Bianchi. Both of the featured prostitute murders, the movie set footage, the graveyard footage, the boat house murders and much more have been swapped from that film. The scenes of busty Jessica Moore getting stabbed to death in the shower, a child being decapitated with a chainsaw and woman getting her head cut off by a drawer are from THE MURDER SECRET (1988). The Nazi orgy scene is from Ghosts of Sodom (1988) and actor Robert Egon shows up in new footage to help link that film in with the new one. Annie Belle getting decapitated with a scythe is from Escape from Death (1989). The corpse-on-a-wheelchair and guy-getting-throat-cut-by-wheelchair scenes are from Bloody Psycho (1989). Paul Muller getting killed is from Hansel and Gretel (1989). Of all those films, Fulci only directed two; the rest were either produced or "supervised" by him.


Some have dubbed this the 8 1/2 of gore films, but they're only kidding (at least I hope); this one's only for those looking for over-the-top, senseless gore and T&A. However, the 2-disc Grindhouse release is loaded with so many extras (including several lengthy interviews with the director), it's a must-have for his fans.