Japanese-born Issei Sagawa went off to study literature at the University of Paris, where, in 1981, he lured pretty Dutch student Renée Hartevelt back to his apartment, shot her in the back with a rifle and then spent the next two days indulging in necrophilia and cannibalism. He was apprehended while trying to dispose of the body in a lake, declared legally insane, convicted of the crime and put in a French mental institution. Issei was eventually extradited to Japan and because of a few technicalities (plus the fact he had a wealthy father and thus the best legal representation money could buy) was released a free man in 1986. Sagawa then enjoyed celebrity in his home country; being a frequent talk show guest and the subject of songs, books and documentaries. He also worked as a guest speaker, apparently made his own movie, landed a few acting roles for others and even wrote restaurant reviews (!) for the Japanese magazine Spa. Very. Fucking. Sick. 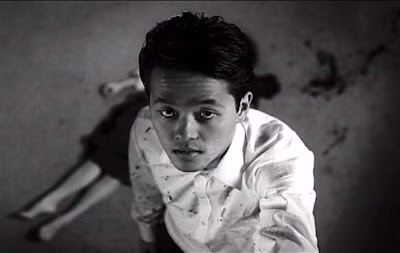 This gritty black-and-white short is based on Issei's crime, but does not follow up on his later celebrity, nor does it afford us even a glimmer of characterization or plot. It's simply about the vicious murder / immediate aftermath, with the boyish-looking killer (Takashi Matsuo) shooting, dismembering and fooling around with the corpse of his victim (played by RABID GRANNIES star Catherine Aymerie). Pointless? Perhaps, but for what it is, it's well-made, arty, disturbing and there's both gore (eating piece of flesh, arms and legs removed...) and full frontal nudity. The sparse set decor, lighting and cinematography are excellent. Interestingly, the entire incident is filmed by the killer here as he constantly goes right up to the screen to adjust his camera, which is not what happened in real life, but certainly gives this an unnervingly voyeuristic touch which effectively mirrors Sagawa's later 'cult celebrity.' 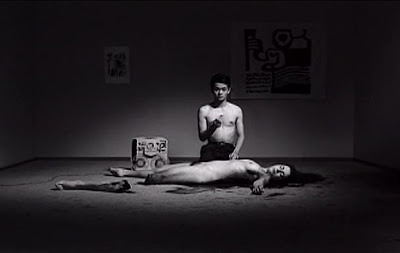 As of this writing, IMDb erroneously lists this title as being from 1996.