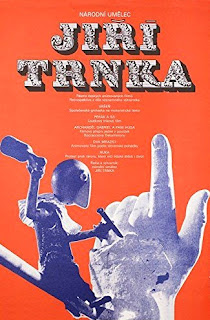 ... aka: Hand, The
Directed by:
Jirí Trnka
The protagonist in The Hand is content. Very content. He's so content that he even has a smile on his face while he's sleeping. Instead of being like many of us, moaning and groaning every morning as soon as the alarm goes off, this guy is so excited about facing the day that he does literal cartwheels as soon as he gets out of bed. And it's easy to see why: He's able to do exactly what he wants to do all day, every day with minimal distractions. In this case that's make pottery for his beloved plant, which he hopes will bloom into a beautiful flower one day. Hey, we all have that one hobby or interest or love or goal that keeps us going, right? It doesn't really matter if nobody else understands that one thing we have. We know how it makes us feel and that's enough. However, there's always the possibility of whatever that is being taken away...
One morning while he's making a pot, a knock sounds at the door. When he tries to answer it, no one's there. And then a white gloved hand suddenly comes barging through the window, knocking his beloved plant off the window seal and shattering the pot. He tries to be polite and greet the hand, but it goes right over to his potter's wheel and destroys his current pot; molding the clay into a pointing hand instead. In other words, it's not the least bit interested in his wants, but only in its own. The man shoos the hand back through the window, closes and locks it... but it's not going away so easily. 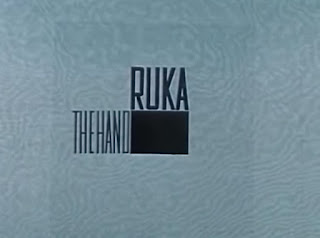 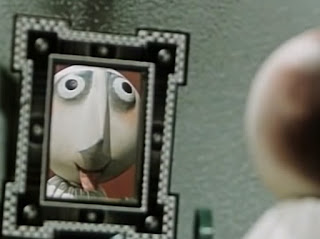 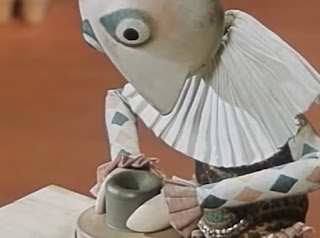 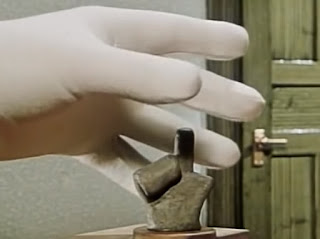 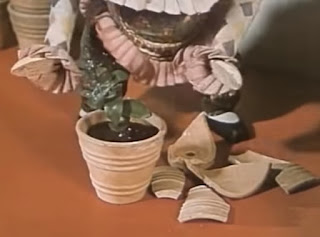 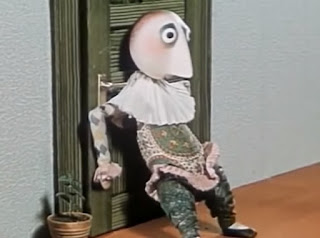 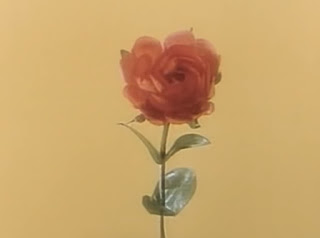 The hand next forces its way back through the door and pushes a cardboard box in. An annoying ringing noise prompts the man to dig through it. He finds a phone and the hand is on the other line, still insisting on its hand sculpture and even offering to pay. The man throws the phone out of the window but it isn't long until the hand returns, this time with a TV set that plays nothing but hand propaganda, showing the scales of justice, the Statue of Liberty's torch and, more ominously, a boxing glove, a skeletal hand and a hand holding a pistol. The hand even threateningly points a finger at him just like a gun. There will be consequences if he doesn't do what he's ordered to do.
The potter finally puts up an effort to physically fight back but he's no match for such a powerful figure. The hand turns black and, using puppet strings, forces him into a cage where it directs his every movement in sculpting a towering white hand. He's fitted with a laurel wreath and given medals for his cooperation but decides to destroy his creation and make a run for it, which leads to tragic consequences. 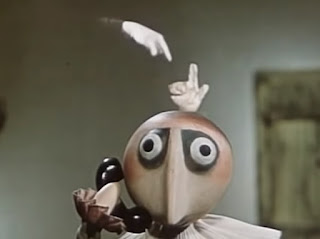 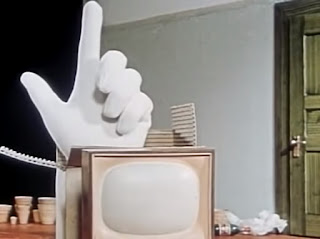 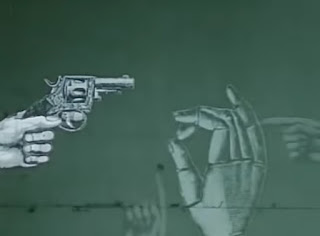 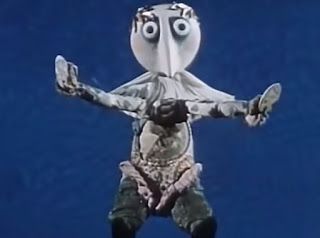 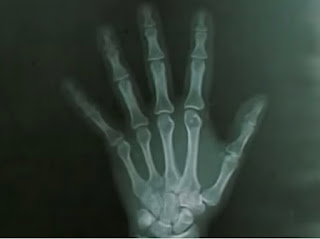 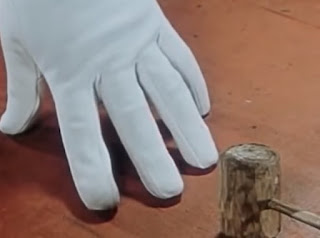 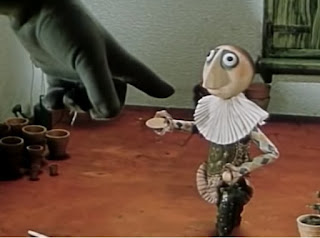 While I've seen multiple interpretations of this piece, when you read more about the director's life in then-Communist Czechoslovakia, and how his work was frequently banned there, the original intent is pretty obvious. The potter is an artist unwilling to compromise his artistic drive / vision despite insistence, harassment, coercion, bribery, threats of violence and even the possibility of death, while the hand is representative of a restrictive, totalitarian government out to either control or stop the artist's message. No matter what you personally get out of this, it's a brilliant mix of stop motion and puppetry and is clever, sometimes funny, often bleak and disturbing and, ultimately, actually quite sad. 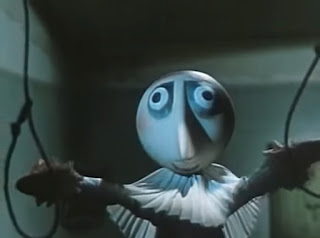 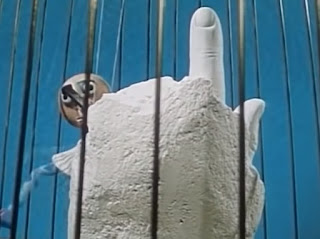 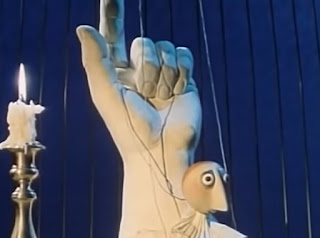 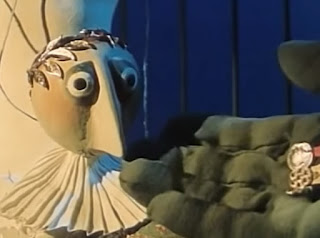 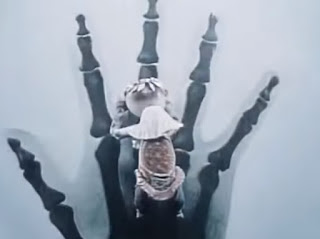 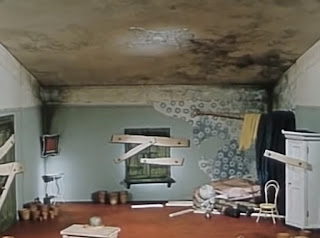 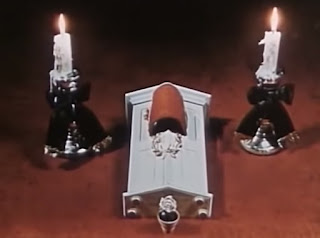 Trnka was mostly prolific as a children's book illustrator, but made over a dozen animated shorts. This was his last and many consider it his finest work. It won numerous awards, including the Grand Prix at the Annecy International Animation Film Festival. Later, Annecy also gave it a special award as the best short shown there up until 1990. Trnka passed away in 1969 at the age of 57, just after winning the Hans Christian Andersen Award for his illustration work.
★★★1/2
Posted by The Bloody Pit of Horror at 9:15 PM 12 comments: