Just stumbled upon these gems (some possibly from the book Extreme Canvas: Movie Poster Paintings from Ghana and Ghanavision) and figured I'd share...
.
In the 1980s video cassette technology made it possible for “mobile cinema” operators in Ghana to travel from town to town and village to village creating temporary cinemas. The touring film group would create a theatre by hooking up a TV and VCR onto a portable generator and playing the films for the people to see. In order to promote these showings, artists were hired to paint large posters of the films (usually on used canvas flour sacks). The artists were given the artistic freedom to paint the posters as they desired - often adding elements that weren’t in the actual films, or without even having seen the movies. When the posters were finished they were rolled up and taken on the road (note the heavy damages). The “mobile cinema” began to decline in the mid-nineties due to greater availability of television and video; as a result the painted film posters were substituted for less interesting/artistic posters produced on photocopied paper. (Author: Assemblyman-eph) 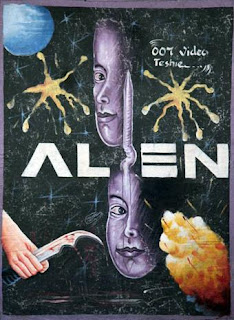 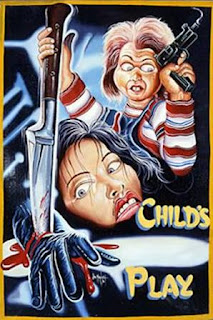 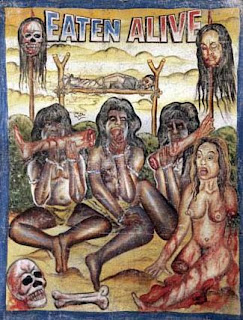 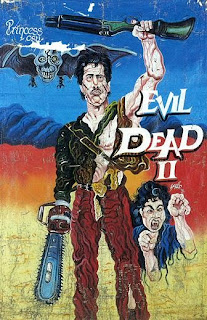 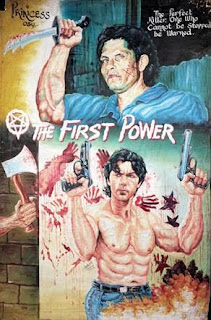 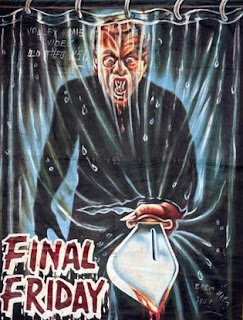 Not sure what entry this is, but clearly influenced by Part III's poster. 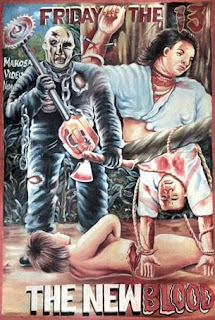 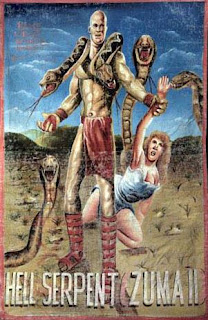 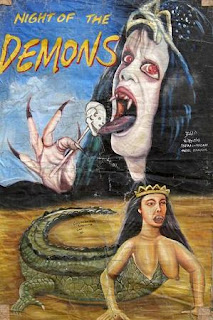 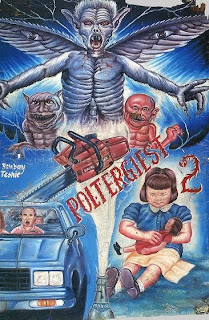 Poltergeist II: The Other Side (1986; Brian Gibson) 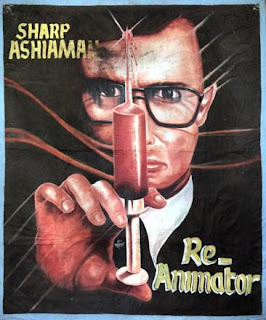 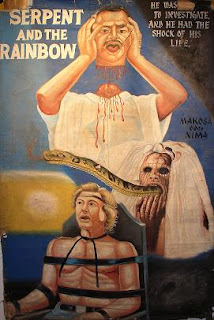 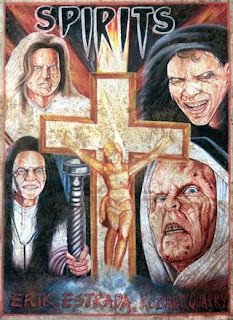 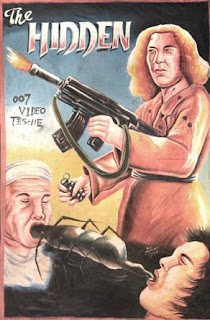 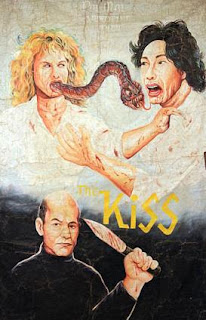 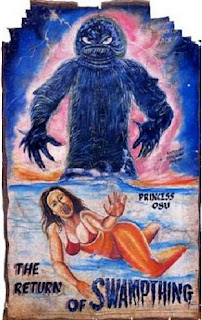 The Return of Swamp Thing (1989; Jim Wynorski)
.
There are many more where these came from, but they're either for movies too recent to be covered here or films whose titles I'm unfamiliar with. Undoubtedly, films were retitled there, but I haven't been able to match some of the art with the movies. If I can find additional information to help match up the other posters, I'll add them on here.
.
Posted by The Bloody Pit of Horror at 9:45 AM 2 comments: 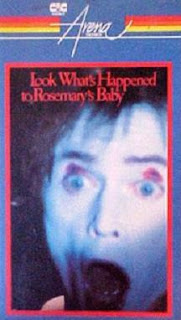 ...aka: Look What Happened to Rosemary's Baby
...aka: Rosemary's Baby II
Directed by:
Sam O'Steen
I tried my best to put Polanski's 1968 masterpiece in the back of my mind before viewing this long-forgotten follow-up, but even accepting this on its own terms and within its own network TV limitations, it's still a complete failure as both a sequel and a stand alone film. Badly written, badly acted, horribly dated and completely lacking in both suspense and chills, it's no wonder no one's ever bothered resurrecting this unnecessary, embarrassing relic. Eight years after the events in the original, Rosemary Woodhouse (an annoyingly shrill, consistently hysterical Patty Duke) is still living in the same apartment house raising "Adrian" in the company of the same coven of elderly Satanists headed by Roman (Ray Milland) and Minnie (Ruth Gordon) Castevet. She flees with her child, takes refuge in a church during a storm, hops on a bus the next day and heads out west toward Hollywood to try to get some money from her estranged, backstabbing husband Guy (George Maharis). While on a layover in Nevada, Adrian (or as she calls him, Andrew) kills two children who pick on him. Rest stop whore Marjean (Tina Louise) helps them hide, but is possessed and tricks Rosemary onto a hell bus, which conveniently removes her from the rest of the movie.
Years later, a now twenty-something Adrian (Stephen McHattie) is still living with Marjean, who now owns a successful casino. Adrian's an annoying moody rebel who's always in trouble with the cops for speeding in his black sports car and wants to be a rock singer (groan). On his twenty-first birthday, Uncle Roman and Aunt Minnie show up with some cultists and give Adrian some strange concoction to drink. He then jumps up on stage and starts gyrating around like a spandex-clad Jim Morrison with his face painted up like a mime (!) Outside, Adrian's best bud Peter (David Huffman) is killed when Guy picks up a fallen electric wire off the ground and electrocutes him. Adrian collapses and, blamed for the death of his friend, awakens in a hospital for the criminally insane where a doctor named Ellen (Donna Mills) tries to help him overcome his amnesia with hypnosis sessions. The film then seems to turn into a love story (complete with a ridiculous 'bird woman' hallucination cut in during their little hotel romp... don't ask!), which is actually little more than a cheap set-up the predictable twist ending.
It's divided into three segments; "The Book of Rosemary," "The Book of Adrian" and "The Book of Andrew;" getting progressively sillier as it goes along. The subtle creepiness and expertly modulated suspense of the original is completely absent here, the director gets uneven work from usually dependable actors and employs clumsy voice-overs from various characters and screenwriter Anthony Wilson attempts to ape the black humor of the first and fails miserably. Great actors Milland and Gordon, for instance, are given little to do other than sit around and bicker ("Would you shut up!") and during most of the cult scenes background extras annoying chant "Hail Satan... Hail Adrian... Hail Satan" over and over again. Third-billed Broderick Crawford appears in just one scene as a sheriff.
How many sequels to extremely famous horror films can you name that have never been released to either VHS or DVD in their home country? Obviously someone out there would prefer to keep this one buried, and I can't say I blame them. In Europe (the UK I think), it was released on the Arena label during the 1980s, but other than that I'm not aware of any other releases.
★1/2
Posted by The Bloody Pit of Horror at 7:33 AM No comments: 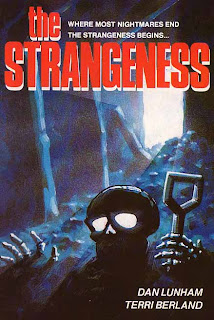 Directed by:
Melanie Anne Phillips
A young couple are killed after an earthquake unleashes something inside an abandoned, multiple-level mine. Later, rumors circulate around about some gold possibly being located inside, prompting wealthy contractor Myron Hemmings (Rolf Theison) to organize an expedition to see if the mine is worth sinking money into. Writer Dan Flanders (Mark Sawicki), his photographer wife Cindy (Terri Berland), grizzled Aussie spelunker Morgan (Keith Hurt), geologist Angela Platt (Diane Borcyckowski), guide Geoff Calvert (Dan Lunham) and his assistant Tony Ruggles (Chris Huntley) are all on board. The seven descend into the mine and their rope is mysteriously cut, trapping them inside. Unfortunately, the greedy contractor didn't bother to inform anyone at his company about the expedition, so no one knows they're even there to come to the rescue. As they search for a way out, there are mysterious and powerful gusts of wind and a slimy, tentacled creature (which has something to do with an Indian legend) shows up to pick them off one-by-one.
.
A very low-budget, very uneven regional production, but one with some merit. The mine setting; a labyrinth of dark catacombs illuminated only by lanterns, helmet lights and flares, creates an effective horror atmosphere that becomes increasingly more claustrophobic as the film goes along. In that regard, and the general idea of people trapped deep underground due to a selfish, foolish member amongst them, the film reminds one of the recent hit THE DESCENT (2005). Also making this worth a look are some good stop-motion special effects (created by Ernest D. Farino and actors Huntley and Sawicki) used to bring the monster to life... Nevermind the fact it essentially looks like a giant, mutant female reproduction organ! Farino also contributed some great opening credits to the film and I was actually taken by surprise at the order in which the characters are picked off. Unfortunately, some other important areas are less successful and keep this from reaching its true potential. With better dialogue, more convincing acting and tighter pacing this would have been a fine sleeper.
.
Filmed in 1980 but not released until five years later, it's one of just a handful of 80s horrors directed by a woman, who ironically used the male alias "David Michael Hillman" and also co-wrote, co-produced, did the score and edited. The original American VHS release was through TransWorld Entertainment. Code Red released it on DVD in 2009.
★★
Posted by The Bloody Pit of Horror at 1:20 AM No comments: