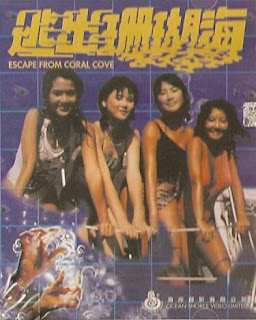 Going by the plot synopsis I had read online, I expected to see a bunch of stranded teens getting killed by a zombie on an island. What I got instead was a feature length commercial for various boats and water sports equipment being pitched by a cast of grating idiots that finally remembers to be a horror movie during the last twenty minutes. In short, this movie is just too damn tame and too damn slow to really pique anyone's interest. Now I'm not saying I don't appreciate subtlety and restraint in the right context, but what's the point of holding back in the 'annoying teens get hacked up by something' subgenre? Right. There isn't a good reason. These movies usually don't bother with having an actual plot, so they're left with trying to come up with inventive and/or bloody death scenes. The more the merrier. Throw in enough sex and it can really satisfy the target audience. Throw in neither, and it fails to justify its existence.

Admittedly, I did kind of enjoy the first twenty minutes. After a confusing prologue, the director (or someone else) decided to tack on a scene of a naked woman (Marilyn Bautista) discovering a decapitated head while snorkeling. Although it has absolutely nothing to do with the rest of the movie, this scene at least provides a cheap shock, a little gore and a little nudity. The underwater photography is also pretty nice. A hilarious version of "In My House" by the Mary Jane Girls (sung by Joann Tang Lai-Ying in Cantonese) plays over the credits. Then we're introduced to our characters. There's Alex (Alex "Fu" / Fong), a good-looking, cocky jerk who tries to have his way with every female in the cast. Well, except for his annoyed girlfriend Chen-chen ("Bee Lee Tan" / Joh Yin-Ling). Another of the girls, San-san (Elsie Chan), is a backstabbing slut (nicknamed "Big Tits" for obvious reasons) who tries to steal Chen-chen's man away and their other friend Irene ("Iwanbeo" / Leung Yuen-Jing) is nice, sweet and pretty. The four meet up with a nerdy aspiring scientist named Dak (Louis Kong) - nicknamed "Four Eyes" for obvious reasons - and his annoying kid brother Gus (Leung Jun-Git).

Everyone goes on a sail boat ride. Then they go on a speed boat ride. Then they go on a ride on a rubber boat. They swim underwater and above the water. They swim to the beach and back from the beach. They go skiing. They roll around in the sand. They even get to joust with those giant Q-tip things like on American Gladiators. They also bitch and complain a lot. Most of the drama is centered around Alex trying to get in Irene's Donald Duck swimsuit while San-san tries to get into Alex's orange speedo. Chen-chen gets pissed, takes off in the boat and doesn't come back (cause she's dead). The rest go back to the resort and the zombie-killer (who now suddenly looks like a normal human and is played by Roy Cheung) shows up. Someone is put in a barrel and thrown over a rocky embankment. An exorcist shows up long enough to get a stake in his heart and a girl gets her head bashed in with a chunk of coral. Strangely (and annoyingly), the womanizing asshole we've spent the whole film hating just disappears from the movie and doesn't even die! There's also a drunken security guard (Chun Wong) who I think is supposed to be funny, a lame cat fight that is over before it can get any good, an exploding goldfish and a dancing montage set to my new favorite song.

At the end, one of our survivors is below deck on a boat, throws an axe at the killer, misses and then picks up a fire extinguisher. Suddenly the film cuts to a close-up of an aerosol can and a lighter above deck as someone torches the killer. The major release of this rare film is from the HK-based Ocean Shores, who offered it on VHS and VCD. Based on what I've read, the company may be responsible for the bad editing cuts, as well as removing some gore from the film, but I can't really verify that claim. What I can verify is that their subtitles suck ass. It's filled with white buildings, white walls and white boats, and nearly every character wears white clothes, so they decided that the best color for the subs is also white. I guess because it blends in so well that half the time you can't even see them.