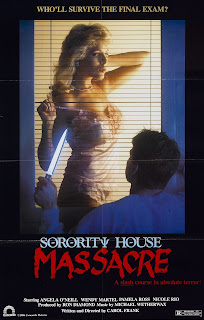 
Here's another B-grade slasher from executive producer Roger Corman's Concorde Pictures and one clearly made in response to the success of Amy Jones' similar (and much better) THE SLUMBER PARTY MASSACRE (1982) from the same company. It's essentially the same movie all over again with scantily-clad girls in a house being stalked and murdered by a knife-wielding maniac / asylum escapee, only this time it's done with far less blood, nudity, comedy, enthusiasm and action. First-time (and only-time) director / writer Carol Frank should have paid more attention to what was going on while she was serving as assistant director on Slumber, because she can't even find a sense of humor about how played out this material is nor is she able to really add any new twists to this tired old formula. Instead, she's too busy swiping plot points from the first two Halloween movies as well as A NIGHTMARE ON ELM STREET (1984), THE AMITYVILLE HORROR (1979) and numerous other popular films of the 70s and 80s. The results are extremely bland. 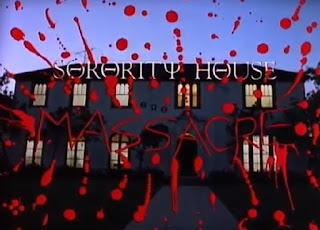 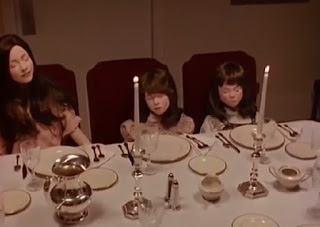 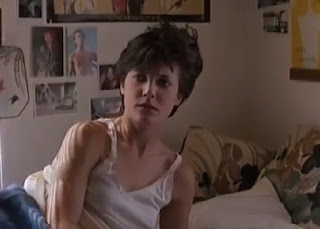 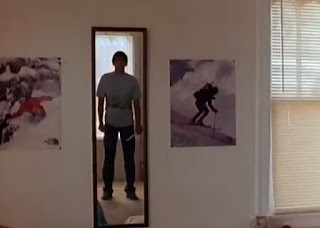 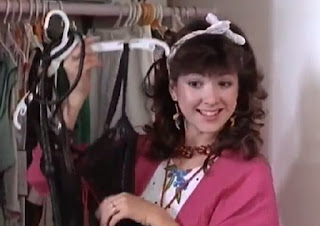 Ever since moving into the Theta Omega Theta house, virginal, orphaned sorority pledge Beth (Angela O'Neill) has been plagued by nightmares of little bleeding girls and some wacko coming at her with a knife. Meanwhile, at a nuthouse, psycho Robert (John C. Russell), who murdered his entire family save for his youngest sister years earlier, is trying everything in his power to bust out. Since this asylum isn't the kind of asylum that exists in reality and is instead the kind of asylum that exists only in bad slasher-horror movies, escaping is easier than even he probably imagined. Robert kills an orderly, casually walks out of two doors and then hops over a small fence and he's home free. No staff. No guards. No alarms. No tall fence lined with barbed wire. No security cameras. Nothing. Hell, no one ever bothers locking any of the doors in this place! After he's out, Robert goes to a hardware store to steal a knife (and kill the owner), carjacks a woman's station wagon and then heads to the sorority house and does exactly what we all expect him do. 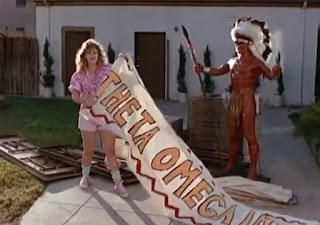 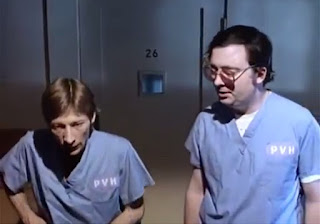 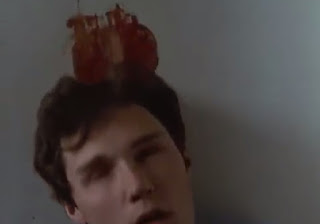 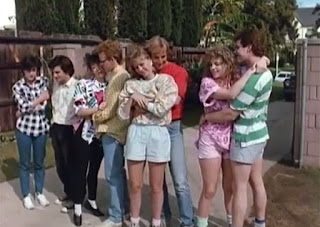 Despite having next to no plot, this film relies on an absurd amount of coincidence to keep going. Robert just happens to escape from the asylum on holiday weekend when most of the students are out of town and there just happens to be four sorority girls at the house; each to represent all four of his sisters. Beth just happens to be Robert's sole living sister who just happens to be pledging a sorority house that just happens to be the same house where the psycho murdered the rest of her family years earlier. Talk about your bad luck! Since Beth was five when she escaped her mad sibling's knife, she doesn't really remember any of it, but being in the house once again starts triggering dormant memories of the crimes. These frequent flashbacks are another of this film's major problems. Not only are they wedged in at every possible opportunity, grinding the film's pace to a standstill in the process, but they're also repetitive after the first few and offer up no new information. In other words, they serve no purpose whatsoever. If you removed all these from the film, it would probably run about 40 minutes. 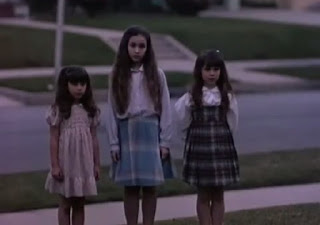 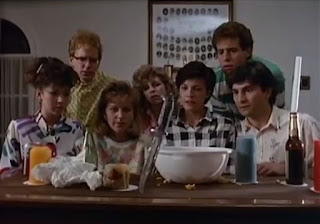 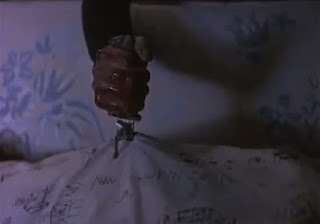 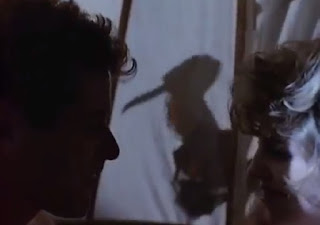 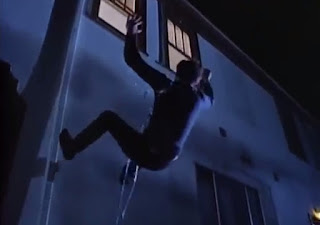 I know one can't expect much from these kinds of films, but it doesn't deliver nearly as much as it should on any front. The poster is your usual bait-and-switch ad art featuring a large-breasted, attractive blonde in lingerie who isn't even in the film. Instead we get some rather average-looking "girl next door" types running around is butt ugly 80s clothes for the duration of the run time. Of the four main actresses, three of them (Wendy Martel, Pamela Ross and Nicole Rio) briefly go topless, so at least it has that much going for it. Where this film flatlines most is during the supposed "massacre." Not only does it take over 50 minutes for Robert to show up at the sorority house, but when he finally gets there he only kills five people and every single one is stabbed in the chest or back with a dime store retractable knife. I have no problem with the director aiming for a more suspenseful, less exploitative film (despite the title / marketing campaign), but she's not able to pull that off either. 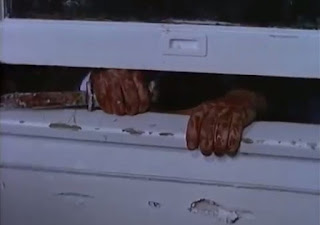 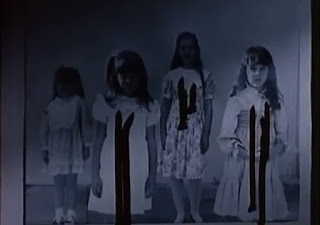 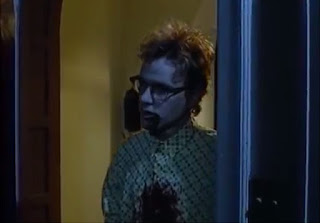 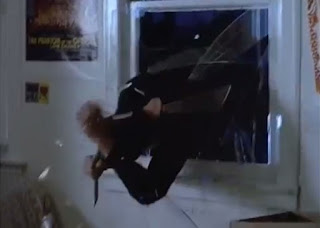 Other points of interest? Well... I guess the boom mic being visible at least three times should be pointed out, especially the shot where you can not only see the microphone but the ENTIRE POLE holding it. Can't say I knew that colleges in SoCal taught psych courses on "dream imagery" and how to hypnotize people either. There's also the mystery of the boxer shorts, where a naked guy running from the killer is naked, then wearing boxers, then naked, then wearing boxer shorts again. I also couldn't figure out how the killer was able to be inside one minute yet leaping in through a second story window the next despite the absence of a balcony outside. Oh yes, and what 80s film would be complete without an 80s music montage? This has one of those, too, but it's kind of lame and the music sounds like something you'd hear in a supermarket. The only potentially interesting aspect is an attempt by the director to parallel the original killing spree to the current one and how that's all edited together. Other than that, this doesn't offer up anything we haven't already seen done, and done far better, hundreds of times elsewhere. 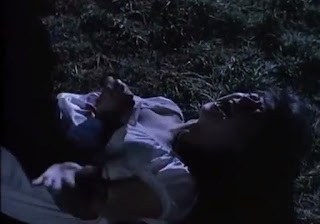 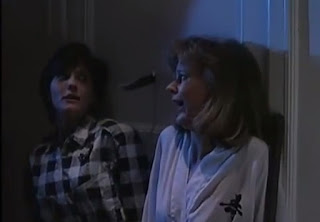 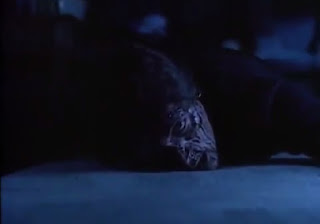 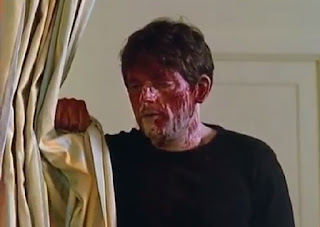 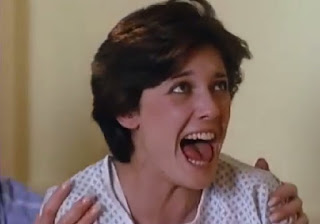 Two unrelated sequels - SORORITY HOUSE MASSACRE II and HARD TO DIE (aka Sorority House Massacre 3) - were eventually shot back-to-back by director Jim Wynorski in 1990 and both were a LOT more entertaining than this one. The thing is, when you are making what is essentially derivative trash for a specific audience, you have two options: 1. Take it seriously and come off as a bland copycat in the process, or 2. Be proud of the fact you're making trash and give the people what they really want to see (gratuitous T&A and blood) and have a sense of humor about it. Personally, I much prefer Wynorski's approach. Deborah Brock, who'd direct SLUMBER PARTY MASSACRE II (1987) the following year, was the post production supervisor.