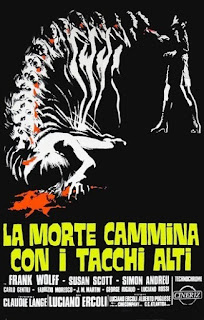 
In Paris, more than a million dollars worth of diamonds have been stolen and Ernest Rochard, the man suspected of being the safe cracker who helped steal them, has his neck slashed aboard a train headed to Switzerland. The victim's daughter, Nicole (“Susan Scott” / Nieves Navarro), is called in for questioning by the authorities but insists that her father didn't give her anything nor does she have any idea where the diamonds may be. Nicole is a popular cabaret dancer who works at numerous glitzy clubs around the city. During one of her patented acts, she wears bronze make-up, an Afro wig and a diamond thong bikini. Her unemployed and immature boyfriend Michel (Simón Andreu) gets turned on seeing her “all blacked up” and is game for a dressing room quickie in between shows, but he's still sick of her always being so busy and barely ever seeing her, plus jealous of all of the male customers who drool over her. However, until he finds work, she must continue to shake her tits and ass all over Paris as their breadwinner.

After one of her shows (this one with her decked out in a gold ensemble and slathered with glitter), Nicole receives a phone call from someone disguising their voice and threatening “If you don't want to end up like your father, tell me where the diamonds are!" She rushes home only to be greeted by her useless drunk boyfriend tossing a switchblade at her head and complaining about people calling him her gigolo. After he leaves, a blue-eyed man dressed in black and wearing a hood, sneaks in through the window of her apartment, strips her down to her bra and panties and threatens to slice her up. He leaves without physically harming... this time. He promises his next visit will be nastier if she doesn't “remember” where the diamonds are. Problem is, she really has no clue. After finding blue contact lenses in Michel's medicine cabinet, Nicole figures it's time to split town. Thankfully, she's recently gotten acquainted with a frequent presence at her shows, the friendly Dr. Robert Matthews (Frank Wolff), who is so smitten with the beauty he hops from club to club so he doesn't miss a single show. Without hesitation he agrees to bring her back home with him.

Upon arriving in London, Robert wines and dines Nicole and takes her on expensive shopping sprees. The two quickly become lovers and she doesn't even seem to mind that he's still technically married his (rich) wife Vanessa (Claudie Lange) because the two are separated and he promises to divorce her so they can marry. The two eventually run off to a small, quiet village where Robert owns a nice country home. The locals aren't only old fashioned but also incredibly strange and gossipy. Nicole immediately gets bad vibes from many in the area, including weird caretaker / handyman Hallory (Luciano Rossi), voyeuristic boat builder Captain Lenny (George Rigaud) and a priest who talks with a voice box that sounds very similar to the stalker back in Paris. Someone also begins spying on them with binoculars and reporting their bedroom activities back to the rest of the village. Robert is away in London a lot and during one of his trips someone stops by the home and gives something to Nicole that upsets her. She disappears soon after.

Later, while Robert is in the middle of performing an eye operation on blind patient Mr. Smith (José Manuel Martín), someone enters his office and shoots him. He manages to survive the attack but all the witness can really convey to the cops is that he heard a sound similar to that of high heeled shoes. Soon after, some village fishermen find a surprise in their net: Nicole's corpse. That brings up a lot of possible suspects in both her murder and Robert's attempted murder, including many of the townspeople as well as Vanessa, who at one point attempted to pay Nicole 5000 pounds to leave her husband for good. And wouldn't ya know it, Michel has flown there all the way from France and is found hanging out in the village. Drunk, of course. It's up to Scotland Yard Inspector Baxter (Carlo Gentili) and his assistant Bergson (Fabrizio Moresco) to figure out just what's going on.

I really have to hand it to these people for having me, completely losing me and then miraculously not only getting me back by the end but also winning me over. I found myself enjoying the first 30 or so minutes (several silly 70s dance routines certainly helped), not liking where this was going in the middle and finally absolutely loving where they finally went with everything they'd already set up... even the stuff I didn't like watching! You will need to patiently stick with this one through many bumps, detours, dull patches, red herrings and seemingly pointless story elements to experience the full joy of this little roller coaster of a giallo. Thanks to a sharp script by the uber prolific Ernesto Gastaldi and “May” (Mahnahén) Velasco, how this manages to tie together the numerous characters and plot threads is rather ingenious. Not only will it please fans of Italian thrillers, but it also touches base with exploitation fans. There's at least one very gory knife murder and lots of long, lingering shots of the leading lady wearing a fine selection of bikinis, lingerie or sheer clothing (or nothing at all). 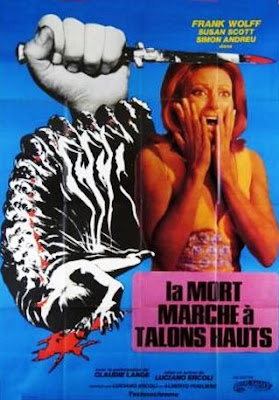 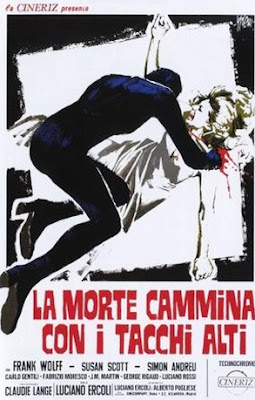 Navarro married Ercoli a year after this was made, starred in five of the eight films he directed and remained married to him until his death in 2015. Reportedly, the director bowed out of show business in the late 70s after inheriting a fortune from a relative. Navarro, on the other hand, would make occasional appearances in sleazy films until the early 90s even though she probably didn't have to. Co-star Wolff, a winner of several Best Actor awards while a theater student at UCLA, decided to take Roger Corman's advice and attempt a career in Europe after a lack of success in the States. He ended up becoming a well-known star in Italy; appearing in numerous hit spaghetti westerns and thrillers. In 1971, the same year this was released, he committed suicide in the bathtub of a hotel. I've not seen much of his work thus far, but he gives a devilishly good performance in this one. The score is by Stelvio Cipriani, who did the music for several hundred (!) Euro exploitation films. 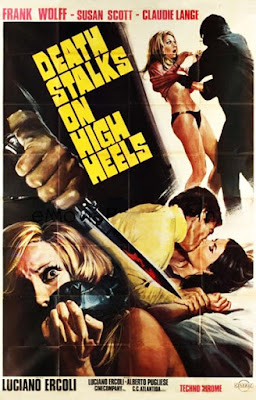 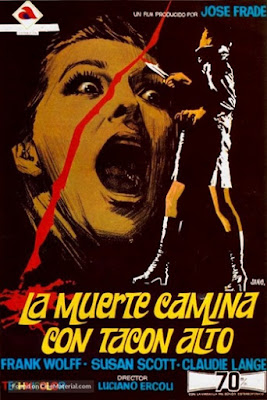 Never released theatrically here in the U.S. and completely missing out on the whole 80s and 90s VHS cycle entirely, this wouldn't see the light of day here until the 2006 No Shame DVD release. In the UK, both this and Ercoli's follow-up Death Walks at Midnight (1972), which features many of the same actors as this one, were released in a box set called “Death Walks Twice” by Arrow Video.