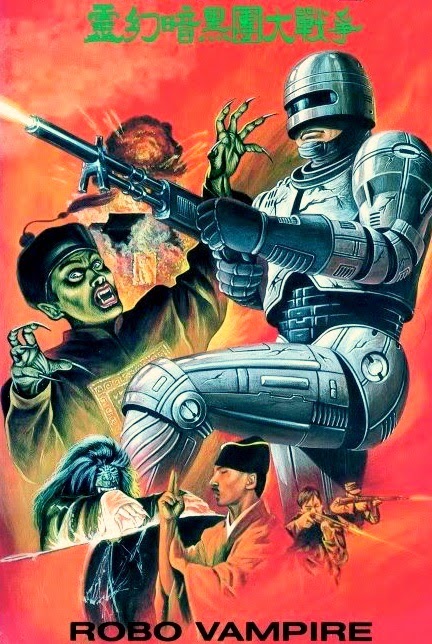 
Utilizing many different aliases, Godfrey Ho made dozens of movies in just a ten year time span from 1980 to 1990. After a brief tenure at Shaw Brothers in the mid 70s, Ho worked primarily for two companies: one he himself started along with former Shaw colleague Joseph Lai (ASSO Asia Film / IFD Films & Arts) and Tomas Tang's Filmark International Ltd. The two companies are often confused with one another because they frequently made movies the same exact way... and that way was the cheapest and laziest way imaginable! Their process began with acquiring the rights to Asian films that were either unfinished or films thought to be un-releasable to English-speaking audiences. These films were then completely re-cut (removing huge portions and completely altering the original plots in the process) and had brand new cheaply-shot footage added to the works, most often involving ninjas because they were big at the time and featuring the same stable of Caucasian non-actors. The footage was then all cobbled together with an English-dub laid over top trying to make sense of it all. And just like that they had "new" films to market and sell to unsuspecting Western audiences. American director Jerry Warren had previously pioneered this technique with movies he'd acquired from Mexico, Chile and Sweden, but he never made a cottage industry of it like Ho, Tang, Lai and Lai's wife Betty Chan did. 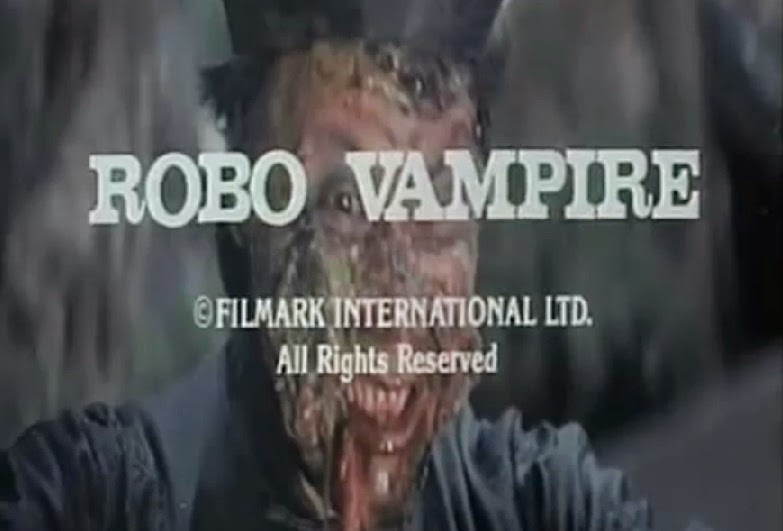 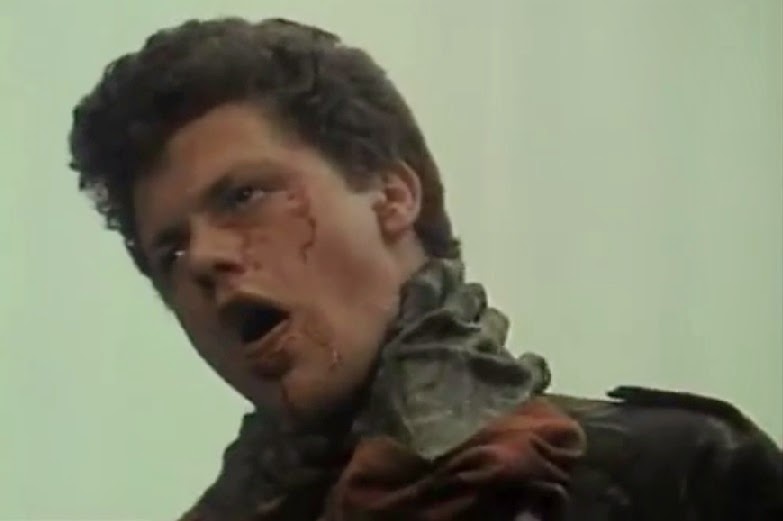 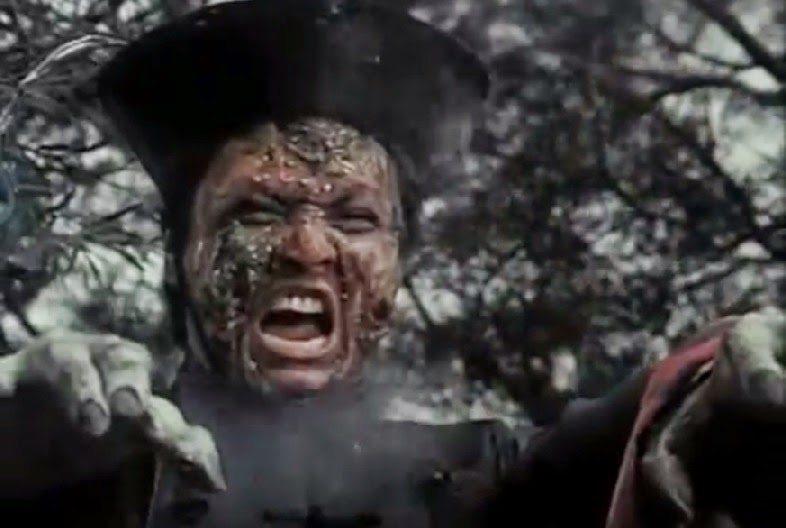 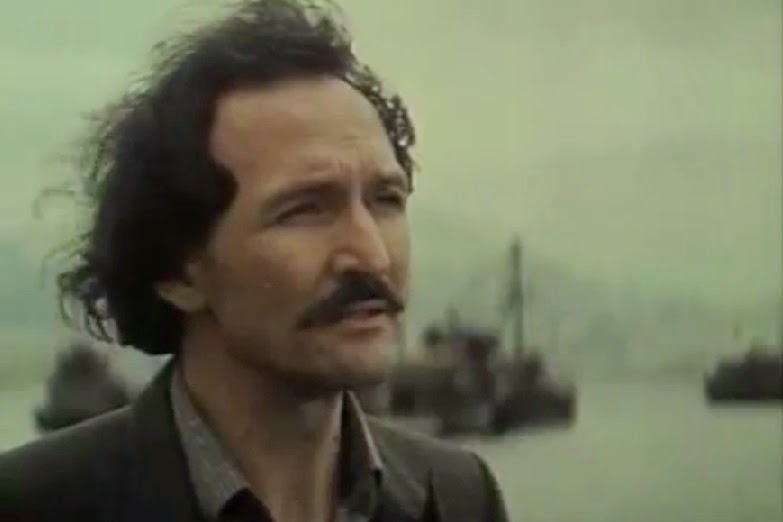 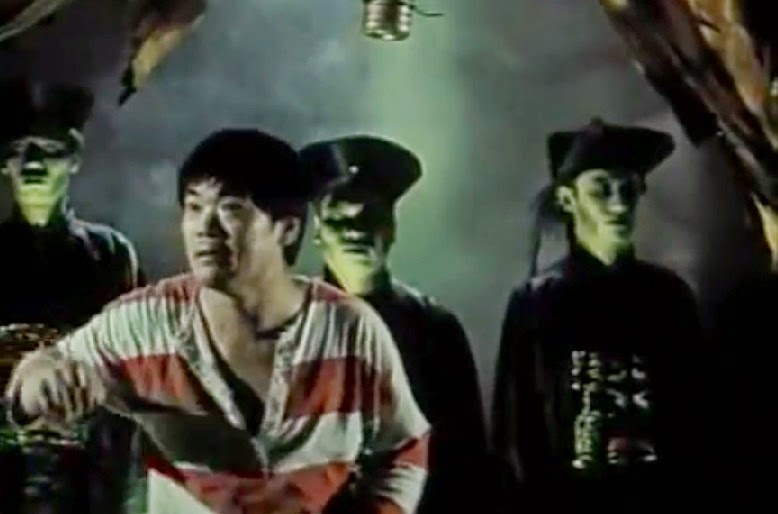 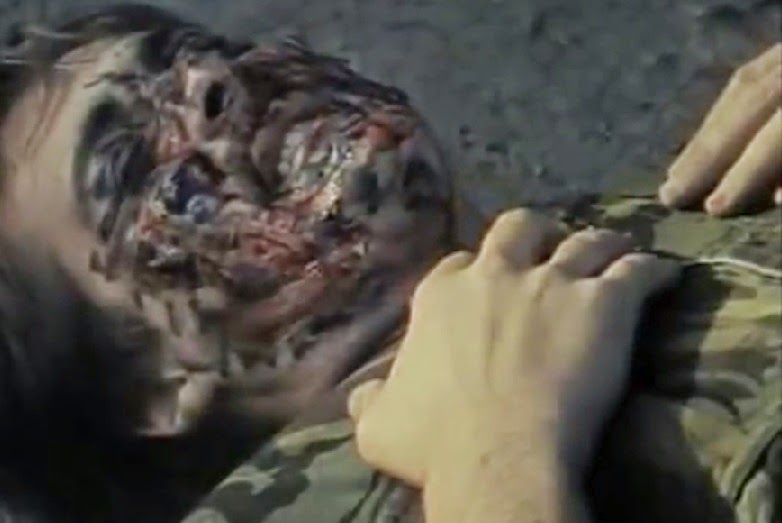 Robo Vampire is one of Ho's Filmark movies and it's a cheap rip-off of both Robocop (1987) and Ricky Lau's popular MR. VAMPIRE series, which started in 1985. Actually, despite the title, this is more a rip-off of the latter than the former. The very first scene features a pair of American soldiers, Asian drug dealers, snakes, explosions and a hopping (and flipping!) vampire that bites a huge chunk of flesh out of one guy's neck. That's followed by a comic scene right out of the Mr. Vampire series as two bumbling idiots - Ken (Sun Chien) and Tony (Chiang Tao) - have a slapstick fight with more reanimated hopping vampires that involves the usual smoke, sparks, spell papers, crotch hits and lids levitating off of coffins, as well as a flying chicken (?!) and a Ching-Ying Lam knock- off Taoist Priest (played by Suen Kwok-Ming) with bushy eyebrows. Only in this film, the priest and his underlings are actually bad guys working on "The Vampire Project" for a Caucasian HK drug smuggler named Boss Coles. 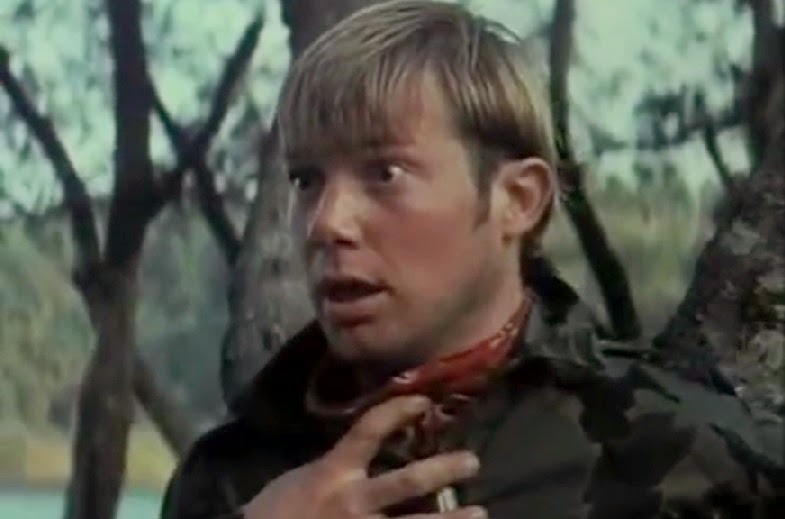 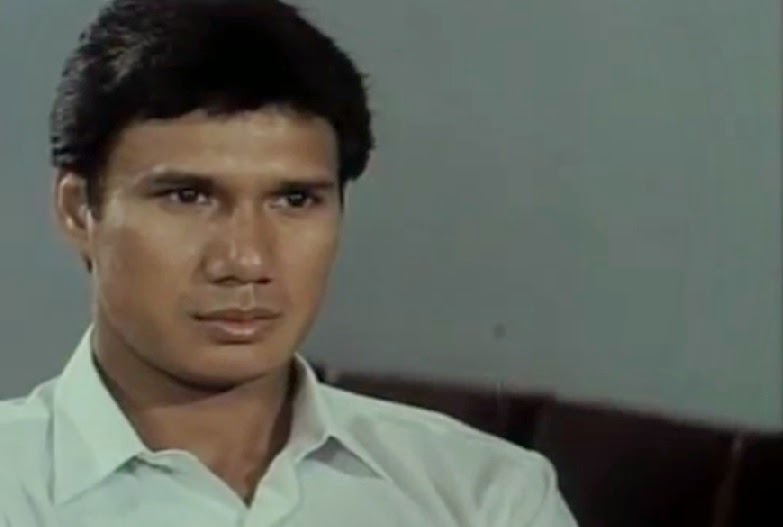 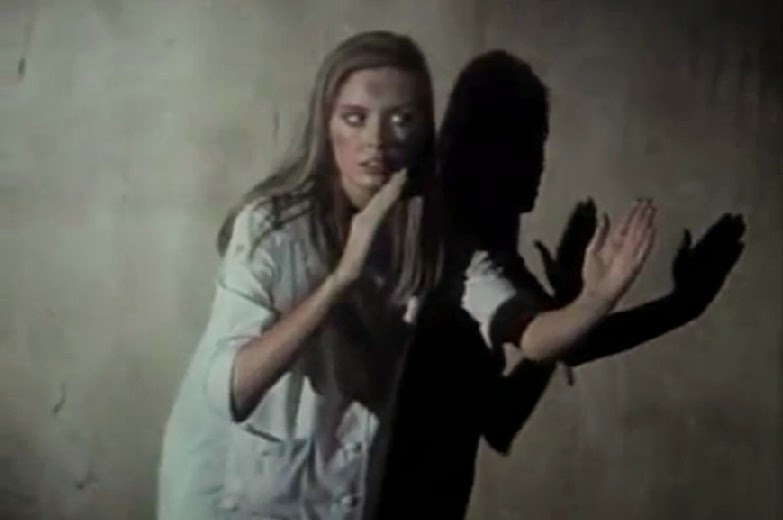 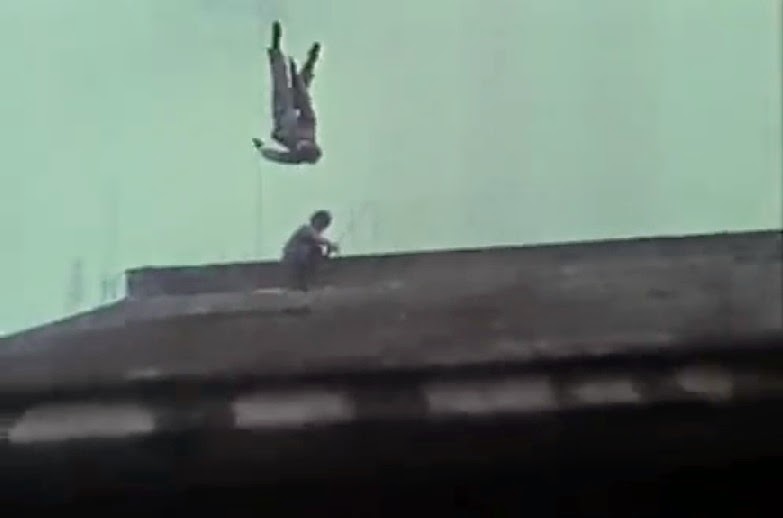 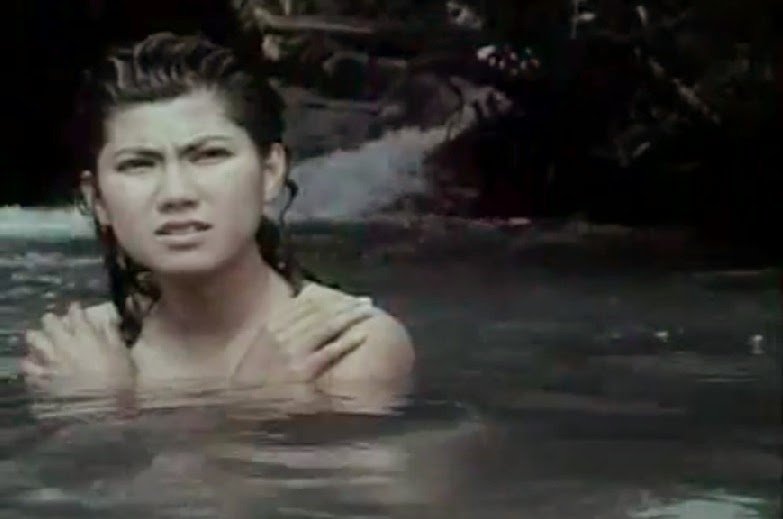 The priest believes that "All anti-drug agents... should... be terminated... AT ONCE!" and eventually gets a lady ghost named Christine and a rotten-faced, long-haired acrobatic zombie named Peter (who later want to "consummate" their post mortem romance!) on his side. He uses them to defeat a group of American soldiers, killing an anti-drug agent named Tom in the process. Tom's body is taken to a lab, where a group of scientists decide to turn him into "an android-like robot" i.e. an incredibly-cheap- looking RoboCop clone they dub "Robo Warrior." The new robot crime fighter speaks in an electronically-altered echo voice and battles all of the bad guys in numerous scenes featuring gratuitous machine gun firing and karate fights, shoddy wire work and even shoddier editing and continuity. Since that was apparently not enough action for a single film, the movie then splices in scenes from a Thai action movie featuring hunky Sorapong Chatree (KRAI THONG) as Ray, a mercenary-for- hire who sets out to save an American narcotics agent named Sophie who's being held hostage and tortured via the Chinese water drip method. 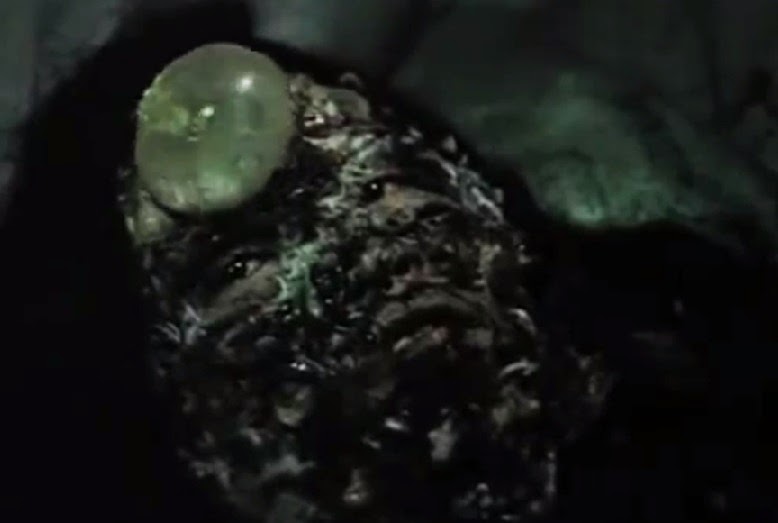 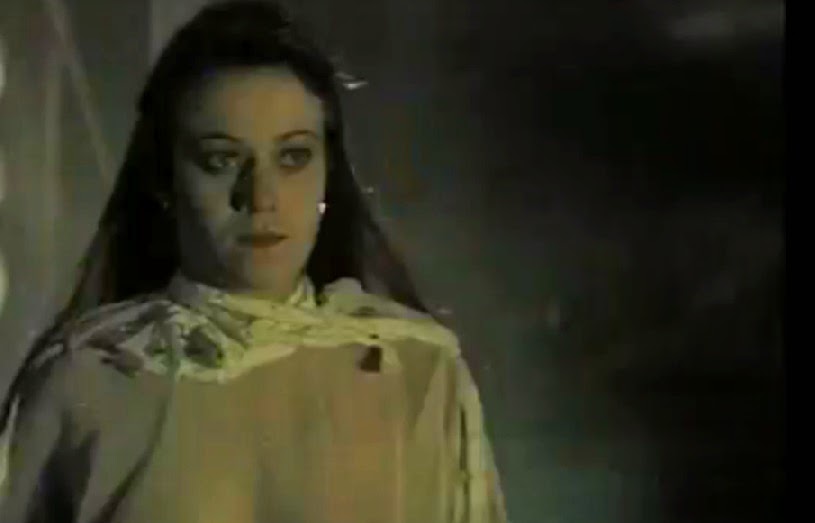 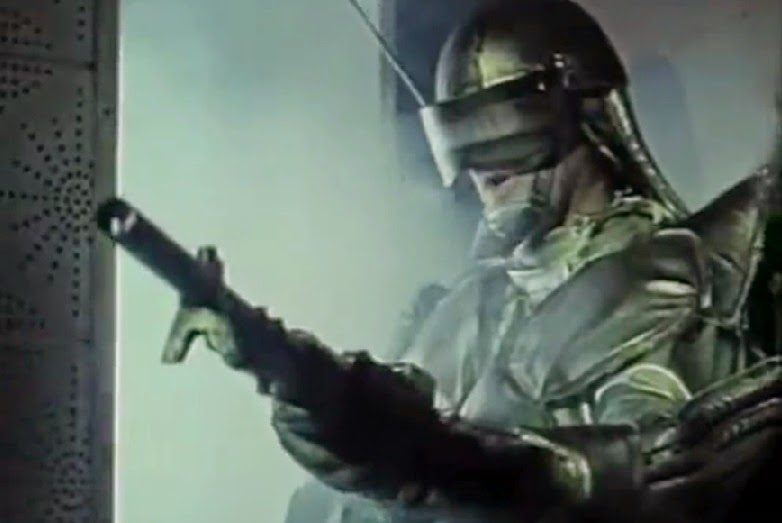 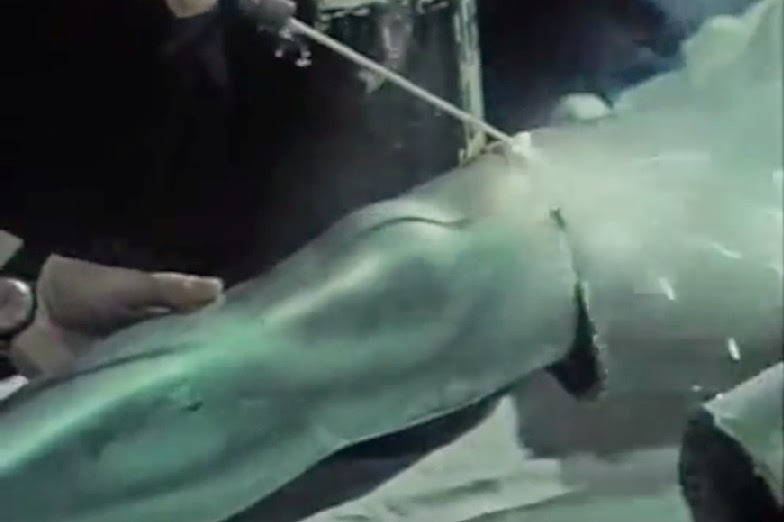 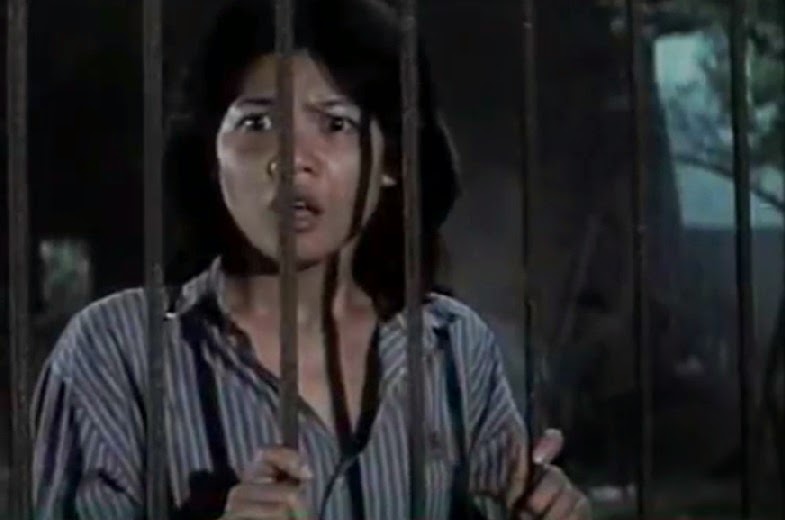 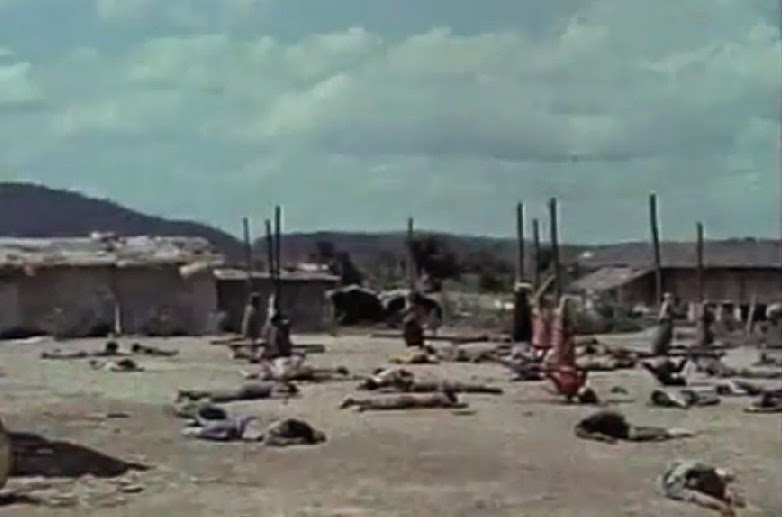 The female ghost wears a sheer dress the entire time and goes topless for an entire fight scene and there are other strange moments like Robo -Warrior being blown up with a rocket launcher and being reassembled a second later, a woman cutting open a cow carcass and stuffing bags of drugs inside and a massacred village where dead children litter the streets and corpses hang from upside down crosses. While this has its share of fun dumb moments (most due to laughable dubbing), it's extremely difficult to follow, the non-stop chaotic action becomes numbing after awhile and the added Thai footage - which makes up around half of the finished film - constantly interrupts the flow of the crazy HK footage and is downright dull by comparison. In other words, this isn't an easy film to sit through. 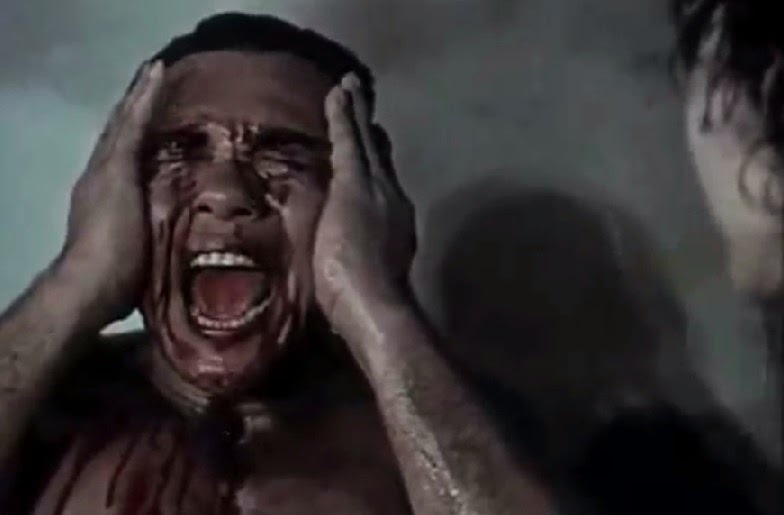 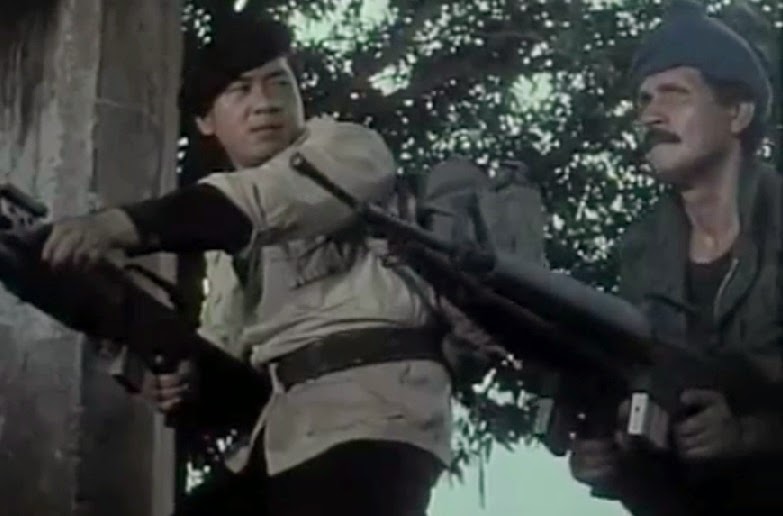 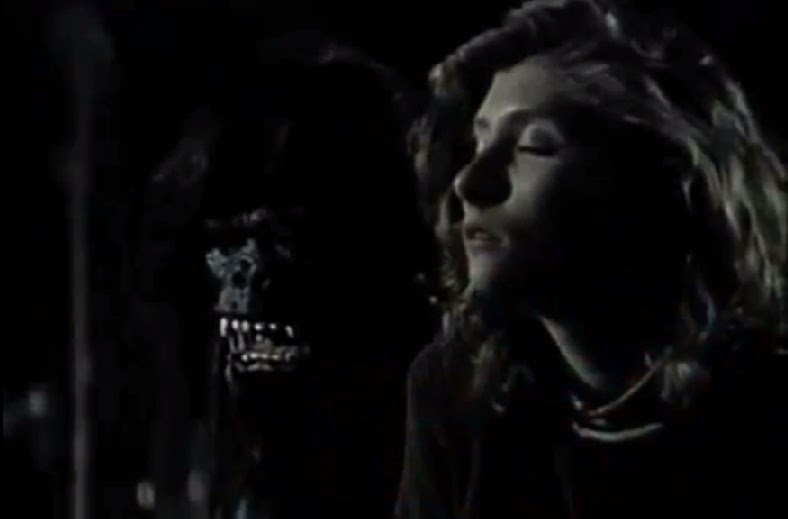 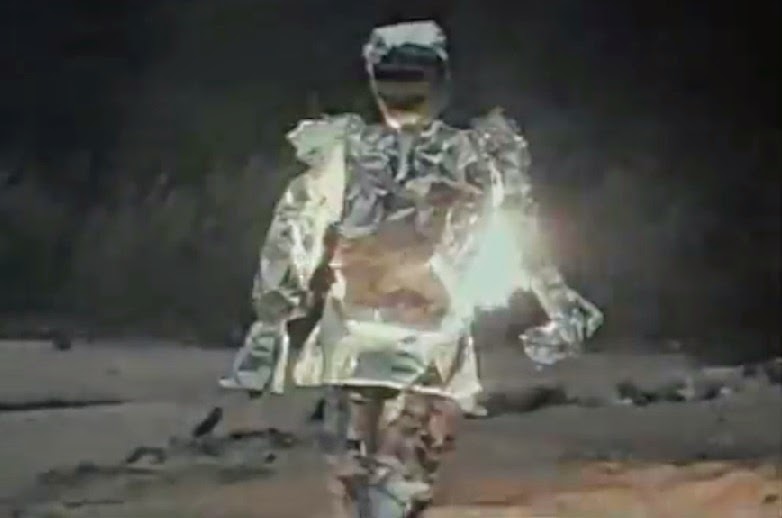 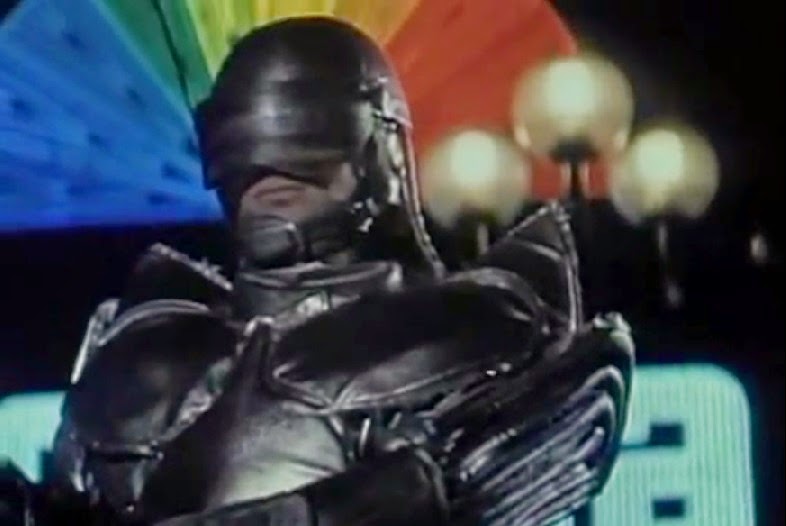 The same team previously made Devil Dynamite (1987), which is similar to this one in many ways, including the whole criminal underworld / drug smuggling angle, the hopping vampires, the evil priest and a crime fighter dressed in a cheap-looking silver outfit (though one's a super hero and the other's a robot). This is a slight improvement over Dynamite, which admittedly isn't saying much. Both Dynamite and Robo Vampire are, respectively, the first and second entries in what some fans have dubbed "The Robo Warrior Trilogy." The third and final entry in this unofficial series is Counter Destroyer aka The Vampire Is Alive (1989).

It's also worth pointing out that in a joint interview with the websites HKCinemagic and Nanarland (read it RIGHT HERE), Ho himself denied making some of these films, which are possibly falsely accredited to him. In the interview, he claims "The only names I used are Godfrey Ho, Benny Ho, Godfrey Hall or Ho Chi Keung. Other names are not me." However, that doesn't take into consideration the common practice of Anglicizing names by distributors, which could have easily been done without his knowledge. They did so with most of the actors and crew people in nearly all of these films, so why not him?