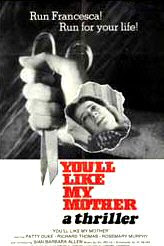 Directed by:
Lamont Johnson
Young widow Francesca (Patty Duke) travels via bus to a small, snowbound Minnesota town to visit the mother-in-law her late soldier husband (who was killed during the Vietnam War) was dying to introduce her to before his untimely passing. Immediately upon arriving, Francesca is shocked to find herself greeted with outright cruelty from her husband's bitter, icy mother Katherine Kinsolving (Rosemary Murphy). Mrs. Kinsolving claims she knew nothing of her son's marriage, doesn't hesitate to tell her she's not wanted there, insinuates that all she cares about is money and suggests Francesca, who's very pregnant and about to pop at any moment, give the baby up for adoption! Also living in the home is mute, mentally retarded Kathleen (Sian Barbara Allen), a sister the husband failed to mention even having. Francesca plans to leave as soon as possible and catch the first bus out, but finds herself stranded when her mother-in-law's car won't start. The weather gets worse, the roads are eventually blocked off and she finds herself in a hellish situation with people who may or may not be who they actually claim they are, including Kenny (a pre-Waltons Richard Thomas), a family "cousin" who's lurking in the shadows and might be a rapist and murderer on the lam.
.
Francesca's food and drinks are drugged, she's locked up in an upstairs bedroom and finally ends up going into labor. Mrs. Kinsolving, a nurse, helps her during delivery, but claims the baby is stillborn and orders her daughter to dig a hole and bury it in the backyard! Kathleen may not be all there, but she's a good-hearted type who has instead hid the baby in the attic. She also scores a key for the room and gives it to Francesca, so she can sneak out to care for the baby until the snow clears and there's an opportunity for her to escape.
.
Based on a then-popular novel by Naomi A. Hintze, adapted for the screen by Jo Heims (who'd just scored with PLAY MISTY FOR ME), this extremely unpleasant but absorbing and compelling psychological horror tale manages to separate itself from similar films in a variety of ways. On the outset, it may remind one most of the 1965 Hammer effort DIE! DIE! MY DARLING! (1965), but it's completely without that film's over-the-top camp appeal contributed mainly by the larger-than-life presence of Tallulah Bankhead. Here, the premise is disturbing and completely plausible. The wintery atmosphere, and the feel of being trapped and isolated, is milked for all its worth and the suspense and tension are both expertly modulated throughout. The sick relationship that unfolds between Mrs. Kinsolving and Kenny is done with a fair amount of tact. Best of all, the director has managed to get four outstanding performances from his actors.
.
I just recently gave Duke a hard time for her shrill portrayal of Rosemary in LOOK WHAT'S HAPPENED TO ROSEMARY'S BABY (1976), but she gives a terrific performance in this one. You genuinely feel invested in her character (she's poor, doesn't have a family of her own, has recently lost her husband and now finds herself in this horrible situation) and care about what happens to her and her little baby. Ditto for the little-known Allen (who received a Golden Globe nomination for her work here), who's excellent in a memorable role as the abused Kathleen, a role that requires her to convey everything through unintelligible grunts and facial expressions alone. The usually wholesome Thomas is suprisingly creepy and Murphy is perfection as the ice cold mother-from-hell.
.
One minor flaw here is the clumsy use of voice-over narration to convey Francesca's inner thoughts. Though thankfully only used a couple of times, it struck me as being completely unnecessary. Sometimes erroneously listed as a made-for-TV movie, this actually received a limited theatrical release in 1972 via Universal before making its TV debut a year later on NBC.
.
★★★1/2
Posted by The Bloody Pit of Horror at 10:11 PM No comments: