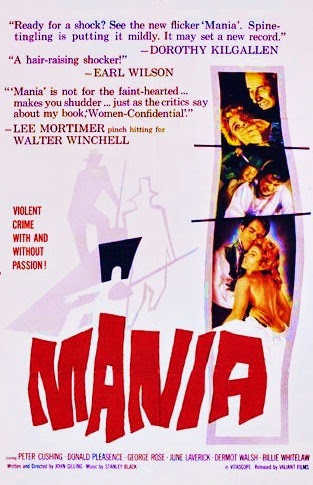 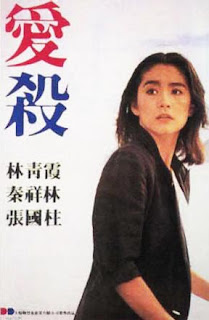 ...aka: Love Massacre Directed by: Patrick Tam I've never seen the point of always using white subtitles. Why can't they use yellow or neon green or some other color instead? Sure, white is fine for darkly shot films and sure, it might look less tacky than a more gaudy color, but for films like this one - which mostly takes place in the daytime and features characters constantly wearing white clothing and cropped shots with white pillows and white tableclothes constantly showing up at the bottom of the screen - using white subs is an extremely poor choice. On the plus side, this one's not hard to follow even when you miss some of the dialogue. It's your garden variety "psycho lover" flick; a subgenre of horror that features a protagonist dating, marrying and/or having sex with a seemingly normal person who turns out to be a psycho who then terrorizes them. Clint Eastwood's PLAY MISTY FOR ME (1971), about a radio being stalked by an unstable former listener/lover, is one of the earliest contemporary examples of this subgenre. Years later we'd have such box office hits as FATAL ATTRACTION (1987) and BASIC INSTINCT (1992), which then spearheaded a huge amount of direct-to-video or cable "erotic thrillers" with almost identical plotlines. LOVE MASSACRE is a fairly early example of this kind of film. It's a Hong Kong production that was filmed in the United States in 1981. There's no nudity or eroticism like in the later films, but there is a decent amount of violence if you can wade past the incredibly slow first hour. Emotionally disturbed college student Joy (Tina Lau) slashes her wrists when her boyfriend breaks up with her. She recovers from the attempted suicide, but suffers from bad headaches and fainting spells and seems to strongly disapprove of her friend Ivy (Brigitte Lin), who attends the same California college she does, dating her brother Chiu Chung (Kuo Chu Chang). Joy is killed in a car accident and Chiu Chung tells Ivy he needs to return to Hong Kong for an extended stay but will be back. While he's gone, Ivy learns some surprising things about her new boyfriend. For starters, he forgot to tell her that he's already married and has a child back in Taiwan. He also forgot to mention that he and his sister were institutionalized at one point and both suffer from a "hereditary" psycho disorder. Ivy reads in the Hong Kong paper than an unemployed engineer had killed his wife and then disappeared. Putting two and two together, she comes to the conclusion that Chiu Chung is the nutjob responsible. Unfortunately for her, he's already headed back to the U.S. to ask for her hand in marriage. Chiu Chung shows up, starts acting psycho and confesses he'd killed his family so he can be with her. Ivy flees and goes and visits her photographer friend Louie (Charlie Chin). Meanwhile, Chiu Chung decides to break into Ivy's dorm. When he discovers she's not there he decides to pass the time by grabbing a kitchen knife and slaughtering all of her housemates. He gathers them all up, ties and gags them, then begins killing them one by one. One is slashed to death in bed, another gets her head slammed in a door, a throat is slashed, a neck is snapped and a face gets stabbed through a pillow. I don't know if I got ahold of a cut version or this or not, but the camera seems to cut away each time the murders threaten to get too violent. You'll see the beginning of each kill, but then it quickly cuts away before it can get gory. The editing in these scenes is terrible. Ivy eventually shows up and encounters a blood-soaked Chiu Chung on the rooftop for the big finale. It's a seldom-seen film here in the States, but I definitely wouldn't go out of my way to acquire a copy of this one. The acting's mediocre, the premise is worn out and this thing takes forever to get going. In fact, the big dorm massacre doesn't take place until the last 20 minutes. The rest of the time is spent setting up the fact that the boyfriend is a psycho, which is something pretty evident early on in the film. The director and cameraman do at least try to be artistic at times, and occasionally manage to spice up this otherwise ordinary film, just not nearly often for this to be of much interest. The cast includes Patrick Kong Lung (who also co-produced the film) and Ann Hui (who'd go to an acclaimed career as an award-winning director). I also need to point out that the other websites I visited list this as being solely a drama, when it's most definitely a horror/thriller.
★★
Posted by The Bloody Pit of Horror at 5:59 PM No comments: