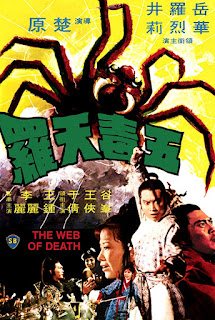 
Members of a sect of fighters called the Five Venom Clan, or Spider Clan, call for a meeting. Due to several other clans recently rising to prominence and expanding their empires while they remain stagnant, several members suggest they attend the Mid-Autumn Festival to compete for the title of "King of the Boxer World." Claiming he's interested in restoring their status, Liu Shen (Lieh Lo) asks leader Chief Hung (Hsieh Wang) for permission to use the clan's nearly-invincible weapon: The Five Venom Spider. The normal-sized though immortal tarantula roars like an elephant (!), is capable of shooting out vast amounts of electrified wire webs that can kill large groups of people at once and has other special powers. However, the spider has been hidden in a secret location for a century now and the chief is refusing to tell anyone its whereabouts. Due to its power, he feels it's in the best interest of humankind if the weapon stays buried forever. For if it falls into the wrong hands, it could lead to the destruction of the entire world. Several of the clan members disagree with the chief's decision but are unable to convince him otherwise.


Liu Shen, who's already carrying on an affair with the chief's wife Yi Liang (Angela Yu Chien), decides to conspire against his leader as a power grab. As far as the other clans are concerned, the Five Venom Spider no longer even exists. However, Liu Shen floats around a rumor that it does, which results in representatives from the other clans convening to map out a course of action just in case. They decide to send skilled swordsman Ying Hsiung Fei (Hua Yueh), of the Wudang Clan, to the Fujian region, home of the Spider Clan, to look into matters. While in the area he's to stay in the safe zone of the sacred San Xiu Tai temple, where he has allies.

Upon arrival, Ying Hsiung crosses paths with a dirty, mischievous beggar in a restaurant who's trying to skip out on the bill. After deciding to pay it himself to stop the ensuing fight, he learns that the beggar, whom everyone assumes is a teenage male, is actually female. She - Susu (Li Ching) - follows Ying Hsiung to the temple and offers to help him out. She claims to have a friend of a friend of someone in the Spider Clan, so she'll be able to get insider information that way. In actuality, she's the trouble-making (though good-hearted) daughter of the Spider Clan chief. She goes to her father and gets him to admit that he knows exactly where the Five Venoms Spider is: hidden in a tomb that's off-limits to all. Eavesdropping on their conversation, Yi Liang relays the information to Liu Shen.

Deciding he's going to need help finding the Spider, Liu Shen enlists the aid of the rival Holy Fire Clan and sends them a map to the tomb's whereabouts. Once they get there and various members are killed by the booby traps (a falling spiked gate, a pit of acid), the men flee. However, Ying Hsiung's brother Yingjie (Chung Wang) shows up and decides to risk it. While he manages to evade the booby traps, Susu and her servant Xiao Cui (Mei-Hua Chen) catch him and hit him with a poison dart. Once Susu discovers she's critically injured Ying Hsiung's brother, she hires Security Chief Xie (Yang Chiang) and his men to transport both Yingjie and a package to Mount Wudang where they'll both be safe. However, on the trip there, Xie discovers the spider is in the package. He massacres his crew, leaves Yingjie for dead and takes the spider right to Liu Shen. Unwilling to share power, Liu Shen kills him and the rest of his men and takes the spider.

Liu Shen immediately uses his new power to kill the Five Venom Clan leader and take control. After a quickie impromptu wedding, Susu and Ying Hsiung manage to escape back to Mount Wudang. There, she sparks the ire of the jealous Qiuxin (Lily Li), who's in love with Ying Hsiung, while trying to conceal the fact she injured his now-crippled brother. And, as if things couldn't be any more complicated, both Susu and Ying Hsiung are falsely implicated in all of the killings that Liu Shen and his cronies are responsible for. But the truth will finally come out when all of the clan leaders show up to get to the bottom of things and Liu Shen swings by with the Five Venom Spider and attempts to kill everyone.


Sound confusing? It IS! Characters run around constantly referring to entities like the "3 Heroes of West Moon," "7 Buddies of Heisong" and the "Saint of Wudang" without bothering to explain what any of that is. There are numerous clans with numerous masters and a descending pecking order from there. The Spider Clan, for instance, has ranking members with scorpion, toad and centipede designations, but we're never told what any of that means. There are bad apples in several clans who are aligning with bad apples from other clans, each with their own agendas, and the resulting double-crossing, lying, spying, false identities and backstabbing, only makes things more confusing. All of these needless characters ensure the numerous fight sequences are a clusterfuck where you often can't tell who is who, what is what and why they're even fighting in the first place. I had to constantly stop the DVD and jot down notes as this went along for fear I'd be unable to provide a coherent plot synopsis otherwise!

While I had a hard time dealing with the first half, this finally settles into a more coherent groove for the rest of the duration and ends up being pretty fun. There's plenty of smoke, sparks, fire, wind, laser effects, explosions, sword fights, stunts and blue, red and green lighting, plus lots of silly reverse shots of characters jumping backward tens of feet onto things like ledges, bridges and rooftops.


The bewildering eight legged secret weapon results in some memorable moments when it's used, but the absolute best thing here is the production design. The sets are all fantastic, especially the amazing Five Venom Clan headquarters, which has a big gold throne with dragon heads, trap doors, secret passageways, spider-stamped stone walkways over a pool of bubbling acid, fire-breathing statues and a giant red spider with green flashing eyes. Exactly like with Hammer in the UK, even when Shaw Brothers aren't at their very best, at least you can count on the production values to be solid. 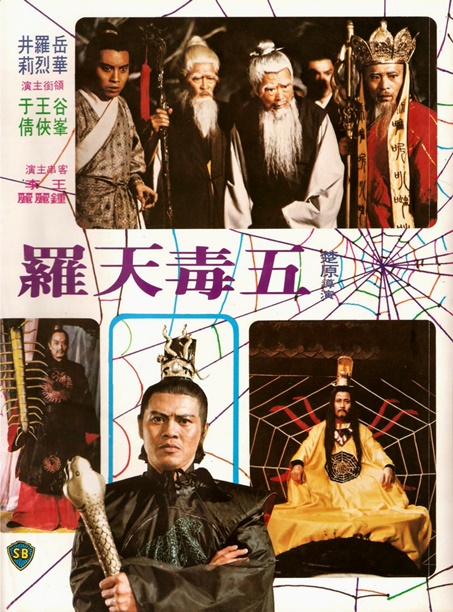 The cast also includes Miao Ching as the Wudang Clan leader, Feng Ku, Shen Chan (RETURN OF THE DEAD), Norman Chu (SEEDING OF A GHOST) and Fei Ai (BEWITCHED) in an early, non-speaking role. The director also made The Ghost That Was Not (1961), A Mad Woman (1964), Bat Without Wings (1980), the troubled anthology Haunted Tales (1980; Chor actually filmed his contributions back in 1975), Black Lizard (1981) and The Enchantress (1983). 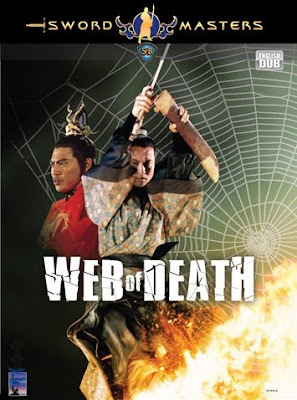 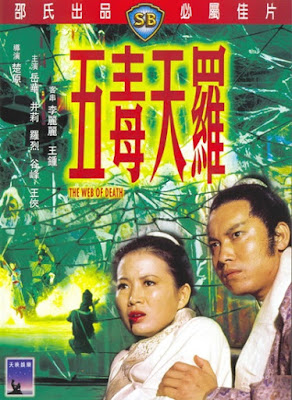