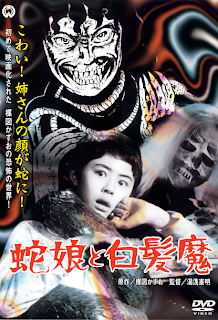 
Up until this point, young Sayuri Nanjo (Yachie Matsui) has had to live most of her life in a nun-run boarding school for orphans and away from her parents. That's all about to change when her real father (Yoshirô Kitahara) mysteriously comes to get her and finally bring her home. As soon as they pull into the driveway, an ambulance is leaving. They've come to pick up the body of one of the maids, who they claim died of a heart attack. We, however, know better. We've already seen someone wearing black gloves toss a poisonous snake at her in the pre-credit sequence. And that's not the only strange thing going on. In Sayuri's absence, her mother Yuko (Yuko Hamada) was involved in a car accident which wiped her memory clean of everything that occurred beforehand. Now she's absent-minded, addle-brained and needs to rebuild her relationship with her daughter from scratch. Dad is a toxicologist who studies poisonous animals and has a collection of snakes, scorpions and other dangerous insects and reptiles in cages downstairs in his basement lab. Not to mention a huge vat of acid (?!)

Dad receives a call from a colleague about a new species of snake that's been located and immediately has to go to Africa for several weeks. Later that night after he's left, Sayuri starts to notice bizarre things. Her mother talks to herself and to Buddha, wants her to keep secrets from her father and drops off a plate of food late at night, which soon disappears into thin air. There's a hole in Sayuri's bedroom ceiling where someone peaks in on her and slips snakes through at night to scare her. She eventually sees a creepy, shadowed figure in her room, who her mother eventually introduces to her as Tamimi (Mayumi Takahashi), her until-now unmentioned older sister. So why didn't either parent tell Sayuri she had a sister? And why does she spend all of her time in her bedroom, locked away like some dirty secret? Sayuri will soon find out since she gets her mother to let the two of them share a bedroom.

Tamimi is mean, throws a doll at her sister and then rips its head off. She's cold to the touch and a scratch mysteriously appears along the outside of her face. Sayuri has a weird dream complete with psychedelic swirls where her doll comes to life, grows to normal size, grabs her hand and the two fly toward the dad's lab. They're stopped by Tamimi, who transforms into some kind of witch / vampire who throws snakes at them and then feasts on the doll's blood (?) When Sayuri wakes up, she finds large snake scales on the bed. Tamimi continues to behave strangely, rips a frog in two and then throws it in Sayuri's face. She finally confesses to being a snake and tells her little sis that "I just want to taste your soft little hands!" Dad's gone, mom's not right in the head and can't help and the stern maid Shige-san (Sachiko Meguro) accuses her of lying about everything and seems to be playing dumb.

Much of this seems almost to be a parable about mixed families and sibling rivalry. Tamimi rules the roost in her father's absence and has so much power over her mother and the maid she eventually has Sayuri banished to the attic! While there, the little girl has more weird trip out fantasies, which involve everything from giant spiders, to fighting a giant snake with a sword to the titular silver-haired witch popping in to scare her. That witch finally materializes in real life, as well, though there's a silly twist to all this.

Snake Girl , which is based on a comic by Kazuo Umezu, tries to have it both ways. It wants to be an uplifting family-friendly fantasy film for kids, but it also wants to be a horror flick for everyone else. This at-odds combination results in a wacky hybrid that adult fans of bizarre cinema may want to check out but any sane parent shouldn't let their child anywhere near. Well, unless they don't mind their little ones watching a nun get stabbed to death, animals being tortured and killed or a finale where our little heroine is dangling from scaffolding while someone smashes her hands to a bloody pulp with a plank of wood trying to make her fall to her death!

Sayuri is a plucky, syrupy sweet and impossibly patient young girl who tries to see the good in everything and everyone, but it's to the point of being extremely annoying to watch. No kid on Earth is going to react to all this horrifying stuff with such poise regardless of how mature they are. The character also constantly talks to herself and there's a continuous, often redundant voice-over where she analyzes the events in her mind as they unfold. Being the mean-spirited SOB that I am, I have to admit that I didn't feel the least bit sorry for that little bitch Tamimi either. She's such a sadistic, shrill tyrrant throughout this movie that when they finally tried to pull out the sympathy card at the very end, I was too busy cheering her demise to really care. Can't say this movie affected me in any emotional way, as was intended, but it's certainly imaginative enough to make it worthwhile.