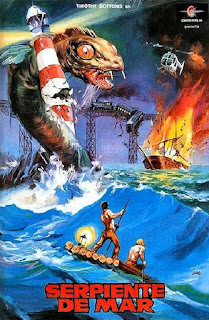 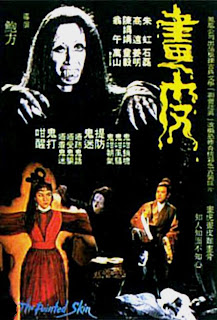 In this slow and somewhat typical, though worthwhile Japanese ghost tale, you'll find solid storytelling, good acting, several good horror sequences and a strong moral to the story. Actually several morals to this particular story. During a pleasant framing sequence that bookends the actual tale, modest writer and "collector of weird tales" Mr. Pu (Sek Lui) has just finished his latest manuscript "The Tales from Liao Chai;" which is a huge success with those in the village. His doctor friend shows up at his home with the good news that he's become famous and the two men, along with a servant boy, sit down for some wine. The doctor then tells him a ghost story he's just heard; one that he hopes his friend will consider writing, which is then visualized for us.

The story deals with Chun-wen Wong (Kao Yuen), a wealthy man who lives in a nice home with his mother (Tung Ngai), brother (Maan Saan), wife (Chen Juan-Juan), young son and some servants. The family is well-off but Chun-wen, a scholar and budding writer, has still been failing his exams and can gain no legitimate title despite having all the enthusiasm in the world. His problem? He depends far too much (and spends way too much) on fortune-telling and horoscope readings than he does actually studying. In other words, he wants wealth and success without actually having to work hard for it. His brother, a successful military man with political aspirations, is about to go away on duty, but warns his brother before he leaves that he can only rely on himself, not faith or Gods or spirits. A traveling fortune teller informs Chun-wen to go to the northwest of the village to the crumbling Kuei Hsing Ko Temple of Literature. There, he prays to a goblin-looking idol and promises that he'll rebuild the crumbling temple if he's granted the good fortune of passing his exams.

Immediately afterward, Chun-wen encounters Mei-hiang Chang (Zhu Hong), a beautiful, weeping woman dressed in white hiding out in the rubble. She runs off, but later shows up at Chun-wen's home. She claims she's from an area over a thousand miles away and ran away on her wedding night after her evil stepmother set her up in an arranged marriage with an ugly merchant. She also claims she's trying to locate her father, who's the Provincial Education Officer in charge of the rural examinations... the same one Chun-wen is having an impossible time passing. Chun-wen, who locks himself in a gated garden house away from his family for his one-month period of study, allows Mei-hiang to stay there for a month in agreeance that she'll pull strings to help him pass. It isn't long before Mei-hiang successfully seduces Chun-wen. He begins to ignore his family, becomes pale, weak and sickly, and rapidly loses weight. That's because the mysterious lady is actually some kind of ghostly, seductive succubus bent on getting her hands on her new lover's heart.

Mei-hiang claims to be oblivious to the fact that Chun-wen is married and has his own family. When she "finds out" he is, she threatens suicide, claims he "ruined" her (i.e. took her virginity), then tries to force him to chose between his wife and her. A weakened Chun-wun is almost coerced at one point into poisoning his wife's tea with arsenic, but Chun-wen slaps the cup out of her hand at the last minute. After her plans there fail, Mei-hiang uses her supernatural powers to lure a male servant into the wife's bed; arranging for Chun-wen to see them sleeping together. Though the wife and servant both proclaim their innocence, Chun-wen throws her out and plans to marry Mie-hiang. The wife attempts to hang herself out in the woods, but her brother-in-law stumbles onto the scene just in time to save her. He goes home and does a hilariously out-of-nowhere effortless leap over a ten-foot wall and then attempts to stop Mie-hiang before she is able to destroy the entire family.

Like many other vintage Asian ghost tales, the one's about 75 percent melodrama and 25 percent horror, and it isn't really going to appeal to certain viewers out there. However, if you don't mind a slow build, this does repay us for our patience by coming up with some great off-the-wall moments at the finale. There's a great sequence where the witchy Mei-hiang lures the sleepwalking servant into the wife's bed, as doors and curtains open and close by themselves along the way. When Chun-wen and his brother see Mie-hiang's true self they see a hideous, wrinkly, blue-faced, fanged old woman, who uses a painting to create her beauty. After she is sliced in the face, she simply covers up the wound on the painting and returns to "normal." During another standout sequence, Mie-hiang (in ugly form) sprays a stream of blood out of her mouth to knock a sword off of the wall, then rips out a human heart with her claws. Good use is also made of shadow throughout the film.

While I did see a haggard print of this rare film (which at least had English subs), it doesn't seem like it would be quite as visually opulent as some others in its category even in restored form, though I could be wrong. The story is also quite set bound, with the majority taking place in just one home. What is recommendable and commendable here is the nicely-turned script and fine acting. The actress playing Mie-hiang seems to be having a great time playing her deliciously evil role. The framing sequences are also nicely done, with writer Mr. Pu finding the relevance and philosophy in the ghost tale: "We have never seen a ghost, but there are people around us who behave like 'ghosts.' They fool people with their good looks. Careless ones will be devoured by them. Keep alert to keep away from them."

I'm not aware of an official VHS or R1 DVD release for this one.