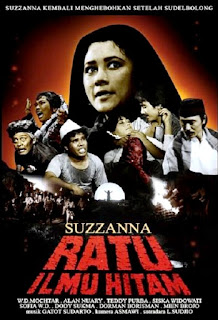 
One of the only Indonesian horror films from this time to receive any kind of theatrical distribution here in America, this was first falsely promoted as a sequel to Shaw Brothers' Black Magic films. One of the early advertised titles was, in fact, Black Magic III. Because someone had actually bothered to dub it into English, it was likewise an anomaly becoming one of the only Indonesian horror films to receive VHS distribution in the U.S.; something it would repeat in the DVD era with a 2008 Mondo Macabro release. The film played at Cannes in 1982 and was released in many other countries, including the UK, France, Japan and Spain. That makes it easily one of Indonesia's most accessible and widely-seen genre films. The only other pre-1990 film I can think of that eclipses it is the delightfully bonkers LADY TERMINATOR (1989), which has (deservedly) gone of to a large cult following.


In Indonesia, the film was a big theatrical hit and one of the highest grossing films of its year. It is also noteworthy as the film that redirected star Suzzanna into a series of horror roles throughout the 80s. Though this wasn't her first genre film (her horrorography goes all the back to 1971), it was the success of this particular performance that typecast her in similar films that she then used as a springboard to become her country's reigning queen of horror. Not only popular with audiences, Queen was also successful with critics and received five nominations at the Indonesian Film Festival (the countries most prestigious and coveted film award), including Best Actress (Suzzanna), Supporting Actor (W.D. Mochtar), Cinematography (Asmawi), Editing (Endang Muksin Hamzah) and Art Direction (the multi-talented El Badrun, who also did the special effects). 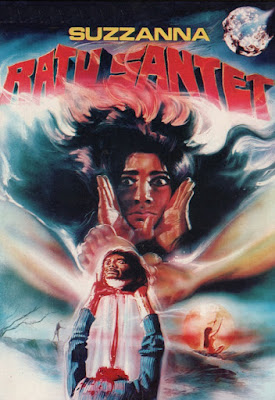 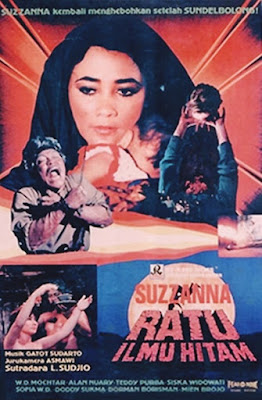 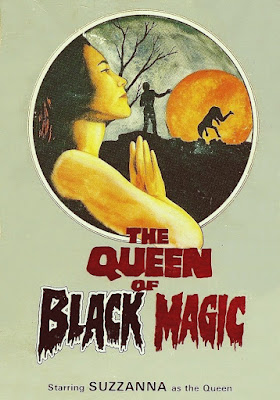 Someone is dead set on ruining the marriage ceremony of Kohar (Alan Nuary) and Baedah (Siska Widowati) and that someone is using black magic to accomplish their goal. Bean sprouts fester with maggots, an uncommonly strong wind tears down decorations, a thunderstorm moves in, a villager levitates and the terrified bride-to-be has hallucinations that her future hubby is a skeleton, the best men are disfigured mutants and strings of flowers are snakes. A witch doctor is called in to help, but he's slammed on the ground over and over again by an invisible demon until he's dead. Kohar instantly blames Murni (Suzzanna), whom he once had a romantic relationship with. If you choose to call it that. After taking her virginity and promising to marry her, he dumped her for Baedah; the not-so-virtuous daughter of the wealthiest and most powerful man in the village. Murni, on the other hand, is merely the daughter of poor widow Zaida (Sofia W.D.). Still, she fell in love with him and is now a heartbroken woman who may have fallen over to the dark side to get revenge.

Without any actual proof of who the culprit is (hint: it's NOT the innocent and devoutly-religious Murni), Kohar gathers together a torch-carrying mob of villagers to go after her. They beat her and her mother, burn down their house and then toss Murni off a high cliff. Luckily for her, she's caught by mysterious hermit Gendon (Mochtar). He takes her into his home, tends to her wounds and nurses her back to health. After hearing her story, he then encourages her to seek revenge. Actually, he pretty much demands she take revenge. He saved her, he makes the rules and his rules are "Kill them all!" And, conveniently enough, he happens to be highly skilled in black magic himself and is willing to teach her all he knows. Murni is put through a ceremony that involves her doing a trampoline act in front of a full moon, meditating until her hair is (literally!) smoking and having blood ladled over her head. Now she's ready to enact her revenge.

After tying a string tied around a voodoo doll's penis, Kohar is unable to be intimate with his new wife. Murni then makes her presence known in her village, starting with blowing a swarm of bees in the direction of one of her attackers; killing him. Darmil (Dorman Borisman), who witnessed the death, runs off to inform Kohar, who initially doesn't believe him. It isn't until another of her attackers, whose veins and skin swell until he explodes into a bloody mess, is killed and there are even more witnesses, that Kohar gets his mob back together again. He beats and kicks Murni's mother yet again when she shows up pleading for her daughter, killing her this time, which further fuel's Murni's rage. A man is hung from a tree by a shawl and another sinks into a rice paddy and then emerges bloody and covered in snakes. For an encore, she makes a man rip off his own head and then the head is revived, flies around and attacks people!

Things take a less horrific turn upon the arrival of vacationer Permana Sidic (Teddy Purba) from the big city. A kind, religious man, Permana know the power of faith and prayer. Seeing how the village has abandoned religion and let their mosques turn to ruins due to neglect, he encourages them to fight off evil with spirituality. It seems to work. Coinciding with his arrival, Murni decides that she's through with killing and wants to move on elsewhere and restart her life. Gendon, however, has other ideas. Behaving like your prototypical abusive partner, he tries to chip away at her self-esteem and good nature by insisting she's now forever tainted having used black magic and can no longer live a normal life. He also points out that no man will want her now that she's not a virgin. Gendon demands she continue to kill villagers, though she refuses. Murni (now calling herself Zaruni) runs into Permana and the two start meeting by some waterfalls to fish. They quickly fall in love and plan to go to the city and marry but Gendon won't let her go so easily.

Though the horror takes a back seat to soap opera / melodramatic tragedy in the last 25 minutes, Queen is still good oddball entertainment. It's notably better-made than other Indonesian horror films I've seen from this decade, perhaps because the director had actually attended film school at one point and was already very experienced at this stage in his career,. Not only is it well-shot (the training sequence in front of the moon is especially striking), but the editing and special effects are also above average. Hell, they even manage to skillfully pull off jump cuts in this one! While the English dubbing is bad, the performances themselves, particularly the two leads, are not. In addition, there are plenty of varied, imaginative and gruesome death scenes. The gory makeups are quite impressive for the time, though probably seemed more outrageous when this was first released than they do now. A couple of plot twists (neither of which are all that difficult to figure out) are thrown out at the end, along with a nice full body explosion to cap things off. 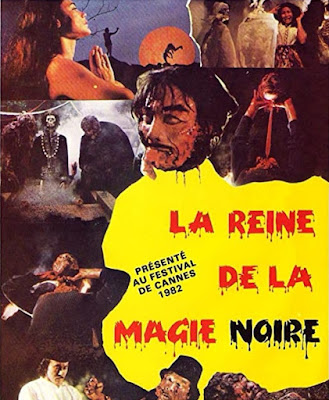 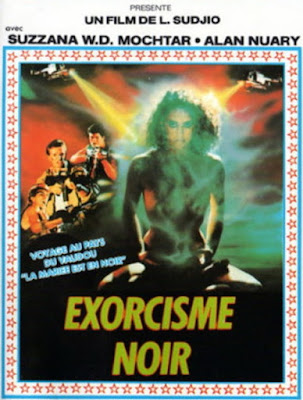 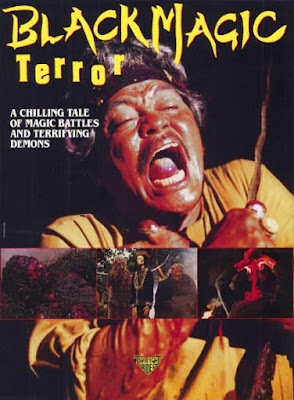 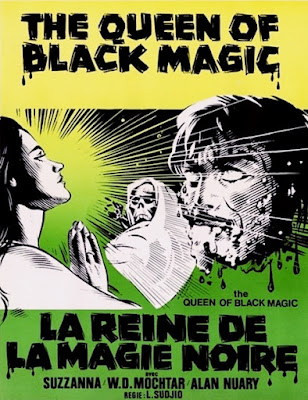 The cast also includes Doddy Sukma as the village chief / Kohar's father (who really isn't a bad guy despite his son being a complete prick), Mien Brodjo as his wife and H.I.M. Damsyik, who is seemingly in every other Indo horror film from the 80s, in a small role as a villager. Director Sudjio made many other genre films over the course of his career, including Ratu Ular / "Snake Queen" (1972), Darna Ajaib / "The Amazing Darna" (1980), Manusia Berilmu Gaib / "The Magic Man" (1981), Misteri Rumah Tua / "Mystery of the Old House (1987), Dendam di Jumat Kliwon / "Revenge on Kliwon Friday" (1987), Ngipri Monyet / "Monkey Worship" (1988), Siluman Teluk Gonggo / "Demon of Gonggo Gulf" (1988) and three-part Misteri Dari Gunung Merapi / "Mystery of Mount Merapi" series (1989-1990). To my knowledge, none of those was ever released in the U.S. nor are they available in English.


The French VHS release called Exorcisme noir uses images from Lady Terminator on the box. A remake of the same name directed by Kimo Stamboel (Macabre) and written by Joko Anwar (who also wrote the remakes of Satan's Slave and Gundala) was released in 2019.