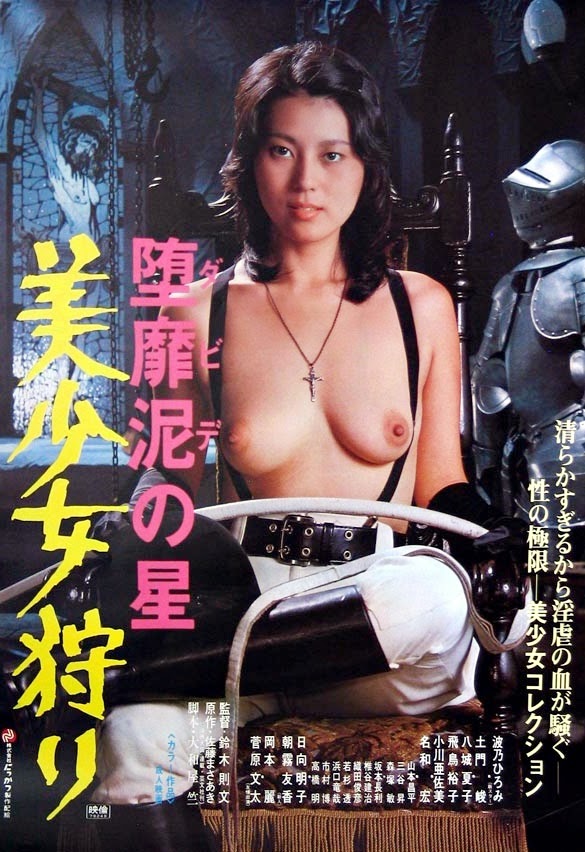 
After being involved in at least six rape / burglary crimes, escaped convict Genpei Hirukawa (Shôhei Yamamoto) decides to break into the home of affluent couple Yasuhisa (Hiroshi Nawa) and Tokie (Yûko Asuka) Jinnô for more of the same. He ties them both up, beats them, berates them, rapes Tokie (in both conscious and unconscious states and right in front of her hubby) and then raids their safe. Wrongly sensing his wife secretly enjoyed the "degradation," Yasuhisa decides to tie her up and whip her himself after the thug leaves. She gets him to stop by revealing that she's pregnant... but that doesn't last for too long. After she gives birth to their son Tatsuya, Yasuhisa continues to abuse both his wife and now their child; convinced the boy was conceived during the rape and isn't his. After years of cruelty and abuse (including being being forced to watch her husband and his mistress go at it), Tokie decides she can no longer take it and jams a samurai sword through her neck. The suicide is written off as a death from illness after Yasuhisa pays off some doctors to lie, leaving little Tatsuya in the hands of a monster. Thankfully, Yasuhisa loosens up a little bit on the kid in the ensuing years... but the damage has already clearly been done.

Yasuhisa dies an "accidental" death in a boating accident and leaves his son billions of yen to play with. Tatsuya (Shun Domon), now a 20 years old university student and thus able to collect on the inheritance, decides he's going to live his life just like the man he believes is his real father. He reads passages from Yasuhisa's diary, masturbates to books about Nazis, obsesses over "Histoire d'O," admires "the great men who created Auschwitz and dropped the A-bombs" and thinks those who destroy others are the most powerful people in this world. Tatsuya begins the fun and games by losing his virginity to his father's sleazy mistress Saeko (Rei Okamoto). He then chains her up by the wrists in his cellar and decides to kill her and then have sex with her corpse while his own birthday party is taking place right upstairs. Now with an airtight alibi, he dumps the body in a field and the investigating cops think Genpei (still on the loose after all these years) is responsible since it fits the exact same sex/violence m.o. as his crimes. As it turns out, a gray- haired Genpei *is* actually still at it, dragging jovial bicycling schoolgirls into the weeds to anally rape / strangle and such, which only adds to the confusion.

Next on Tatsuya's agenda is goody goody high school girl Kiyomi (Asami Ogawa), whose televised anti-war speech infuriates him. After kidnapping her and tying her up, he attempts to "draw out the immortality" in her by cutting her up with scissors, making her masturbate and straddle a sharp steel beam minus panties and watching her pee. Pretty soon she's enjoying all of this and picks up a special affinity for sexual asphyxiation. Now that his job is done, he unleashes her back into the world where she becomes a happier, better-adjusted, more popular and more beautiful (!?) woman than ever before. Tatsuya then sets his sights on famous pop singer Jun (Natsuko Yashiro), who's part of the shallow "counterfeit culture" he despises. Jun's personal assistant Machiko (Yuka Asagiri) is also part of the deal in the swipe and both of the ladies are dragged back to Tatsuya's dungeon for more of the same: beatings, whippings, humiliation, S&M sex, eating out of dog dishes on the floor while on all fours and, of course, death. 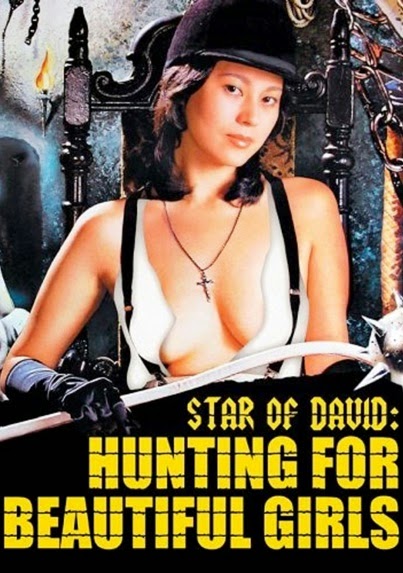 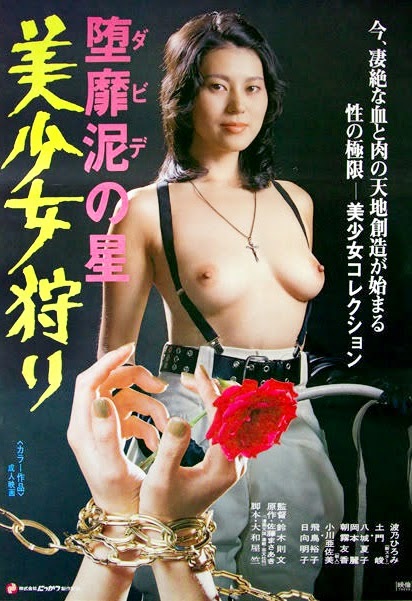 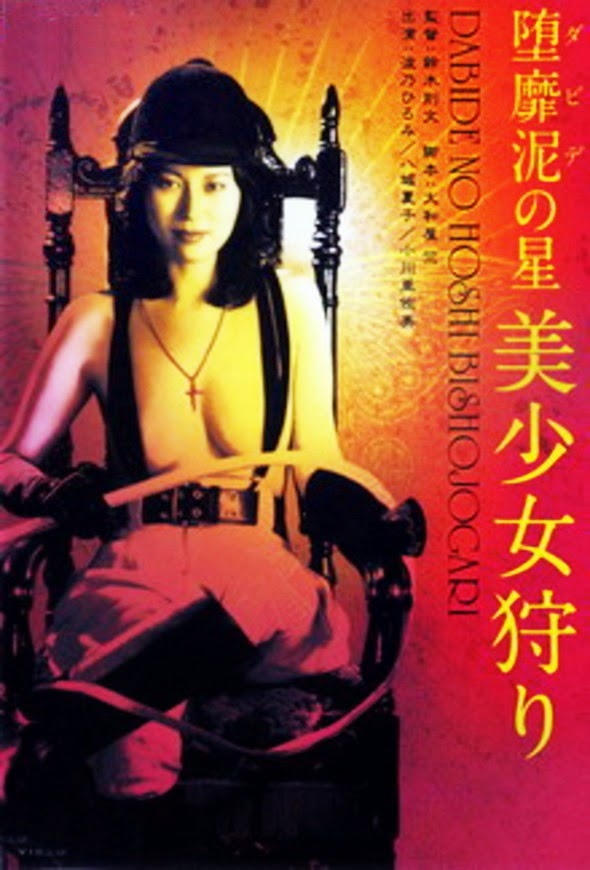 Genpei eventually shows up at Tatsuya's mansion for a touching family reunion that hits it peak when father and son force one of their captives to get her naughty parts licked by a German Shepherd before dad simultaneously rapes and strangles her to death while his boy looks on vacantly. Putting on a mild-mannered nice guy face for the world at large, Tatsuya has even managed to gain the affections of his oblivious childhood friend Yumiko (Hiromi Namino). Though she's always referred to Tatsuya as her "brother," Yumiko finds herself drawn to our disturbed young protagonist in a more romantic way. Her only issue is that's just too gentle for her, so she lets him know that if they do get married one day he's welcome to hit her if she doesn't obey (!?) But as Yumiko reveals some dark secrets about her own past, we discover that being like a "brother" to her may actually be a perk in her turn-on department. A match made in heaven? We shall see!

Torture, rape, kidnapping, murder, sadism, necrophilia, bestiality, suicide, child abuse, incest... what does it all mean? Well, factoring in the demented father-son duo and all of the Nazi / war references, I'm sure it has something to do with "inheritance of evil" being passed down from generation to generation. There are blatant "nature vs. nurture" asides throughout but at the end of the day does any of that really matter? No, not really. This was primarily made to cater to a wide array of sexual fetishes and play on the exploitation circuit in its homeland. It delivers perversity aplenty and some highly questionable / outrageous story points along the way that are going to appeal highly to fans of this kind of stuff. At the same time, it's all so gratuitous and over-the-top it's hard to actually be offended by any of this. The fact it's very well-made, very nicely photographed, reasonably well- acted and done in a rather artistic fashion are all added bonuses. This film perfectly captures the true value of these older exploitation movies. Just how many outrageously sleazy films do you see being produced nowadays that are 1. shot on film and 2. have production values good enough to compete with the major studios? I'm drawing a blank thinking of any myself.

The director was one of the top "pinku" directors of his day and has a handful of popular cult flicks under his belt including Girl Boss Guerrilla (1972), Sex and Fury (1973) and School of the Holy Beast (1974). Those, as well as this one, have all been issued on DVD here in America so they're relatively easy to find.