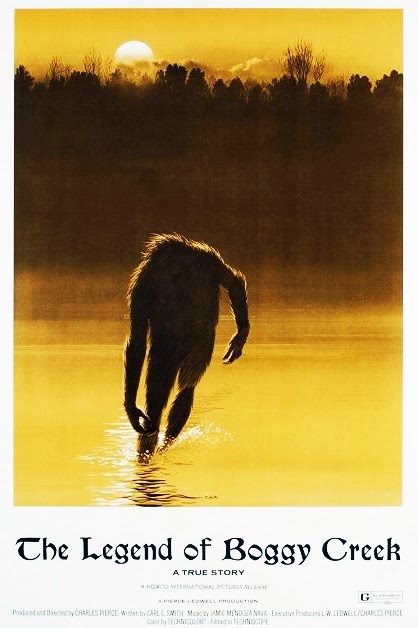 ... aka: Legend of Boggy Creek: A True Story, The
... aka: Tracking the Fouke Monster

Directed by:
Charles B. Pierce


Perhaps never quite given its full due, The Legend of Boggy Creek is notable for many different reasons. For starters, it was an early independently-produced success story the likes of which we seldom see, made in a land far, far away from Hollywood. Years before Halloween and the Elm Street films were smashing box office records for independent productions, Boggy Creek (which was made for a little over 150,000 dollars) was packing drive-ins and movie houses to astounding figures. As a matter of fact, the film managed to pull off the near-impossible by surpassing the 20 million dollar mark, which was enough to make it the 7th highest grossing film of its year. It also awakened a huge interest in Bigfoot and similar-style creatures, which resulted in too-numerous-to-mention low-budget films hoping to capitalize on the 70s craze. All that can be traced right back here. The presentation of the material is also genuinely clever and inventive. It's fashioned as a "true story" pseudo-documentary complete with narration, eyewitness interviews and reenactments of various encounters people have had with a hairy creature that is said to stalk the marshlands of Southwest Arkansas. Finally, this is better-made than it is ever really given credit for. It not only evokes rich local color, but the quiet autumnal nature photography manages to make still, overgrown fields and simple forests seem like eerie places. That's all enhanced by the disquieting, ominous use of natural sounds and various animal noises.

The setting is the small town of Fouke, population 350, which is located on the corner of the state right where Arkansas meets with Texas and Louisiana. The area is filled with farmers and ranchers, hunters and fishermen; all living is densely forested areas along the twisting and turning Boggy Creek. As our narrator (who had a childhood encounter with the monster) tells  us, "Fouke is a right pleasant place to live... until the sun goes down." And when the sun goes down, various citizens have spotted a hairy "Bog Man" lurking around in the woods that the newspaper quickly dubs "The Fouke Monster." It's said to have a coat of reddish-brown fur, makes loud wailing noises and may be responsible for killing animals in the area. Willie E. Smith and John P. Hixon both claim to have seen it on their property and taken shots at it, and two of John W. Oates' prized pigs were supposedly murdered by the beast, which managed to easily lift the 100+ pound animals up over a fence. As a counterpoint, teenage outdoorsman Travis Crabtree goes to visit old timer Herb Smith, who's lived in a shack in the Fouke woods for over 20 years but has never seen or heard the monster. He seems to be in the minority.

Many others will have encounters with the "Fouke Monster." Both James Crabtree (Buddy Crabtree) and his nephew Fred (Jeff Crabtree) spotted it while out hunting. It paid a visit to teenage student Mary Jane Searcy's (Judy Baltom) house late one night and scared her kitten to death. After a local boy shoots at it and a posse of men are organized to hunt it down, the beast retreats deep into the forest and isn't seen or heard from again for eight long years. Perhaps because of loneliness or curiosity, it again resurfaces in the area and more encounters follow. Lots of animals mysteriously turn up dead, a young couple out driving at night claim to have spotted it running across the road and a man finds the creature's distinctive three-toe footprints in a bean field on his land, prompting nationwide news coverage. The creature scares a young mother and her three kids shitless and ruins poor Nancy's trailer slumber party. The longest story of the bunch centers around two young couples; Don (John Wallis) and his wife Sue (Bunny Dees), and Charles (Dave O'Brien) and his wife Ann (Sarah Coble), each with a small child, renting a new home, and having several "hair-raising" nighttime encounters with the beast.

Not everyone is going to like this one, and that's perfectly understandable. I can especially imagine many young modern viewers, who are more accustomed to fast-moving action-horror flicks, being downright bored by this slow, leisurely, G-rated film. The cast is comprised of complete amateurs giving amateurish performances, the narration is sometimes extremely corny and there's a lot of basic nature photography, with lots of long, loving shots that linger on the scenery just long enough to show just how in love the director is with the area. Pierce shot the film on 35mm in Techniscope and Technicolor and the photography overall is actually quite nice. He also makes the wise decision to never really show the monster in its entirely. We only get to see its silhouette off in the distance, or close-ups of its arms and legs, which builds up a certain backwoods mystique for the elusive beast and invites the audience to try to picture just what the thing actually looks like. For me, this was more enjoyable as a slice of Deep South Americana as it is a monster-horror movie, though people who saw this during its initial run were apparently horrified by it. 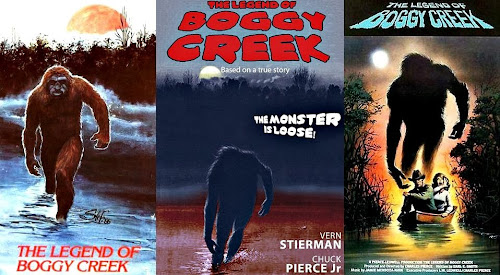 There are two songs on the soundtrack; a title track (sometimes referred to as "Lonely Cry" or "This is Where the Creature Goes") and "Nobody Sees the Flowers Bloom but Me" (sometimes called "Hey There Travis Crabtree") which are often mocked for their straight-forward and simple lyrics. However, both songs have a folksy, haunting quality to them that's a perfect reflection of the backwoods town this film is set in and the people who populate it. The music also greatly contributes to the atmosphere and authenticity of the film, which are two of its greatest strengths.

Boggy Creek's success led to a handful of offshoots. Return to Boggy Creek (1977), starring Dawn Wells of "Gilligan's Island" TV fame and the ill-fated Dana Plato of "Diff'rent Strokes" TV fame, was an unrelated kid's movie directed by Tom Moore. Pierce himself made the "official" sequel Boggy Creek II: And the Legend Continues (1985), which was later ridiculed on a popular episode of "Mystery Science Theatre 3000." Neither managed to match the success of the original, and neither did Pierce's other forays into the genre, such as The Town That Dreaded Sundown (1976), which was based on a real-life serial killer who terrorized Texarcana in 1946, and The Evictors (1979), a haunted house tale. A few independent producers have recently tried to cash-in with movies like Boggy Creek: The Legend is True (2010) and The Legacy of Boggy Creek (2011; which was originally called The Skunkape Story).