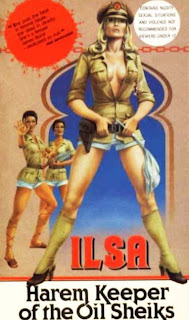 ...aka: Harem Keeper of the Oil Sheiks

Directed by:
Don Edmonds
While the original was seedy exploitation mostly played straight, this first sequel to the drive-in hit ILSA, SHE WOLF OF THE SS (1974) goes more for high camp while maintaining the overall nastiness of the first movie. And in many ways, it's actually a funner movie to watch. Working on the review.
★★1/2
Posted by The Bloody Pit of Horror at 2:22 AM No comments: 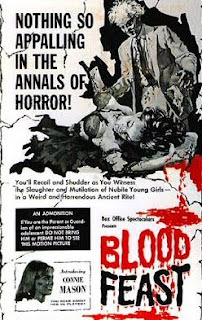 ...aka: Egyptian Blood Feast
...aka: Feast of Flesh

Have you ever had... an Egyptian Feast? Dum dum dum. Well actually, no I haven't! And I can't believe I'm just now getting around to watching what has been widely heralded as "the first gore film." That's a debatable label, since a number of pre-1963 movies put that into question, yet I can't think of any that actually went this far and were specifically made to gross people out. Despite the technical ineptitude constantly on display, this drive-in hit has certainly earned its place in the film history books as a premiere bad taste achievement in American cinema. Egyptian foods store owner Fuad Ramses (Mal Arnold), he of the frosted blue hair and huge arched drawn-in eyebrows, is doing more in his spare time than catering parties for brain dead Florida beach bunnies... He's actually killing and dismembering them. It's all because he's making a special body part stew that will help to resurrect an ancient Egyptian goddess. Or something. Throw in a cop ("Thomas Wood" aka William Kerwin) investigating the murders and an airhead college student (Connie Woods), both of whom are conveniently studying Egyptian history, and you basically have BLOOD FEAST.

The patented blood is bright red, the colors are blindingly gaudy and the acting and dialogue are both terrible. I'm not even sure how to rate this one. When put in context to when it was made, one would be foolish to completely dismiss it or deny its importance in the development of the modern horror film and yet it's not good by any stretch of the imagination.
★★ SBIG
Posted by The Bloody Pit of Horror at 12:43 AM 1 comment: