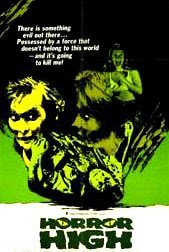 ...aka: Kiss the Teacher Goodbye
...aka: Twisted Brain

Directed by:
Larry N. Stouffer
Nerdy, shaggy-headed chemistry wiz Vernon Potts (Pat Cardi, from LET'S KILL UNCLE) is nearing a breakthrough on his experiments with guinea pig Mr. Mumps, but is otherwise having a tough go at the hell that is high school. His peers have nicknamed him “The Creeper,” push him around and rip up his notes. His bitchy old English teacher Miss Grindstaff (Joy Hash) gives him an F for accidentally turning in the wrong paper and then tries to force him to participate in the dreaded literature club. Coach McCall (John Niland) sneers, “You’re probably the worst physical specimen I’ve ever seen!” and then tries to coerce him into letting star athlete Roger (Mike McHenry) cheat off his exam papers. One evening while working late in the lab, creepy janitor Mr. Griggs (Jeff Alexander), still pissy over the death of his pet cat, forces Vernon to drink his own secret serum and before you know it, the poor picked-on geek starts immediately taking on Jekyll and Hyde tendencies. Since no high school science lab is complete without an open barrel of sulfuric acid (!!!) sitting off in the corner, he gives Mr. Griggs a quick dunk in the gunk. The next day, his memories of the murder are a bit hazy, but the problems continue. Distraught by the lack of support he receives at home (his mom is dead and his dad is always out-of-town on business and tells his new girlfriend, “His mother turned him into a damn sissy!”), Vern decides to willingly ingest the formula to get back at the others who have made his life miserable, which involves chopping off a head and fingers with a paper cutter and doing a cha-cha dance on top of a victim wearing spiked golf shoes. Not even the love of pretty and compassionate Robin (Rosie Holotik, Playboy model and star of DON’T LOOK IN THE BASEMENT) can stop the cycle of revenge. Austin Stoker is the detective investigating the murders and “Mean” Joe Greene pops up briefly as a cop.

In his ‘monster’ form, Vernon looks a little hairier than usual and walks like Ratso Rizzo in MIDNIGHT COWBOY, but the minimal make-up is never really shown and too dark to see. Actually, the whole damn movie is way too dark and grainy, some of the supporting performances are amateurish in the extreme and the music is oddly inappropriate, right down to the syrupy ballad “Vernon’s Theme!” However, the film gets a little (just a little) credit for preceding CARRIE (1976) in the outcast-strikes-back horror teen subgenre. The later RETURN TO HORROR HIGH is not a sequel.
★1/2
Posted by The Bloody Pit of Horror at 4:04 AM