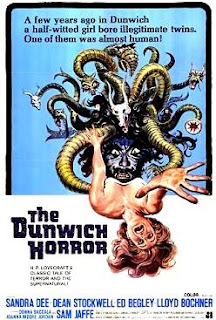 Directed by:
Daniel Haller
Sandra Dee (the original teen queen GIDGET to all you beach bunny fans) is Nancy Baxter, a virginal blonde student at Miskatonic University who meets Wilbur (Dean Stockwell), the well-to-do grandson of a warlock who was lynched years earlier. Wilbur shows interest in the Necronomicon and in Nancy, because he needs both the book and the virgin to open a gateway for demons called "The Old Ones" to enter our world. He invites Nancy back to his secluded home in Dunwich, where he keeps her drugged, plots to sacrifice her on a seaside altar and fights with his senile, ranting grandfather (Sam Jaffe). A strange-looking, barely-seen, multi-headed flying monster who sees in negative (and looks kind of like GHIDRAH, THE THREE HEADED MONSTER), is kept locked in the attic, but escapes for the silly finale. Dee fans might be startled to see her in an "adult" role; saying sex is "great" and simulating orgasm while being groped on an altar, but she delivers a fine performance as well. Ditto Ed Begley in his last role as a heroic professor. Stockwell is so soft-spoken and weird it's hard to gouge just how good (or bad) his really is. There are supporting roles played by Lloyd Bochner (a doctor) and Talie Shire (a nurse), as well Joanna Moore Jordan as Lavinia, as well as former Roger Corman (the producer of this movie) movie regulars Barboura Morris and Beach Dickerson, playing a married couple here.

Compared to most recent H.P. Lovecraft adaptations, this isn't half bad and it all looks very cool and colorful. Samuel Z. Arkoff and James H. Nicholson were the executive producers. Director Haller also made DIE, MONSTER, DIE! (based on Lovecraft's "The Colour Out of Space"), which was made in 1965.
★★1/2
Posted by The Bloody Pit of Horror at 8:52 PM

I admit I'm one of the many Americans who are constantly looking for new new new... And yet still tend to enjoy the B movies just as much, never giving any thought to the movie's that laid down the ground work and paved the way for the horror movies we see today. It's the originals that pushed the envelope and were able to instill fear and wonder without the major effects and props you see today. So with that said it is nice to expand my movies viewing horizons, and I'm glad this site is here because it's BS free and descriptive and to the point, so thank you Justin for keeping the classics from being forgotten!

Now as far as this movie goes I feel the acting from the Dean Stockwell and Ed Begley was actually outshined by Sandra Dee.... And not due to her outstanding acting.... She was far from what I would consider bad.... But the end showdown between the guy's seemed forced and not committed to their rolls... I'm no expert and my opinion is just that : )