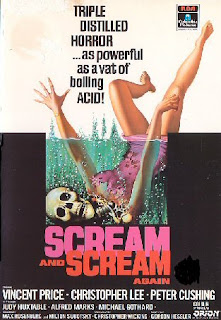 A jogger has a heart attack and wakes up in a mysterious hospital missing a leg; each successive day he's missing another leg, an arm, etc. A shaggy-headed hippie drinks the blood of potential one-night-stands. Another young lady is found raped, strangled, mutilated and completely drained off blood, with a slit throat and "vaginal contusions." A savage underground militia (complete with a Nazi-like red armband sporting three upward arrows) gun people down in broad daylight, kidnap women and pinch off their fingers with scissors. Young Brit swingers dance the night away at a psychedelic disco in their hilarious late 60s fashions while a stoned-out band (The Amen Corner) perform a few throw-away rock songs. And, of course, all the loose ends are explained by having a slew of mad doctors, military men and politicians plotting to create a race of emotionless super-strong, hard-to- damage synthetic supermen (and in one case, superwoman) who they are slowly integrating into levels of high societal authority.
.
Despite the exciting star billing of Vincent Price, Christopher Lee and Peter Cushing, you should be aware that the real stars of this one are Alfred Marks as the mustached police superintendent on the case, Christopher Matthews as a blonde doctor and Anthony Newlands as an evil general who can perform a Spock-like death pinch on victims. Michael Gothard also has a small, but memorable, part. Price is Dr. Browning, who becomes a suspect when investigators link a victim back to him. He claims to be doing cancer research with germ cultures, but is actually the one using organ/limb/brain transplants to create the near-unstoppable creatures in his futuristic lab. Lee is Agent Fremont, who aids police in cracking the case but also may be involved in a half-assed assassination subplot. The two share one scene at the very end. Cushing (who shares no scenes with either Lee or Price) has the most disappointing role as Major Benedek; one of the masterminds behind the plot. He's killed off very early in the film. Also in the cast are Judy Huxtable, Yutte Stensgaard (the Danish star of Hammer's LUST FOR A VAMPIRE), Judy Bloom, Peter Sallis, Uta Levka and David Lodge.
.
SCREAM also features a long car chase, a pit of acid, a ghoul ripping off his own hand to escape police handcuffs, lots of cigarette smoking, some topless nudity on the slab and a bald/naked female robot who is savvy enough to cover her private parts with her hands. The acting is fine and a few scenes deliver the goods, but the jazzy music score is distracting and this fragmented movie seems shattered in about a dozen pieces, making it often difficult to follow. Still, it's good groovy British fun, anyway!

When released to theaters, it was co-billed with the early Lovecraft adaptation THE DUNWICH HORROR. The MGM DVD pairs it with THE OBLONG BOX, which also featured Lee, Price and Levka (the guys in larger roles than here) and was directed by Hessler. The trailer however has the wrong actor announced as Peter Cushing!