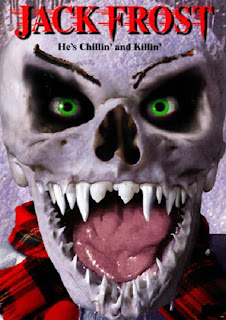 
He'd stick knives in their faces and cut out their tummies, and stamp on their heads till their brains got all runny. Jack was nimble, Jack was quick, Jack gouged out eyes with candlesticks. He smashed in skulls with sticks and stones, used iron bars to crush their bones so he could hide his kills in tiny places and he wouldn't have to see their faces...

After a five-year-long reign of terror that included hiding the body parts of his victims in pecan pies, serial killer Jack Frost (Sam MacDonald) has finally been apprehended. On a cold and snowy winter night, Jack's being escorted to death row when his transport van collides with a chemical truck and some kind of top-secret body altering chemical is unleashed. It splashes into Jack's face, melts his body, somehow blends his DNA in with the snow and the end result is a talking snowman with psychopathic tendencies and a never-ending series of lousy one-liners. Well, at least "It ain't fuckin' Frosty!" Jack now wants revenge against nice guy smalltown Sheriff Sam Tiler (Christopher Allport), the man responsible for his arrest and heads on over to the secluded small town Snomonton to start killing off the populace. 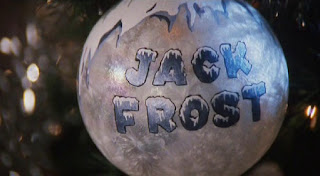 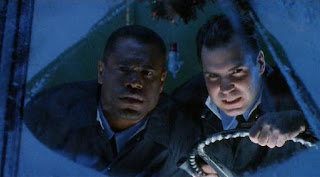 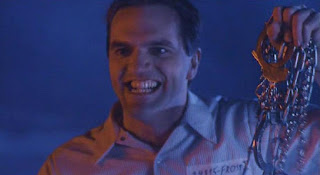 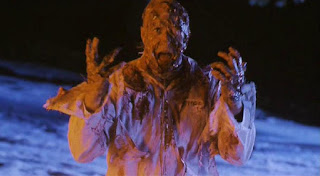 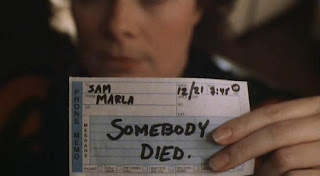 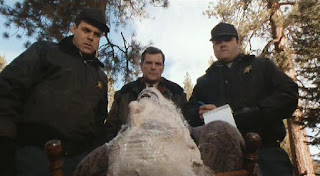 Sheriff Sam's been haunted by nightmares ever since he arrested Jack and things are about to get even worse, starting with the mysterious death of an old man who's had his neck snapped by something powerful yet cushy and soft. Then the snowman materializes in Sam's front yard long enough to push a bully down in front of a sled and decapitate him. The death is initially blamed on the Sheriff's son (Zack Eginton), but that soon changes when more people are killed. A man has an axe handle shoved down his throat and his wife is strangled with lights, has her face cut up with busted ornaments and then has a star jammed through the top of her head. A deputy gets run over. Shannon Elizabeth gets a start on her long and illustrious career by getting raped to death in the bathtub by the snowman. Because of all the deaths, a curfew has been put in order and all the townspeople congregate at the local church. But knowing there's a psycho on the loose doesn't stop Sam's wife Anne (Eileen Seeley) from going back to her home all by herself just to get some blankets! 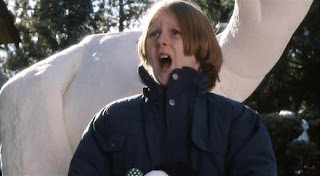 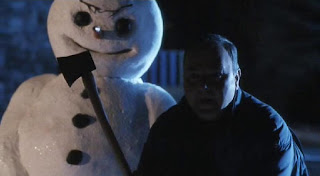 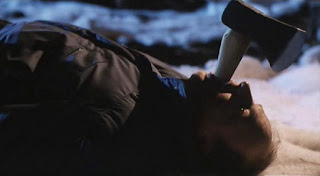 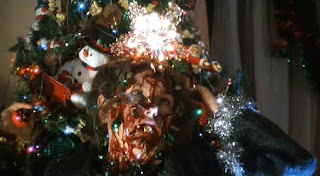 FBI Agent Manners (Stephen Mendel), who has a field day trying to belittle the Sheriff, and scientist Dr. Stone (Rob La Belle), show up in town to explain to the Sheriff that he's up against the "world's most pissed-off snowcone." Jack has the ability to quickly melt and re-freeze to sneak under doorways and through faucets, shoots sharp icicles out of his mitten, er, hand and constantly spouts off at the mouth. Hey, "I only axed ya for a smoke!" Our heroes must devise a way to stop the "world's most pissed-off snowcone," which include using hair dryers, blowing him up, luring him into a furnace and, finally, taking him for a dive into a truck bed full of antifreeze. p.s. If little Zack wants you eat his "special;" don't, if you value your life. 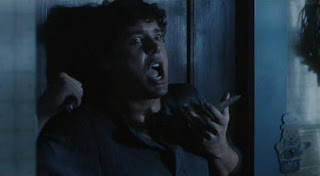 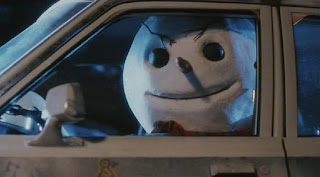 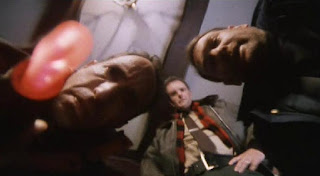 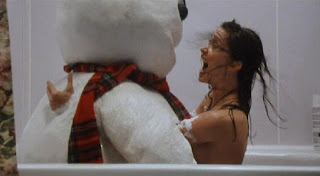 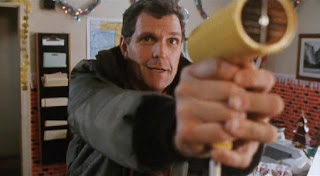 Jack Frost defies the obvious criticisms. This is an incredibly stupid movie that knows good and well that it's an incredibly stupid movie and refuses to ever take itself seriously. In short, this was made simply to be goofy, campy and fun. Whether you find it any of the above is going to depend entirely on what kind of person you are. I did chuckle a few times watching this, for sure, but spending an hour and a half watching someone making fun of their own intentionally stupid concept isn't going to be everyone's cup of cocoa, and that's completely understandable. Either way, this is a good-looking, nicely-shot and fast-paced movie with plenty of mayhem and brainless action. 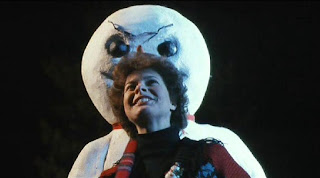 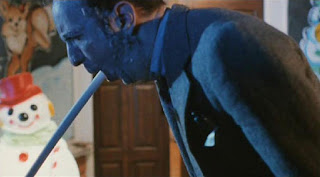 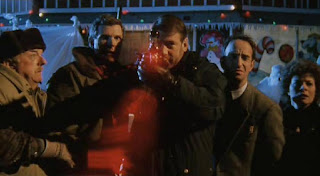 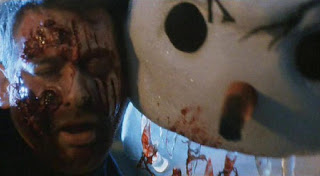 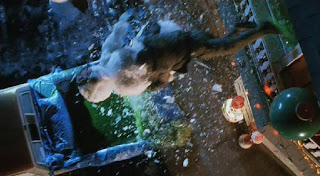 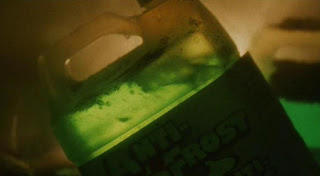 JACK FROST 2: REVENGE OF THE GIANT MUTANT SNOWMAN (1999) - coming soon to a blog near you! - brought back cast members Allport, Seeley, Marsha Clark (who plays a smart-ass police dispatcher) and Chip Heller (a deputy). It was also made by writer / director Cooney and again featured the voice of MacDonald as the title character. There was also a family movie out in between these two called Jack Frost (1998), which starred Michael Keaton as a guy who dies and returns as a snowman. 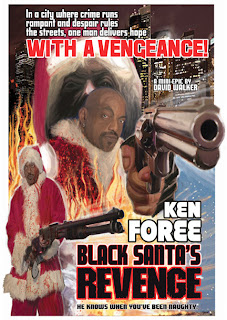 
Veteran horror star Ken Foree, from such classics as George A. Romero's DAWN OF THE DEAD (1978), Stuart Gordon's FROM BEYOND (1986) and Michael Fischa's DEATH SPA (1987)... well, ok, scratch that last one... stars in this 20-minute horror-comedy short, which he also co-produced. Needing some good karma because of his checkered criminal past, an unnamed man (Foree) donates his time playing Santa at a local community center to help raise money for charity. Four armed thugs show up, knock him out and then steal all of the toys that shelter has purchased for poor kids. A skeptical police detective doesn't believe his story and implies he was somehow involved, but has a chance of tune once the same thugs rob the Salvation Army. Worried the kids are going to think he's a (insert DOLEMITE nod here) "rat soup-eatin' motherfucka" and their "merry mother fuckin' Christmas" is gonna "suck ass," Black Santa decides to go drown his sorrows at the local strip club. There, he spots one of the thugs and decides to follow him back to his gang's headquarters armed with a shotgun.

Black Santa shoots several guys (even blowing a hole through one), rips off an ear and pokes out eyeballs with his fingers, then finds out one of his co-workers is the mastermind behind the robbery. There's also a (terrible) CGI head explosion, some brief T&A and Ken gets to spout some one-liners ("Makin' my list, checkin' it twice, gonna put all your mother fuckers on ice!") while doing all of this. When I acquired a copy of this (which is based on an underground comic book of the same name by the director), I figured it would have to be fun. Surprisingly enough, it's not. It's actually kind of depressing, not particularly funny or clever, just too damn obvious in its pseudo-hip wanna be blaxploitation retro vibe and just another example of something trying to glide along on concept, without any talent behind the actual execution. I am, however, thankful for the short running time.