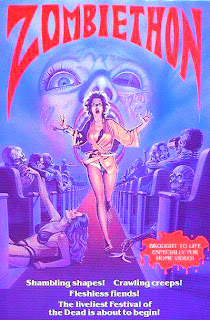 
Charles Band's Wizard Video was known primarily for two things in the 1980s: gore films and the great, eye-catching artwork on their usually large-sized VHS boxes. The company imported many foreign horror films to America. These were of varying degrees of quality, but Wizard was the only company releasing some of these titles during their day. They also had plenty of cheap American movies in their catalogue, some of which Band financially backed in exchange for the distribution rights to. Wizard also came up with the clever idea to make their own trailer compilations. Band would have someone shoot minimal new footage cheaply (usually on video) to bookmark all of the recycled clips and - wholla! - there would be a brand new movie to sell to stores. Not only were these compilations an extra way to make money, but they also acted as feature length-advertisements for the company since all of the clips contained within were films only Wizard were distributing. If something in any of these caught your eyes, you'd have to naturally buy or rent the Wizard release of the film. It's no wonder Band had thrived in the business for as long as he has with companies such as Empire Pictures, Full Moon and numerous subdivision (Shadow Entertainment, Surrender Cinema, etc.). He's simply a very good businessman. 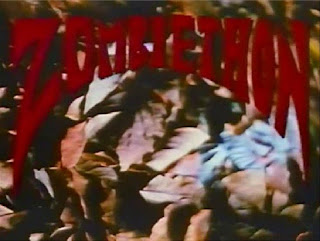 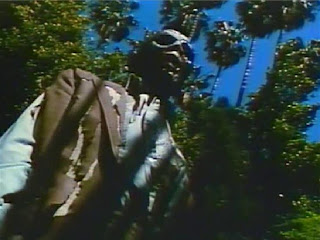 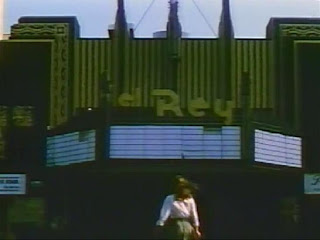 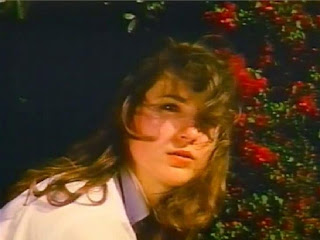 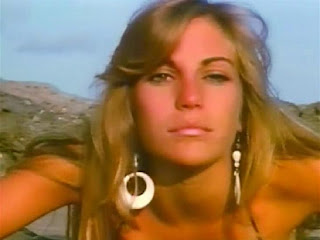 Zombiethon shares company with previous Wizard compilation releases THE BEST OF SEX AND VIOLENCE (1981), hosted by John, Keith and David Carradine and FILMGORE (1983), hosted by Elvira, as well as rival company Continental Video's TERROR ON TAPE (1985), hosted by Cameron Mitchell with a little help from Michelle Bauer. The good news is that the framing footage shot by Ken Dixon is a whole lot of fun. The extra good news is that almost all of the trailers stick to the zombie theme and the director has chosen the best parts from most of the films. Things begin with a rotten zombie rising from beneath a pile of dead leaves and then chasing a schoolgirl (K. Janyll Caudle) through some gardens into the El Rey theater. The girl takes a seat in the darkened theater little realized the whole place is packed with zombies. We get to see gory clips from Lucio Fulci's ZOMBIE (1979). Included are the boat scene, the underwater zombie vs. shark scene and the famous eye-gouging scenes, amongst others. Next up, some kind of cyborg hanging out at Bronson Caves scares up another theater patron; this time a hot bikini-clad blonde (Tracy Burton) who makes it just in time to check out clips from the God awful Jean Rollin bomb ZOMBIE LAKE (1981). 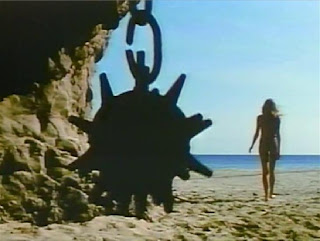 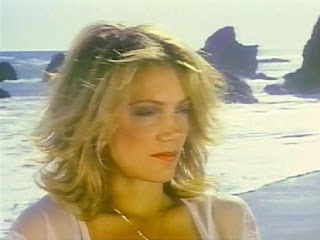 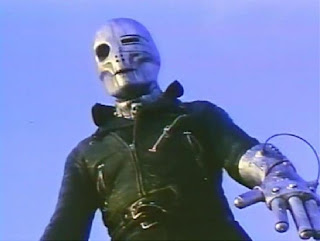 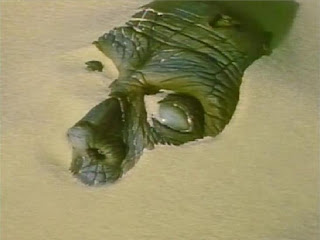 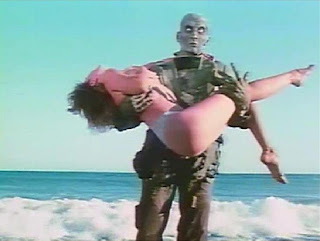 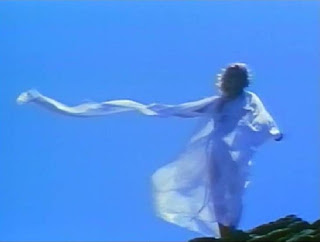 A third woman (Paula Singleton) in a sheer gown narrates her dreamy segment ("When the Gods are restless, the dead will walk again!"). She walks through a field of flowers onto the beach and then onto some rocks. Voodoo is used to summon up a zombie buried under the sands on the beach. After the woman strips off her gown, the zombie picks her up, she says "I want more out of life. Let's go watch a movie." and then the zombie carries her over to the theater to watch clips from the Jess Franco stinker OASIS OF THE ZOMBIES (1981), which may qualify as a fate worse than being ripped apart by flesh-eaters. After she's (presumably) killed, a mother (Janelle Lewis) and her very young daughter (Janessa Lester) walk around with a zombie stalking behind them. As the zombie approaches, we cut away for clips from Riccardo Freda's non-zombie Fear aka MURDER OBSESSION (1981). Back at the theater, a zombie messes up the projector and accidentally cuts off his finger while trying to repair the reel. He gets it fixed in time to show off the very trashy-looking French film THE INVISIBLE DEAD (1971). The mother and daughter pop into the theater. Seeing how the little girl - who proceeds to annoy the zombie sitting next to her by beating it with a balloon and blowing a party horn right in its face - looks to be around five years old, something titled A VIRGIN AMONG THE LIVING DEAD (1971) probably wouldn't be most parents' first choice for a kiddie show matinee. Clips from Ted V. Mikels' THE ASTRO-ZOMBIES (1967), with John Carradine and Tura Satana, lead us out. 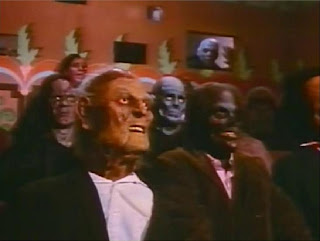 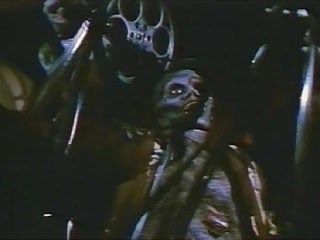 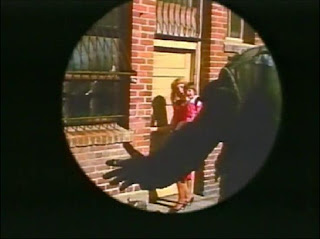 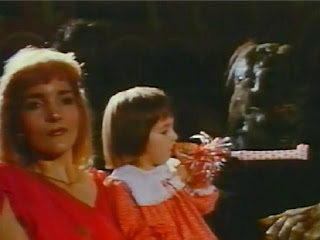 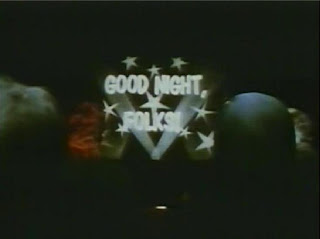 Some of the gags, such as a zombie ripping off another zombie's head so he can see the screen, are pretty funny, and the featured clips highlight the exploitative elements of each film and include plenty of blood, gore and female nudity. Seeing how vivid, creative, stylish and amusing Dixon's new footage is makes me think it's a true shame he didn't get to direct a B-grade zombie flick of his very own. He did however graduate from these Wizard compilations (he also directed The Best of Sex and Violence and Filmgore) to feature films with the Band-produced SLAVE GIRLS FROM BEYOND INFINITY (1987); a reasonably fun little sci-fi / horror / adventure cheapie influenced by THE MOST DANGEROUS GAME (1932). The zombie makeup was by John Reader with additional masks provided by David Lady (who also appears as one of the zombies).