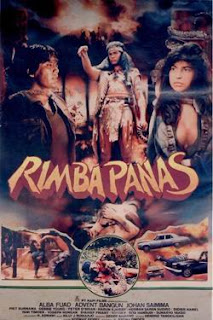 
Not to be confused with at least three other films with the same name from the 80s; the 1983 one involving a tribe of reptile-men and originally filmed as DANCE OF THE DWARFS, the 1985 Hong Kong production about POW prison camp atrocities or the barely-seen 1988 Cynthia Rothrock vehicle. This one's a Filipino/Indonesian co-production that falls into both the cannibal-shocker horror and lighter jungle adventure subgenres. As of this writing, it's not listed on IMDb and has never been released in America, though an English-dubbed copy surfaced on video in Greece which seems to be the source print for the bootlegs out there for sale. Despite being sourced from VHS, the print quality isn't too bad and the film (regardless of some horrendous and highly annoying dubbed dialogue) is fairly well made, kind of fun and surprisingly gory at times.

A couple of guys in the jungle fight over some precious stones and end up shooting and killing each other. Back at their base camp, a native tribe attacks and kill everyone there with spears and arrows and take a baby girl named Jessica back to their village. Many years later, a tough cookie named Lola (Alba Fuad) gets her hands on a diary and map detailing where a valuable treasure is hidden. While she gets together a team of people for a jungle expedition to be headed by Peter (Peter O'Brian) and his buddy John (Johan Saimima), some thugs overhear her talking about it, kidnap her and take her deep into the jungle. Once there, Lola manages to escape, while a cannibal tribe get their hands on her abductors. One guy is cut up and fed to a tiger. Another is decapitated and eaten raw. The ringleader - Nick (Didier Hamel) - manages to save himself by demonstrating a gun to them.

Meanwhile, Lola lucks out that Peter and John have both come to the area looking for her. The two men locate her and they resume their treasure hunting as planned, but wreck their canoe over some rapids and end up in the hands of a tribe. Lucky for them they don't end up with the cannibal tribe, but instead with a mostly peaceful tribe that includes a now-grown, blonde and statuesque Jessica (Debbie Young), who spends much of her time running through misty fields in a thong and taking slow-motion swims while pan flute music plays. Peter takes an instant liking to Jessica (now named "Mazizi"), but a tribal warrior (who already has four other wives) also wants her, so the guys must fight mano y mano for the honor of the jungle babe. Eventually, a bunch of jewels are located in a cave and brutish Nick shows up with the rival cannibal tribe to fight for them.

Similar in some ways to Jess Franco's dreadful WHITE CANNIBAL QUEEN (1980), but a bit more fun and enjoyable than that one. (How could it not be?) The presentation of the natives and their village are more convincing (no pudgy caucasians in sight!), the locations are better and there's bloody, brainless action going on much of the time to distract you from how stupid the whole thing is. I knew nothing about New Zealand-born lead actor O'Brian going into this one but apparently he has a small cult following for playing "Rambu" in the 1986 Indonesian action flick THE INTRUDER. The man playing Albert (Jessica's father) in the opening sequence is none other than Charles Kaufman, the brother of Troma founder Lloyd Kaufman and director of the semi-famous bad taste shocker MOTHER'S DAY (1980). He was over in Indonesia making JAKARTA (1988) when he took this small supporting role. Advent Bangun (a star of THE DEVIL'S SWORD, from the same director) and Piet Burnama (JUNGLE VIRGIN FORCE) co-star. PETA warning: Some real animals (namely boars) are actually killed in the film.
★★
Posted by The Bloody Pit of Horror at 10:57 PM No comments: 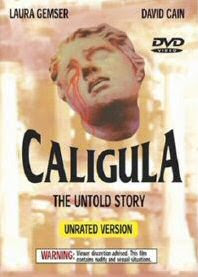 ...aka: Caligula: The Untold Story
...aka: Caligula II
...aka: Caligula 2: The Untold Story
...aka: Emperor Caligula
...aka: Emperor Caligula: The Untold Story
...aka: Garden of Taboo, The
Directed by:
Joe D'Amato
The violent, sexually graphic and big budgeted historical epic CALIGULA (which was produced by Bob Guccione of Penthouse Magazine fame) was neither a critical success nor a box office hit upon release, but it made so many international headlines throughout production that the low-budget, mostly European copies began right away. Many of these actually managed to beat their controversial cousin (which began filming in 1976, but didn't get released until three years later) to theater screens. This one, from well-known Italian sleaze director D'Amato (using the alias "David Hills" here) isn't one of the earlier ones but is likely the closest actual copy out there. Like the Guccione film, it's tasteless, overlong, gory, loaded with sex (some soft, some hard) and sexual perversity and was released in many altered versions for different international markets, including an R-rated cut missing over 20 minutes that was first unleashed to video here in America. Unlike the Guccione film, it's low-budget; completely lacking the grandiose sets, elaborate costumes and a "respectable" star-studded cast, yet it still manages that cheaply efficient shock the director is best known for.
David Brandon (as "David Cain") has the title role, as the insane, sadistic and sanctimonious Roman emperor who spends his time cooking up ways to humiliate and mutilate innocent people. After foiling would-be assassin Domitius (Michele Soavi), having him crippled and his tongue cut out, he and his lover Messala ("Oliver Finch"/ Luciano Bartoli) rape and kill virginal Livia (Fabiola Toledo). Though they blame the murder on others, Livia's confidant Miriam (Laura Gemser) knows what really happened and vows revenge. She has her opportunity when Caligula puts together a brothel full of beautiful women (mostly religious women dragged in against their will) to service wealthy senators he wants to help finance a pet project. Miriam, no stranger to sapphic love but still technically a virgin, deflowers herself with a dildo before God to prepare herself for the things she'll have to do in order to get closer to the emperor. But right as she's in a good position to strike out, she ends up falling for him.
What you'll see here, technically speaking, is generally unimpressive. The director also shot the film; opting for darkly lit interiors and soft-focus exteriors. Carlo Maria Cordio does provide an eerie score and there are appropriate costumes, but ancient Rome isn't meticulously brought to life via architecture and art direction. In fact, much of the action is filmed outdoors (in the woods, a beach, a cave...) to deliberately avoid all that. Though there's plenty of full nudity and soft-core sex, the hardcore is relegated to just two scenes; where the ladies have to practice their craft on a Greek soldier and during the brothel scene that follows, all of which use extras (likely Euro porn stars). Said brothel scene goes one step further than CALIGULA ever did, though, by having a graphic scene featuring a lady and a horse. We also get Caligula killing a newborn infant by flinging it against a wall and a memorably disgusting bit where men are killed by having metal poles shoved up their asses.
The cast includes Charles Borromel (MONSTER HUNTER), Gabriele Tinti (Gemser's husband) and Mark Shannon (EROTIC NIGHTS OF THE LIVING DEAD). The director, who also co-scripted with "Larry Franks" (George Eastman), was a big presence in 70s and 80s Euro exploitation world until he switched his attention to hardcore in the 90s. In that arena, he revisited the Roman themes again with CALIGULA: THE DEVIANT EMPEROR (1997) and other titles. The full uncut version of the film runs 125 minutes, though the UK release is just 86 and the R-rated U.S. version is 92.
★★
Posted by The Bloody Pit of Horror at 1:43 PM 3 comments:

Directed by:
Allen Plone
A late offering in the first American slasher cycle, this production from Wichita, Kansas is extremely dumb but decently-shot, packed with tacky 80s entertainment value and has that low-budget regional charm I just so happen to love (see OFFERINGS for more of the same). A pair of sadistic criminals kill two cops, shoot up a diner, escape into the woods and end up finding a large country home to hide out in. Meanwhile, musclebound football hero David (Joe Manno) has just won another game for his team and received word that he's snagged a full-paid college scholarship. The bad part is that it's a free ride to a college he doesn't want to attend and his wealthy parents just don't understand. The good news - well, good if you like chubby, shallow chicks with butch perms - is that all the popular cheerleaders now want in his pants. David already has a girlfriend, though; quiet redhead Joni (Megan Wyss), who's new to town and doesn't fit in with the popular people. David decides to throw a party anyway since his parents will be gone for the weekend. His folks remind him to take his medication before they leave because if he doesn't have it he'll become "violent." Perhaps he should just lay off the steroids instead?
.
So David, Joni, David's best pal D.B. (Ron Thomas), his girl Lisa (Janette Allyson Caldwell), three other couples and comic relief fat guy Russell (Randy Lundsford) - who doesn't have a girlfriend cause, you know, he's fat - all congregate at David's home to party the night away. It's naturally the same home where the escaped cons from the opening sequence ended up. As they hide out in the wine cellar, the teens branch off to do their thing. Their "thing" usually involves two of them wandering off somewhere to have sex (bedroom, hot tub, sauna), one of them leaving to do something really quickly, their significant other getting killed while they're gone and then them returning to get killed themselves. The chief suspects are obviously the murderous criminals in the basement, but then again, we have David acting a little odd because he didn't get his prescription filled and Joni acting a little odd when someone cracks a shock therapy joke, so you never know.
.
At the very least, the filmmakers attempt to make each murder scene a little different, so this has variety going for it. We get a face burned on an indoor grill, an axe to the head, poison gas let loose in a sauna, an electrocution in the hot tub, a strangling, shootings, a fire poker impalement and more. The film also delivers on the nudity, though it does so in the cheapest, strangest way possible. Apparently none of the ladies on hand wanted to do it, so they just swapped it all from other films and show it playing on TV sets throughout the film. The first source is from the 1981 slasher GRADUATION DAY, where we get to see a girl-changing-clothes and fencing-sword-through-the-throat murder, as well as Linnea Quigley running around topless and getting killed. The second source is from some porno film starring Seka, John Holmes and Honey Wilder, which one of the characters is watching. Both sources are sometime full screen and cut into the movie at odd times. Horror vet Herbert L. Strock (I WAS A TEENAGE WEREWOLF, THE CRAWLING HAND) was the editor!
.
My absolute favorite part is a lengthy sequence featuring "the nationally-famous" Sweetheart Dancers; a bunch of frizzy haired chicks in sequin tops who do a horrible choreographed dance while some hair band plays in the background. Yes, I live for such crap.
★★
Posted by The Bloody Pit of Horror at 4:01 AM 1 comment: