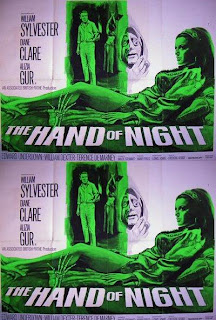 Directed by:
Frederic Goode
British architect Paul Carver (played by American William Sylvester) is haunted by the passing of his wife and children in a tragic car accident that occured two months earlier. Desperate to escape, he decides to flee to Morocco for an extended stay. On the plane there, he suffers from a strange nightmare/premonition blending the past, present and maybe even the future and meets French archeologist Otto Gunther (Edward Underdown), who's there to explore an old tomb and offers Paul the opportunity to visit the excevation site. Paul decides to drown his sorrows in a bar instead, meeting a strange drifter named Omar (Terence de Marney), who brings him to a lavish palace to watch some belly dancers. There, Paul meets beautiful young Marisa (former Miss Israel Aliza Gur) and the two instantly seem to fall in love. He passes out, awakens to find himself lying in the middle of the desert and discovers the palace he visited the night before is abandoned and in ruins. Visiting the archeological dig, Paul is introduced to Otto's assistant Chantal (Diane Clare), who can relate to the loss of a loved one, also quickly falls for our troubled hero and is concerned about his mental well-being since he's visiting places and seeing people that don't seem to exist.
A British production originally filmed as THE HAND OF NIGHT and released to U.S. theaters and TV under the misleading Beast moniker, this is a very difficult-to-find film that's not on DVD, and may not have even received a VHS release (at least here in the States). As with many other very obscure genre films, I've seen this one receive some wholly-undeserved, mystique-building praise from a couple of fanboys apt to spooge themselves over anything rare simply to make others who can't find it jealous. Sadly, this bland film really isn't worthy of much adoration at all. Though watchable, it's also dull, predictable and stiffly acted by the lead. Obvious parallels keep being drawn between "the light" (aka a healthy relationship with a caring woman), and "the dark" (aka a destructive relationship with a dark, sensual and mysterious woman). The latter happens to be an ancient princess who was buried alive centuries earlier and has returned as a fangless "vampire" (essentially just a spirit).
On the plus side, there are great opening credits featuring a smoking skull and a skeleton hand impaling a bat (which apparently are only used in the American version), nice-looking Moroccon locations, a competent supporting cast (the standouts being Underdown and de Marney) and a cool scene where ghostly henchman Otto withers away to a skeleton in the sun.
★★
Posted by The Bloody Pit of Horror at 11:24 PM No comments: 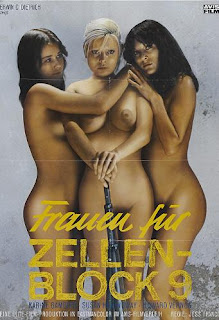