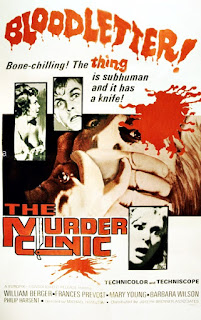 
Set in late 19th Century England, this is an underwhelming, average but fairly well shot (in Technicolor and Techniscope) Gothic horror / mystery yarn set in an off-the-beaten-path nuthouse. Compassionate nurse Mary Stuart (Barbara Wilson) arrives at the secluded Morley Sanitarium. She'll be starting work there in the morning and only has time to meet the humorless main nurse Sheena (Harriet “White” / Medin) and one of the patients, the mute Janey (“Ann Sherman” / Anna Maria Polani), before heading off to bed. Later that night, someone wearing a black hooded robe and armed with a straight razor surprises Janey in her bedroom, chases her outside and slashes her to death by a fountain. The next day Mary finds no sign of Janey and the cover on a book she left in the room has been slashed. Head honcho Dr. Robert Vance (William Berger) shows up to put her mind at ease. The girl's parents came and picked her up at the crack of dawn, he says. Clearly, Dr. Vance is somehow involved in the murder but as is often the case, may not actually be the killer. This clinic is filled to the rafters with potential murderers.

For starters, there are a handful of loony patients. Elderly, senile Mrs. Hurley goes into fits any time someone touches her “only friend:” A stuffed cat. Schizo Fred (“Max Dean” / Massimo Righi) is convinced everyone is trying to kill him and usually has to be doped up and locked in a room with no furniture or else he may find something to hurt someone with during one of his paranoid, violent outbursts. Dr. Vance's shut-in of a wife Lizabeth (Mary Young) is insecure, jealous, bitter and has a weak heart. There's a strange bald servant (William Gold) lurking the grounds as well as handyman Ivan (“Grant Laramy” / Germano Longo), who's having a secret affair with one of the nurses and happens to own a straight razor identical to the one used in the murder. Loud, echoing footsteps can be heard coming from the third floor but the staff forbid Mary to go up there because the doctor is hiding something up there. That something is Laura (Delphine Maurin); his melted madwoman of a sister-in-law, whose disfigurement he may have been responsible for.

Many years earlier, Dr. Vance was fresh out of medical school, happily married and on the verge of opening a new state-of-the-art clinic in the area. Everything went to hell after an accident at the construction site found Laura falling into a vat of lime and melting off all her flesh. Though the doctor has always proclaimed his innocence, a witness claimed he saw him push her off the scaffolding. Vance was acquitted at the trial due to lack of evidence but the damage was already done. His reputation ruined, he had no other option than to take on dangerous patients no one else wanted and now spends much of his free time experimenting with skin grafts on guinea pigs in hopes of one day being able to restore Laura's beauty.

Meanwhile, Marc (Philippe Hersent) is traveling through the forest late at night headed to the coast where he hopes to unload his adulterous, scheming wife Gisele (Françoise Prévost). After she unsuccessfully tries to seduce him their rickety carriage breaks down and she uses the opportunity to club him over the head. The horses go crazy, trample him to death and run off. Gisele then walks to a cave and spots Dr. Vance burying Janey's corpse. She goes outside and pretends to be unconscious until he's done and can discover her. Vance takes her back to his clinic where she snoops around, tries to seduce him and finally attempts to blackmail him for 50 thousand pounds. Gisele's presence seems to kick the cloaked killer into high gear and he / she grabs the razor again and starts slashing up staff and patient alike before the big reveal.

While watchable, this is still disappointingly routine and predictable. As far as the 60s Italian Gothic horror cycle is concerned, Murder Clinic also came very late in the game. By 1966, there were already dozens of near-identical movies with near-identical plots, near-identical settings and near-identical characters and this one brings nothing of note to the party. Many of the previous films also happened to star more charismatic actors and were made by more creative and stylish filmmakers, which immediately knocks this one off of the priorities list and into the rainy day pile. It was scripted by Ernesto Gastaldi and Luciano Martino; two men who had their hands in writing dozens of Gothics and gialli apiece. Scardamaglia is best known as a producer and production manager on films like The Demon (1963) and Mario Bava's masterpiece The Whip and the Body (1963) and this was his only film as director. The credits have been Anglicized, so the identities of some of the actors (like “Barbara Wilson” and “Mary Young”) remain unknown to this day. 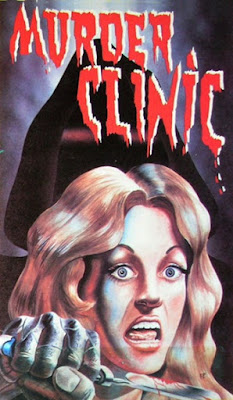 The initial U.S. release in 1967 by Europix Consolidated under the title The Murder Clinic came and went without much attention. Six years later, it was more famously re-titled Revenge of the Living Dead and reissued by the same company as part of their notorious “Orgy of the Living Dead” triple feature. The other two titles shown in the “triple avalanche of grisly horror” were Curse of the Living Dead (1966; aka Bava's Kill Baby Kill) and Fangs of the Living Dead (1969; aka Malenka, the Vampire's Niece). The hilarious ads featured a man in a straight jacket who was supposedly driven crazy from attending a showing! 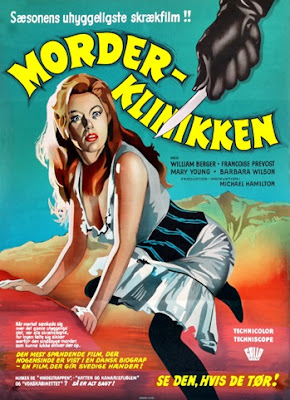 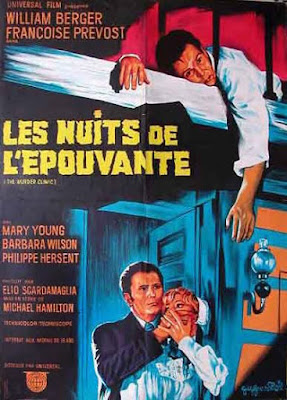 The only way to see an English-language version of this one for many, many years was trying to track down an extremely rare VHS distributed by VCI. It's so rare I cannot even find a box for it. Code Red briefly included a cut, less-than-stellar print (with the title screen The Murder Clinic) in a six film, 2 disc set called “Six Pack: Volume 2.” Seeing how that set has been pulled from their website and is no longer available for purchase one can assume they ran into copyright issues. No need to worry about any of that anymore, though. In 2015 the film finally got a Blu-ray / DVD release from the German company Media Target Distribution. That release (title screen Die Mörderklinik) is the full, uncut version restored and in widescreen with an English language option. Too bad the film itself is hardly worth the trouble.