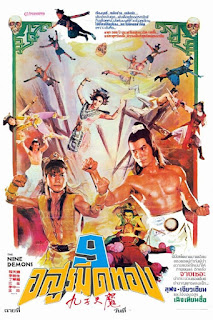 ... aka: 九子天魔
... aka: Demons, The
... aka: Gau ji tin moh
... aka: Nine Deadly Venoms
... aka: Nine Demons, The
... aka: Nine Venoms, The
... aka: Venoms: Nine Demons, The
Directed by:
Cheh Chang
Soon-to-be retiring clan leaders Lord Gan (Peng Chang) and Lord Zuo (Chi-Sheng Wang) are planning on passing on their kingdoms to their respective sons, Joey Boy (Ricky Cheng Tien-Chi, who also served double duty as one of the film's martial arts director) and Gary (Chris Lee Kin-Sang), but fear they may be too immature and unreliable for such responsibilities. However, nobody has much time to really ponder any of that as a detractor, Mr. Yin (Tai-Peng Yu), is plotting against them. He gets a few of his men hired on there as chefs, has them poison their soup and promptly murders both aging clan patriarchs. Gary is injured, captured and taken to a torture chamber while Joey manages to escape into the woods. As luck would have it, the ground opens right up, Joey falls into a deep cavern and enters something called "The Black Paradise," which is pretty much just like hell and only accessible by mortal humans once every five hundred years. Colorful psychedelic lights flash as he meets "The Black Prince of Hell" (Fu-Chien Chang), who offers up his assistance... only there's a Faustian price to pay.

After swearing his eternal oath to the The Black Prince and going through a blood ceremony which involves him being impaled and spraying blood all over some plastic flying skulls, Joey is given the power of the nine demons. The demons (eight acrobatic young boys and their seductive adult female demon "mother") are housed on a skull necklace or bracelet he wears in his demonic persona, which also comes with a snazzy new gold and purple caped outfit. In order to keep the demons in check, he's given a "power plaque" and a "demon sword" and, so long as he holds onto those, the demons will obey his every wish and command. If not, well, they're a little hard to control.
Joey arrives a little too late to save Gary from getting beheaded by a guillotine, but is able to turn back the clock a bit and alter his friend's fate. The duo then take on the killers of their fathers, quickly dispatching them. They part ways and plan on reuniting at a brothel later on. Joey arrives at the establishment first and is unable to keep his demonic influences in check. His first night there, he uses gas to knock out three prostitutes and allows the demons to feast on their blood. After sparing the life of virginal Mia Flower (Ruo-Yu Liu), who's been sold to the brothel by her parents and is being set up by the madam (Yin-Shang Liu) and manager (Chang-Chi Wang) for refusing to do her job, Joey attempts to appease the demons with his own blood but the insatiable hell spawn end up slaughtering everyone in the establishment anyway.

When word gets around the village about Joey being possessed by a demon, some other folks decide to use that to their advantage. Master Law (Feng Lu, another of the film's martial arts directors), his nephew Fuji (Sheng Chiang, ditto), two other cousins and their army of goons figure that since Gary is connected to Joey, that's as good a reason as any to murder him and try to take control of his estate. Only Law's virtuous son, Roland (Chung-Yi Li), opposes what they're doing, but he's eventually caught up in a can't-win type of situation where he's faced with siding with either his evil father or the demon-possessed Joey. Thankfully, a Buddhist monk materializes in the forest just in time to help sway him on the right path.

One of the last Venom Mob-adjacent titles, this is held back from greatness by a weak script and a repetitive, nearly nonexistent plot. It's the type of film where the protagonist is set up in a conflict with another character, kills them in the next fight and then brand new evil characters are introduced immediately afterward simply to give our hero someone else to do battle with. Rinse and repeat. The absence of a strong central narrative results in a film that's episodic, fractured and not particularly compelling. However, if you're able to overlook that and are just wanting a barrage of bizarre, fast-paced supernatural black magic hokum and brainless action, you've come to the right place.

The fight scenes that take up the bulk of the time are all expertly crafted and choreographed, and fun to watch, with the physically gifted cast getting a good platform to show off their skills with martial arts, acrobatics, stunts and various weaponry. The long climactic fight atop a frozen lake and some bamboo poles is a highlight. Though the fx are certainly cheap looking, this manages to camouflage them to an extent with good use of editing and jump cuts, plus bold and unrestrained colorful lighting used throughout. 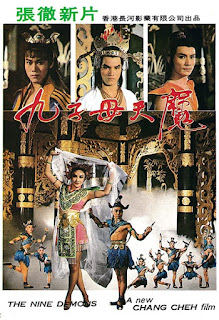 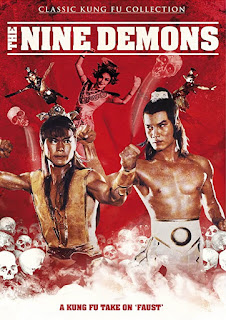 This is one of the only Venom films that crosses over into horror territory. The others are Heaven and Hell aka Shaolin Hellgate (1980) and ATTACK OF THE JOYFUL GODDESS (1983), which features most of the same actors seen here. Made for the Hong Kong Chang He Film Co., this was shot on location in Taiwan and was distributed theatrically by Shaw Brothers. It's available with both an English dubbed audio track (which is one of the worst I've ever heard!) and in its original language with English subtitles. There have been a number of DVD releases over the years from companies like Bonzai Media Corporation, Ground Zero and Terracotta Distribution.
★★1/2
Posted by The Bloody Pit of Horror at 1:52 PM No comments: