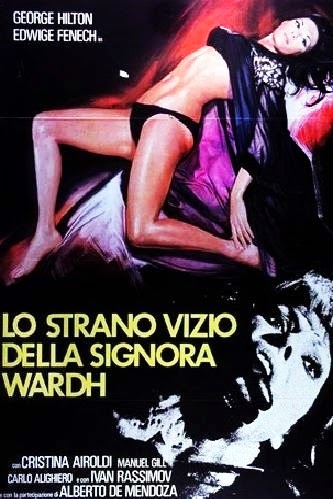 
The Strange Vice of Mrs. Wardh is a twisting horror-thriller that works pretty well at subverting viewer expectations. It opens with a hooker getting slashed up in a car, followed by a Poe quote about "... generations of assassins for whom the love of murder was in the blood, as it perhaps is ours too." French beauty Edwige Fenech stars as Julie Wardh, a young married woman living in Vienna with her older, continually busy stockbroker husband Neil (Alberto de Mendoza) and hiding secrets from her past. The main issue haunting her is her former lover Jean (Ivan Rassimov), a sadist seen in super-stylish flashbacks beating Julie up outside in the middle of a rainstorm and cutting her up with a broken bottle before making love to her with broken glass in between them. Well, Jean has resurfaced in town and is starting to make his presence known. Julie's best friend Carroll Baxter (Cristina Airoldi) hosts a party, and there Julie meets Carroll's handsome, cocky cousin George Corot (George Hilton) and learns that both he and Carroll are sole heirs to a fortune left behind by their deceased uncle. Finding herself drawn to the dangerous Jean once again, Julie (bored and feeling neglected in her marriage) instead opts for an affair with George. Meanwhile, there's the razor-wielding, black-gloved sex killer running around the city. While the psycho's choice in victim has no bearing on class distinction, the victims do share one thing in common: they're usually female and usually not wearing clothes when attacked.

Julie begins to think the culprit is someone she knows after receiving threatening phone calls from someone disguising their voice and bouquets of roses with strange notes attached ("...your vice is a room locked from the inside and only I have the key.") Someone is also blackmailing her; 20 thousand schillings or they're going to tell her husband about the affair. Unwisely, Carroll decides to step in and help. She agrees to meet the blackmailer (all alone!) in a huge, almost vacant park / aviary and is slashed to death. Then Julie is attacked and almost killed in a parking garage (a good suspense scene), so she takes up George's offer to flee Vienna for a small coastal town in Spain before she becomes the next victim... but the killer follows the two there. Making things even more complicated, the two find Jean's dead body in a bathtub full of blood and learn that the serial killer stalking Vienna was simply an anonymous, unknown sick-o... So needless to say, there are several plot surprises coming during the last ten minutes or so. Manuel Gil, Carlo Alighiero as the obligatory police commissioner and Bruno Corazzari round out the cast.

Overall, a fairly well-made giallo that's worth watching, with a decent script, decent acting and pretty stylish presentation from director Martino, who'd go on to make around a half-dozen other similar films, but I'd be lying if I didn't admit that it drags at times. There's actually more female nudity than gore in the film (including a - point being? - scene where two girls in "paper dresses" rip each other's clothes off during a cat fight) and the majority of the main characters are nasty, unlikable and / or screwed up, so it's tough to find someone decent to gravitate to. That aspect is at least partially offset by the occasionally astonishing location work (briefly used coastal locations in Spain and, especially, the Schonbrunn Park / Aviary), some good set-pieces and a few jolts or suspenseful moments... Plus some of the ugliest 1970s wallpaper known to man.

Originally released in the U.S. as Blade of the Ripper, it was badly received by both critics and horror fans once this hacked-up, dark and badly transferred version was issued on home video. Another title using the censored, flat-looking print was The Next Victim. So avoid any of those versions and head straight for the 2005 DVD release from No Shame. It looks great and has some very good extras, including the interesting 30-minute documentary Dark Fears Behind the Door, which features interviews with director Martino, producer Luciano Martino, scriptwriter Ernesto Gastaldi and stars Hilton and Fenech, the latter looking amazingly identical to the young actress who starred in this film nearly 35 years earlier. Apparently there's something in the water over in Europe because many of these starlets who were popular in the 1970s don't look like they've aged a day. Other extras include the theatrical trailer, a poster / stills gallery and a 3-minute speech from the director when his movie played here just recently at the Venice Film Festival. You can also chose between a tolerable English dubbed version or an Italian language one with English subtitles.