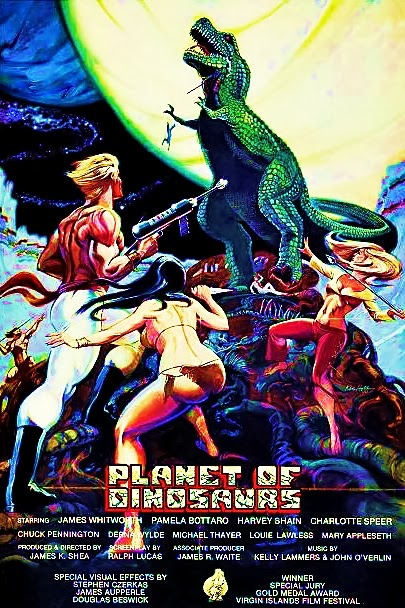 
After having problems with a "runaway reactor," a small escape shuttle with nine people on board manages to get away before their main ship - the Odyssey - explodes. Captain Lee Norsythe (Louie Lawless) and co-pilot Nyla (Pamela Bottaro) have no other alternative than to steer toward an unknown planet and are sucked in by the gravitational pull, forcing them to try to land. They manage to safely crash into a lake and, discovering this unknown planet has an atmosphere almost identical to Earth's, all nine exit and swim to shore while their spacecraft sinks. But this strange new world turns out not to be the safe haven they'd hoped for as chief communications officer Cindy (Mary Appleseth) soon finds out when some kind of aquatic beast gobbles her up. The other eight, equipped with some food, basic supplies and four laser guns, then venture further into the planet to find safer, higher ground and see what they may be up against. As you can probably guess from the title, the prehistoric planet is filled with all kinds of large dinosaurs; some docile, some dangerous. 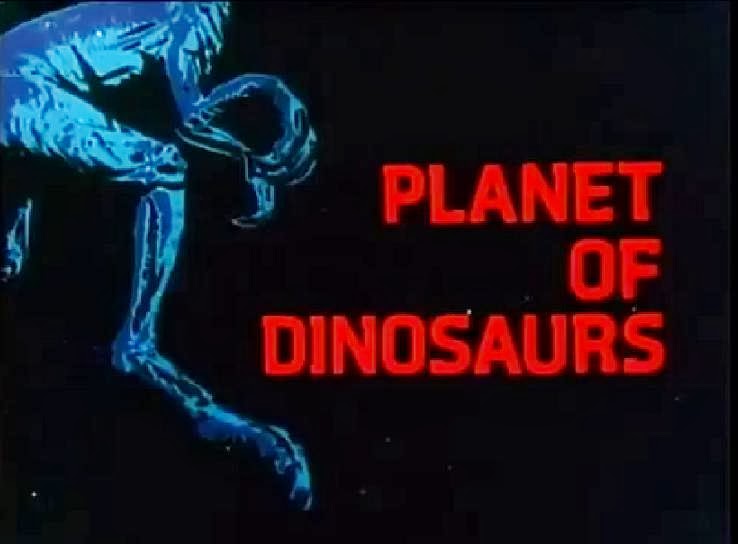 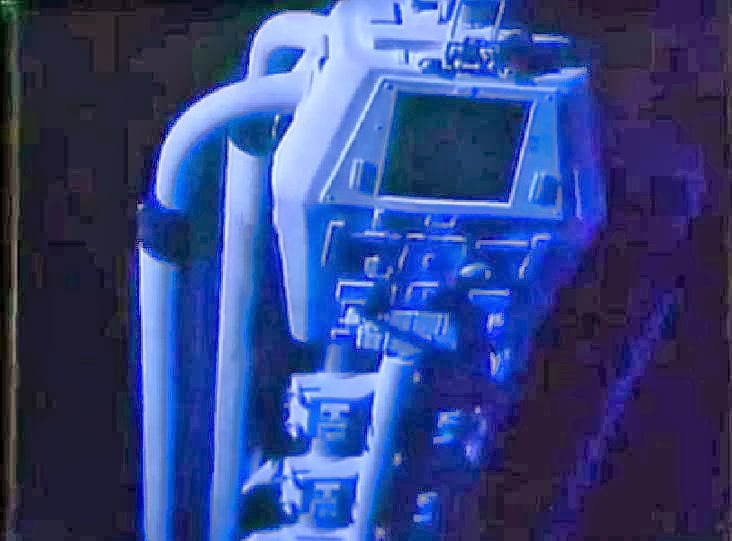 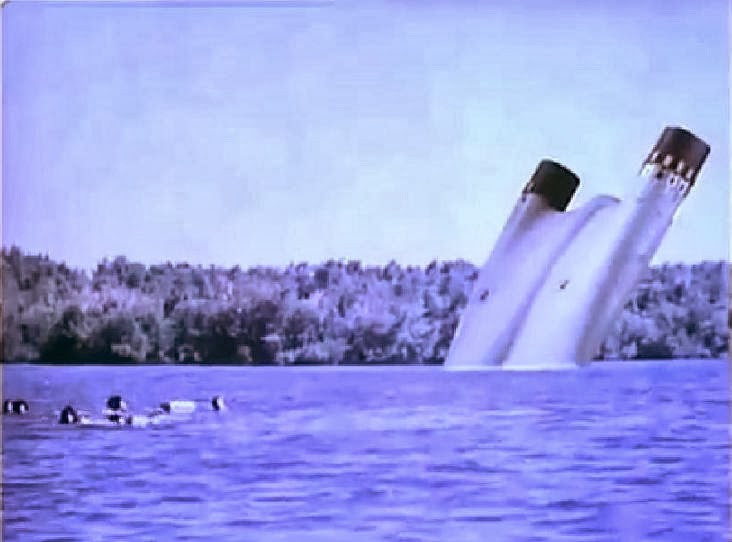 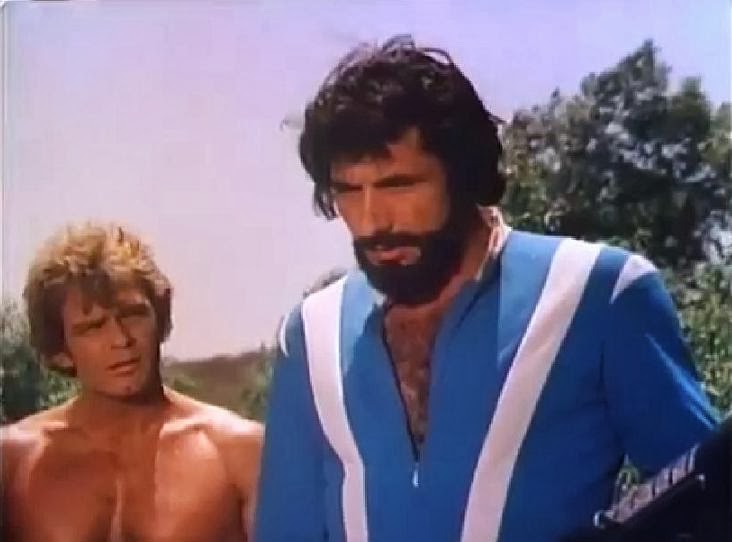 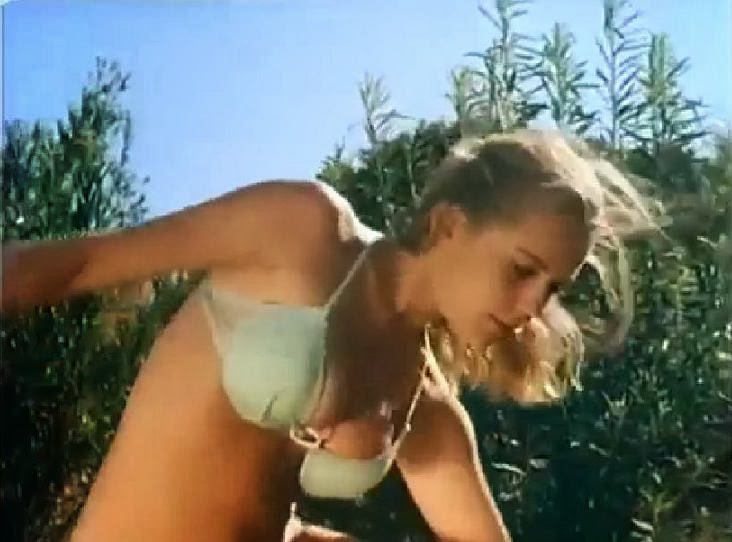 The group, also including engineer Jim (James Whitworth aka Papa Jupiter from The Hills Haye Eyes), officer Mike ("Michael" / Max Thayer), navigator Chuck (Chuck Pennington), nurse Charlotte (Charlotte Speer), Harvey Baylor (Harvey Shain), asshole vice president of Spaceways Incorporated, and his secretary Derna Lee (Derna Wylde) camp out in some swampland for the evening. The next day they spot a harmless brontosaurus, walk on some more and then run across a not-so-harmless tyrannosaurus rex. While the t-rex is busy battling another dinosaur, the gang decide to scale up some rocky cliffs to reach the safety of a plateau where the dinosaurs can't get to them.... at least they think they can't get to them. Harvey manages to anger a centrosaurus by shooting a laser at it and ends up impaled on the beast's horn. 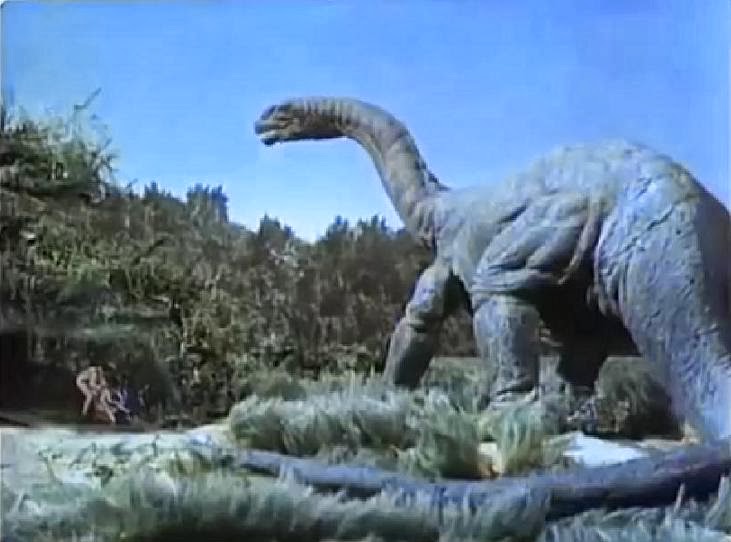 "I am strictly vegetarian but those little moving specks down there sure do look appetizing." 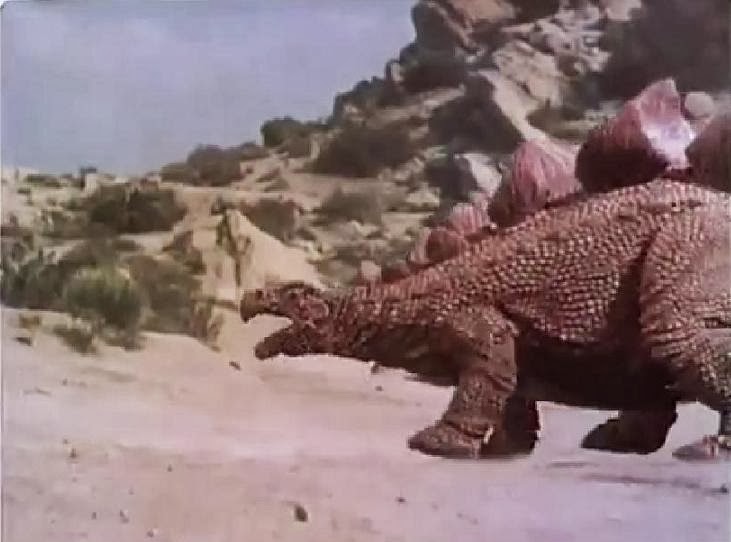 "Those are not specks. They are called actors." 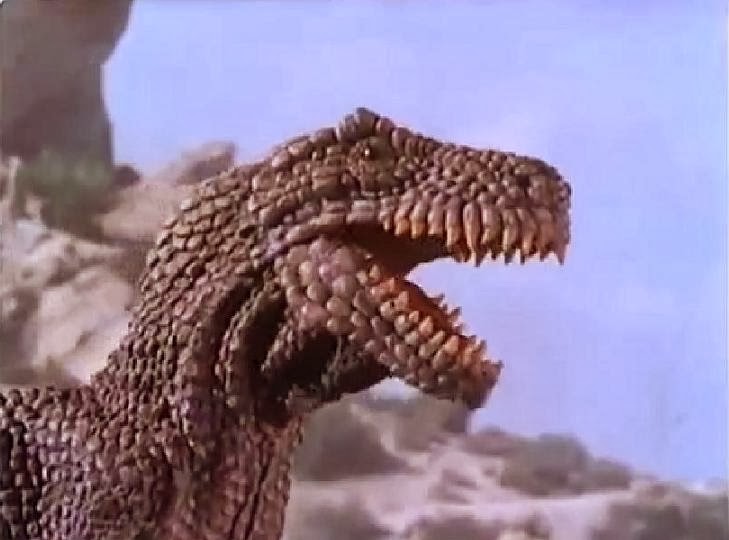 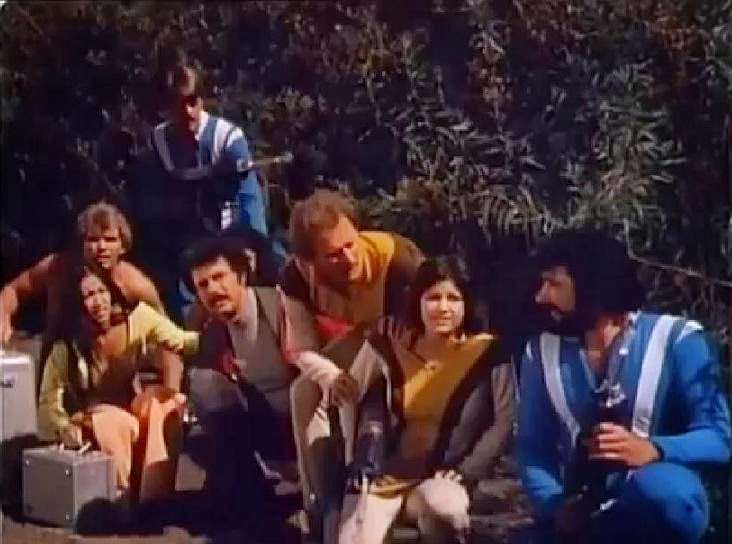 "Hey there buddy. Why don't you watch what you're sayin'?" 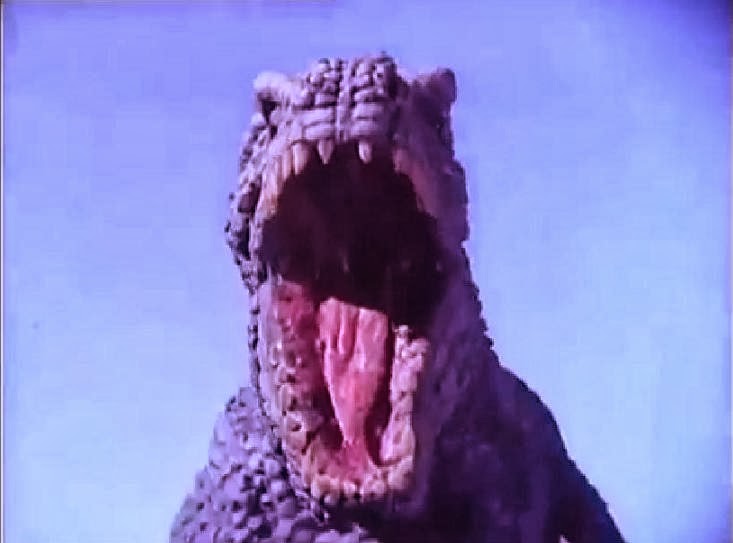 "Awwww, to hell with this! Somebody go get me a napkin."
Realizing they're light years away from Earth and likely never to be rescued, the remaining people come to the apt conclusion that they're going to have to toughen up and work together as a team (there's a brief power struggle between Captain Lee and the more experienced Jim) in order to survive. They set up a blockade to try to keep dinosaurs out, get drunk on fermented berry juice and make spears, a bow and arrow and other useful weapons. A large spider shows up and our heroes sharpen up on their skills hunting down small prey before deciding to take on a certain t-rex dwelling in a nearby cave that's been causing them problems. Several more will die, but will everyone else possibly be able to adjust to the harsh terrain and inhabit this dangerous new world. 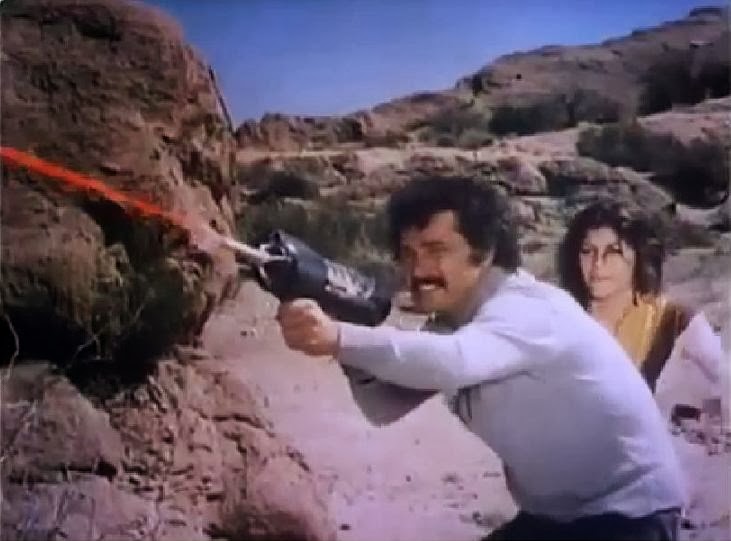 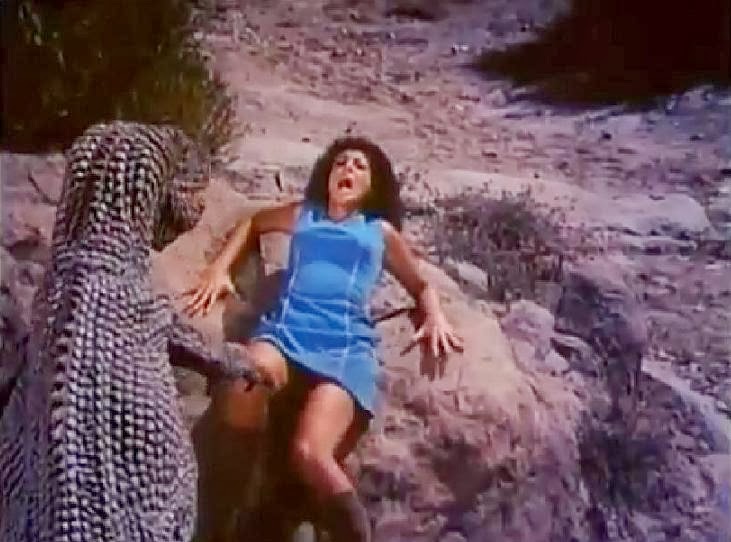 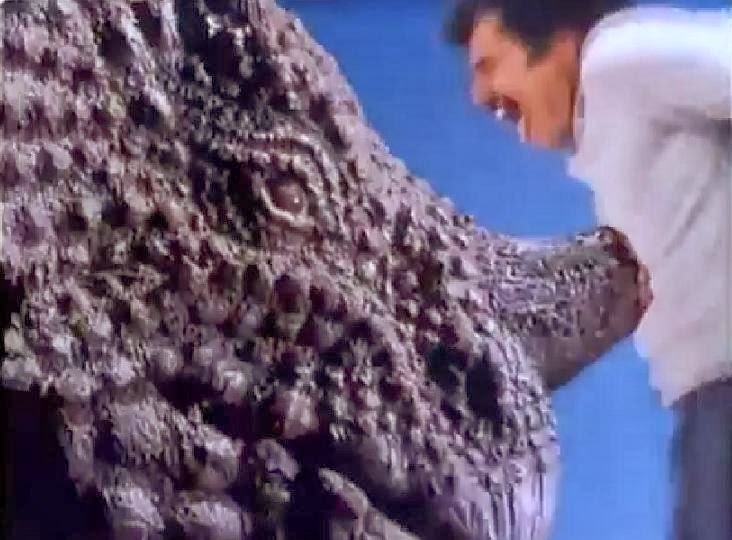 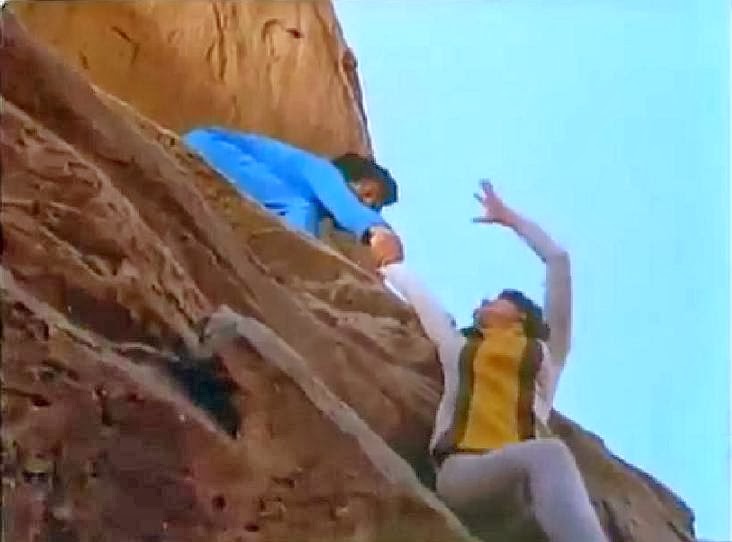 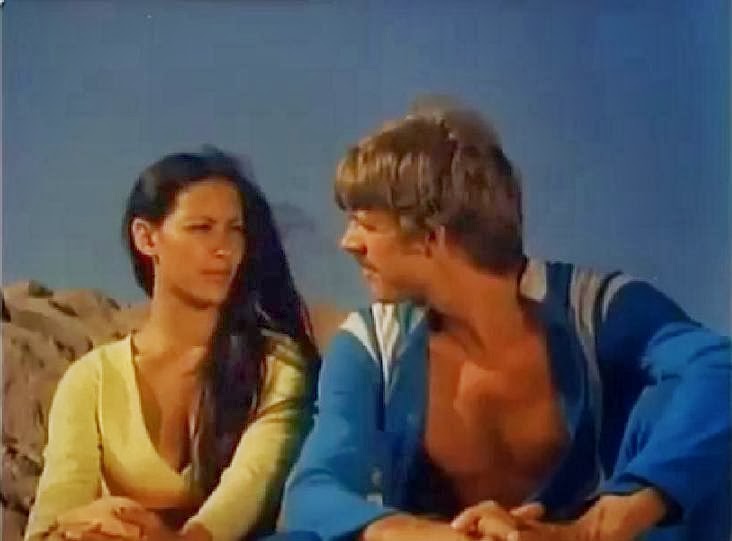 This is a very basic, old-fashioned, low-budget 'lost world' film with a time-worn plot, really awful amateur acting and terrible dialogue. Thankfully, it's somewhat likeable anyway, utilizes the rocky desert outdoor shooting locations effectively and benefits most of all from extremely charming stop motion special effects from Stephen Czerkas (also the executive producer), James Aupperle (who wrote the original story) and Douglas Beswick (who'd go on to work on fx for such later genre offerings as THE HOWLING and Ghostbusters). If you happen to be a fan of cosmic synthesizer scores like me, this also has a good one of those from Kelly Lammers and John O'Verlin. It was shot almost entirely outdoors by Henning Schellerup (with some additional camera work from Ronald Victor Garcia), was edited by Maria Lease and features the matte work of Jim Danforth. 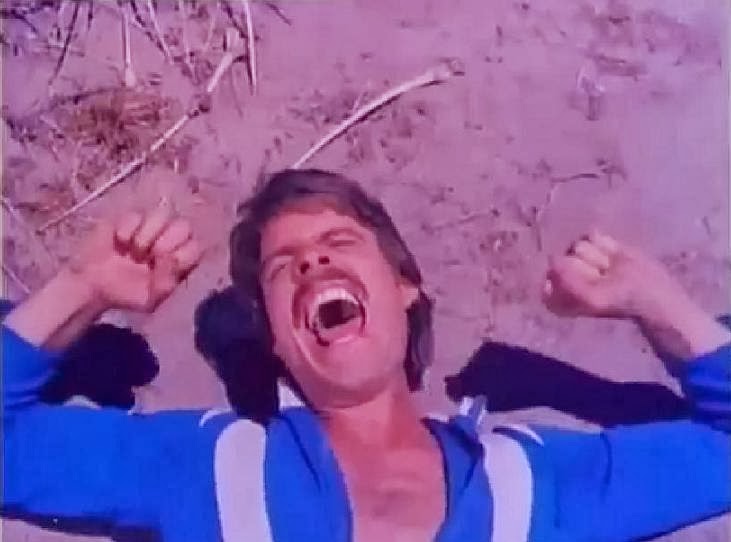 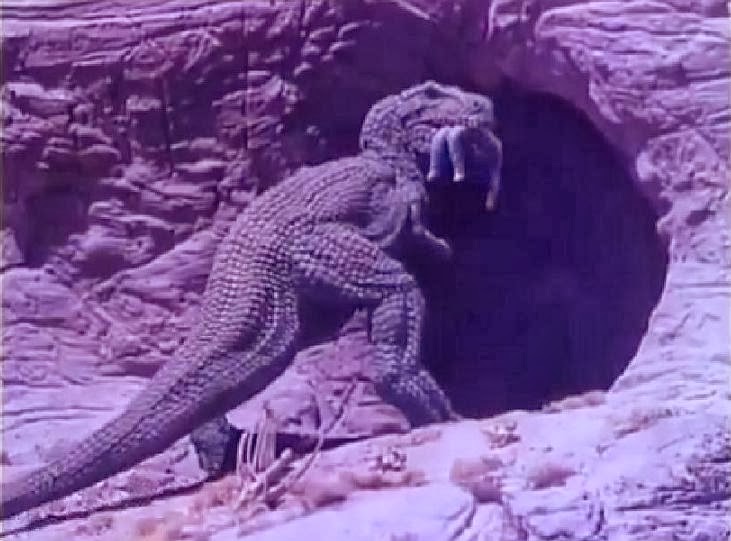 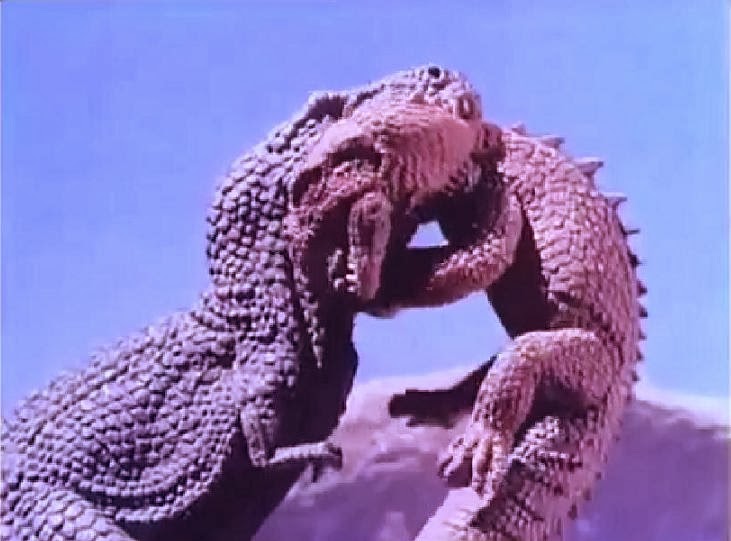 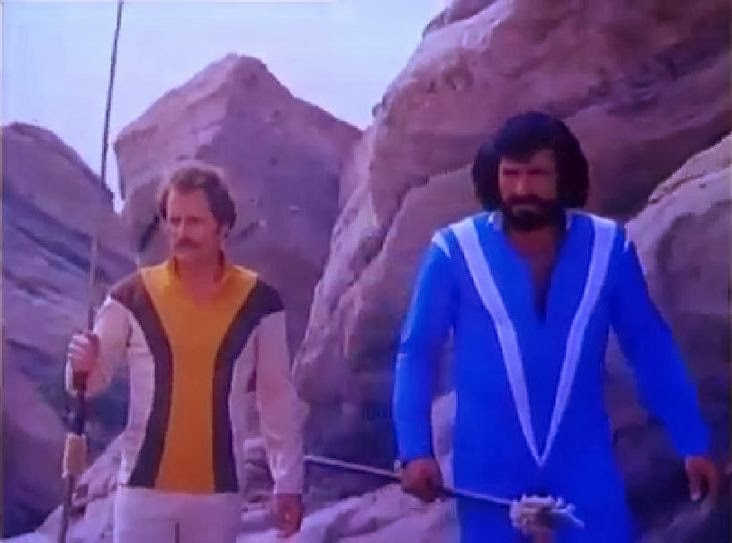 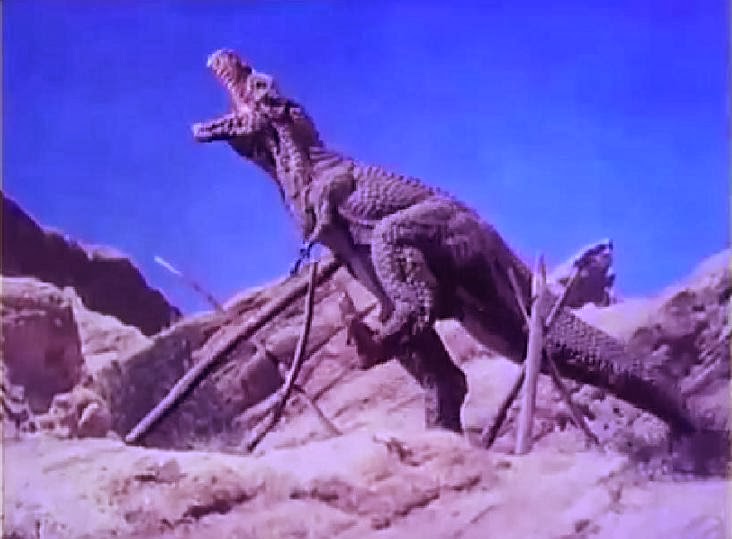 Dinosaurs debuted at the Virgin Islands Film Festival in 1977 and the poster brags about it winning a Special Jury Gold Medal Award there. In 1980, it took home a belated Saturn Award for "Best Film Produced for Under 1,000,000."
★★
Posted by The Bloody Pit of Horror at 6:57 PM No comments: