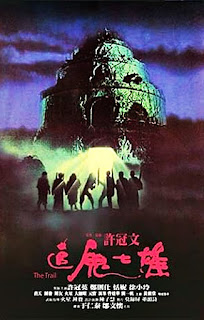 
Developing a love for the cinema from a young age (they were first an escape from a bout with polio when he was just nine years old), Ronny Yu decided to explore film further in America when the time came for college. Telling his father he'd study business or another surefire lucrative profession while abroad, he majored in advertising and communications instead and took as many film courses as he could while earning his other degree. Upon returning to Hong Kong, he went to work for his father's company and became acquainted with a few guys who wanted to get involved in the film business. He then co-wrote a script. After the major studios turned it down, his backer suggested he direct it. It was then a case of learning on the set for the young, inexperienced director, who had no clue what he was doing and relied on the cameraman, editors and other more experienced crew people for advice. The resulting film, the 1979 crime-drama Cheung laap cheing ngoi (or The Servant), ended up becoming a surprise hit, which led to other opportunities. The next decade was spent making a number of films in various genres, but it wouldn't be until 1993's Bai fa mo nu zhuan / The Bride with White Hair (a winner of three Hong Kong Film Awards) that Yu would receive international attention. Hollywood eventually came calling and he ended up directing both Bride of Chucky (1998) and Freddy vs. Jason (2003).


The Trail was Yu's fourth film, his second film for Golden Harvest Company and his first horror effort. It's worth noting that even though the Internet Movie Database lists it as an adventure / comedy, other Hong Kong databases categorize it (correctly) as a horror / comedy. It's a good thing I stopped relying on IMDb and their genre tags long ago to come up with my horror lists or else I'd be missing out of hundreds of horror movies here. Speaking of IMDb, this has a paltry 30 votes and a middling 5.9 rating over there. That really needs to change. I would say poor distribution is the main reason why this is so under-seen but that doesn't seem to be the case. There was an English-subtitled VHS release by Tai Seng, a VCD distributed by Mega Star and a DVD from Fortune Star. 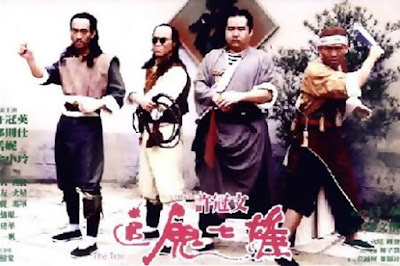 The setting is the Xiang Xi Provence of China in 1922. Wealthy, evil Master Miao (Miao Tian) is used to getting whatever he wants and getting away with whatever he does, in part because his father has been struck down with leprosy (supposedly bad karma from being a playboy for years) and doesn't have control over much of anything anymore. Those indebted to Miao's family usually have a steep price to pay, especially those with daughters that can be bartered as sexual favors to buy them more time in paying back the money. One evening, Miao demands the company of a beautiful songstress (Siu Ling Tsui). When she refuses to put out, he drowns her husband in a fish tank, leading to the song bird's suicide. Miao quickly wants rid of the musician's corpse so it doesn't ruin his reputation, so he has the body wrapped up like a mummy and hands a bag of gold over to two monks and tell them to dispose of him. The monks; Ying (MR. VAMPIRE co-star Ricky Hui) and “The Captain” (Kent Cheng), actually aren't monks at all, but opium smugglers.


Along with the rest of their seven-man smuggling operation; brains of the operation Reader (Anthony Chan), wonky-eyed, sunglasses-sporting Little (Addy Sung), oafish Bo (Cheng Fu Hung), skinny Fatty (Mars) and silver boomerang-armed cool cat Flint (Fat Chung), the men hit the trail to their next destination with plans of disposing of the corpse somewhere along the way. While going through a bubbling sulfur swamp, Ying and Bo get stuck in a quicksand bog and have to be rescued but they lose the body when it sinks down into the muck. Assuming they've done the job of getting rid of the body, the men carry on, encountering a group of thugs along the way and getting on their bad side after accidentally cutting off the leader's ear. Those men won't be the only problems they'll face when the corpse rises from the swamp looking for revenge.

The men stop by an inn, where Captain gets in hot water with drunkard innkeeper Walter Tso's flirty younger wife (BLACK MAGIC star Ni Tien aka Tanny) and ends up getting his legs shaved in the process. Later that night, one of the men is found with his head twisted around backwards. The next morning, villagers swing in to the inn to complain about finding their pigs and chickens dead, drained of blood and smelling like sulfur. A superstitious old woman says these are all signs that a zombie is on the loose. And, as well all know, there are several ways to fight a zombie... Fire? Well, no. Decapitation? Sure, but not here. Smashing in the brain? Hmmm... did you forget we're in Hong Kong? Try yellow paper, nets, learning how to croak like a frog and, of course, urine from a virgin. Knowing they will have a tough fight ahead, the men get busy making up strips of spell papers, practicing their bellowing and having little prepubescent schoolboys pissing in pots for them to use later on.

The action moves back to the woods to a crumbling old temple, where the men encounter the slimy, lumpy-faced zombie late at night but are unable to kill it, plus waste all of their hole-y water trying. The next day, they descend down into a series of caves and locate an awesome “king's tomb” lit with blue and green lights and full of human bones, stone statues of Terracotta warriors, mice and snakes. After locating the zombie and unsuccessfully attempting to kill it, only two of them make it out of there alive. We also check in with the tormented Miao from time to time and learn he's being haunted by horrifying visions of the creature and signs that it's coming his way.

Things gets really crazy during the last twenty or so minutes. Our heroes (decked out like scarecrows) battle the zombie once again with the help of a powerful Taoist priest (Shu Tong Wong), but attempts to do it in with fire and lightning bolts shot from a rosewood sword don't work. After finding out what Miao has done to prompt this curse in the first place, our heroes attempt to blackmail him for gold and find themselves being used as zombie bait instead. That leads to the zombie showing up to go the Jaws route and chomp some men under the water, plus decapitate one with its tongue and cause a house boat and dock to blow up. Not good enough? How about an out-of-left-field send up of a famous scene from The Exorcist (1973) to wind things down?

This is a very well-made, nicely-photographed, atmospheric, energetic and very busy film. There's so much going on and so many characters to keep track of it's sometimes difficult to follow (especially in the first half), but things eventually settle in quite nicely. Yu co-wrote with comedian Michael Hui (also the producer) and their script offers up numerous hilarious moments, plus many more sure to at least put a smile on your face, without short changing viewers on the action and horror in the process. I've seen enough by now to know that's not an easy thing to pull off and most fail at it, but this one seems to find the right balance. Production design is excellent and the actors acquit themselves well and seem perfectly chosen for their particular roles. In addition to a sometimes confused narrative, this also gets dinged for stealing much of its music from other films, most notably Tangerine Dream's score from William Friedkin's Sorcerer (1977) and Ennio Morricone's score from John Carpenter's THE THING (1982).


Yu's horrorography also includes The Occupant (1984), a romantic horror comedy about a haunted apartment, Bless This House (1988), a more serious ghost story about a family moving into a new home that's haunted, and The Phantom Lover (1995), a Phantom of the Opera-inspired tale set in a 30s-era theater. He also directed "Family Man;" one of the better episodes of the short-lived series Fear Itself.