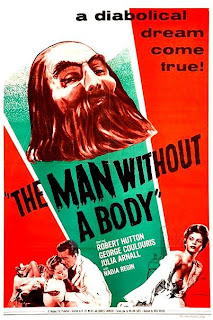 
Arrogant, high strung, obscenely wealthy New York business tycoon Karl Brussard (George Coulouris) has been suffering from double vision, hallucinations and bouts of dementia, and learns that he not only has an inoperable brain tumor but that his days are numbered. Still, he insists that money can buy anything... or anyone. As a last resort, his physician recommends he take a trip to London to consult with Dr. Phil Merritt (Robert Hutton), a brilliant young scientist known for his brain transplant experiments. Accompanying Karl overseas is a money-grubbing, pampered, much-younger Serbian woman named Odette (Nadja Regin), who he tells others is his adopted daughter but is actually his mistress. During his visit with Merritt, Karl is impressed enough with a fully functioning eyeball and a living monkey head (!) kept alive with an artificial heart and lungs that he decides that he'd like a new brain himself. As he is with his business dealings, Karl is with his transplants. He only wants the best!
.
During a trip to Madame Tussaud's Wax Museum (where we get to see about 20 exhibits), Karl learns a little about the intellect and accomplishments of Nostradamus and decides that's the guy for him. He enlists the aid of a desperate, discredited doctor (now a drunk) to accompany him to France to help. The two somehow manage to raid Nostradamus' tomb, remove his head (which is surprisingly well preserved considering he's been dead for almost 400 years!), sneak it through customs and then take it to Dr. Merrit's lab. Merritt puts up a little resistance at first ("Grave robbing is a crime!") but then agrees to try to bring the head back to life and possibly graft it onto Karl. Assisting him are a colleague, Dr. Lew Waldenhouse (Sheldon Lawrence), and a female assistant / nurse, Jean Cramer (Julia Arnall).

The head of Nostradamus (played by Michael Golden) is submerged in a water tank and next thing we know it's alive and having conversations with everyone. Unfortunately, Nos has no desire to go on living because he feels it is against nature. In several hilarious scenes, Karl tries to convince Nos (who announces himself as Michel de Notre Dame) that he's actually him... and then tries to get some financial advice before heading back to New York to do business! The advice backfires and Karl returns to London infuriated and broke. Further pissing him off is Odette. After her advances are rejected by their chauffeur (Maurice Kaufmann), she moves on to romancing Lou. When Karl catches the two of them together, he strangles her and then shoots him. Lou stumbles back into the lab and keels over, so now there's a fresh body and a Nostradamus head in need of a body. Guess what happens next?
.
This premise is so absurd (yet coupled with some genuinely intriguing ideas) and it's all played so straight that I couldn't help but find the whole thing an unexpected delight. It's almost like the British answer to THE BRAIN THAT WOULDN'T DIE (1959). Excellent character actor Coulouris (CITIZEN KANE) may have been slumming here, but I loved his performance (a rare lead for him) and egomaniacal character. During an early scene when he's informed his mistress might commit suicide, he looks over at his maid and says "Let her!" He also gets to go on several over-the-top, delirious rants ("My brain! It's alive!") as well as deliver a ton of hilarious dialogue ("Restored a dead monkey's head after six years?") and does it all with a straight face. Bravo! Hutton is a bit dull and the rest of the cast is just OK, but Coulouris carries it just fine by himself. Post-surgery, Nostradamus gets to briefly lurk around with his head enclosed in a huge plaster box. And to top it all off, there's a tragic ending that's surprisingly effective.
.
Since there are two credited directors, and scenes taking place (but no necessarily shot) in three different countries, I'm not sure exactly who did what or if it was a collaborative effort. Saunders also made the 1958 film WOMANEATER, while Wilder (the brother of Billy) has many credits in the horror genre: PHANTOM FROM SPACE (1953), KILLERS FROM SPACE (1954), THE SNOW CREATURE (1954), FRIGHT (1956), BLUEBEARD'S TEN HONEYMOONS (1960; which also featured Coulouris, as well as Lawrence) and THE OMEGANS (1968).
.
As of this writing, there has been no official VHS or DVD release of the film. 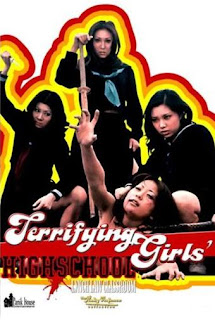 At the School of Hope for Girls, an utterly ridiculous boarding school that prides itself on turning the delinquent teenage criminals of today into the obedient housewives and child bearers of tomorrow, three new transfer students; girl gang leader Noriko (Miki Sugimoto), "Razor Blade" Remi and slutty bisexual Kyoko have just been brought in by the cops to be whipped into shape. Soon enough they find themselves facing off against the "disciplinary committee," a gang of sadistic bullies who are paid off by the school's corrupt vice president to torture the students who get out of line or challenge authority. Sounds fair enough for a sleazy little exploitation film and this movie opens on high note as a tied-up girl is slapped around, belittled, gets her breast cut with a scalpel, has her blood slowly drained and is then knocked off the school roof. Noriko discovers the murdered girl is actually a friend of hers and vows to get revenge. There's also a wealthy tabloid reporter involved who also wants to see the school crumble for his own reasons. Unfortunately for this viewer, the opening scene is the sole shocking moment in the film and one of the only memorable things about it. TERRIFYING GIRLS... is classified as "pinky violence;" something I'm not too familiar with. Apparently it's a subcategory of Japanese films of various genres that try to cram in as much T&A as possible because they could not legally show pubic hair. I guess for fans of this kind of film, it delivers the goods, with many scenes of gorgeous Japanese women sans clothing and in various sexual situations, some a little kinky and others a little comic. But to me, something was really missing that kept the film from being as good as it otherwise could have been. It's adequately sleazy, but there is also an element of fun that's missing.

Don't get me wrong, it's not terrible or anything. I was just surprised at how pedestrian much of this seemed and how bland even many of the more outrageous scenes came across. I think it has something to do with the overall uncertainty of tone and the fact the characters (even the supposed heroines we should be cheering on) are all so nasty, one-note and/or unlikable. Kind of takes away from the pleasure of seeing girls kick ass when you don't even really care who wins in the end. The premise, and the depiction of the school, is impossible to take seriously for one second. That wouldn't be a problem at all, except for the fact that the film wants us to start taking it - and its characters - seriously toward the end. I actually really didn't care much by then, despite a few entertaining and amusing moments here and there. I'm sure the making-girl-do- push-ups-after -a-red-hot-light -bulb-inserted-her-vagina gag will go over real well with some people. There's also nipples getting shocked with electric wires, the girls bringing in a rubber band so they can gang bang an elderly teacher and other things that sound outrageous on paper but aren't quite so outrageous how they're set up and visualized here.

It is the second entry in a four-part series the began with WOMEN'S VIOLENT CLASSROOM (1972). I probably won't be making these a priority.