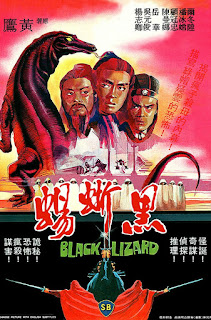 
Young Long Fei (Derek Yee Tung-Sing) has built up a good reputation as an expert fighter and foe of injustice. His latest gig will find him escorting a prisoner across the border to the capital. The trip will take two long years and his new fiance Zhi Zu (Helen Poon) is just going to have to wait it out until they can marry and he can start his new job at her uncle's security bureau. Several years later and just as his job has come to an end, he stops by an inn, where a message is shot into his room with a dart. The message gives a meeting location and is signed "Visitor from Hell." Gee, I think I'd pass on that particular invite, how bout you? Nevertheless, being the evil-squashing stalwart that he is, Long Fei can't resist such a proposal. Upon arriving at the selected locale, a pale-faced man in black (Kung-Chung Ku) informs him that Zhi Zu is going to die. Long Fei immediately starts racing home and crosses paths with a facially scarred man dressed in red who's hauling a coffin containing a wooden replica that looks just like his bride-to-be. The man grabs the coffin and disappears.

Long Fei finally arrives back home and, to his relief, finds Zhi Zu alive and well. However, some perplexing things have gone down while he was away. For starters, Zhi Zu's aunt, Xian Jun Xiao (Man-No Chen), is no longer around after her only son, Ruo Yu (Yuan-Chun Wu), supposedly went mad, grabbed her and jumped into the river. No one has seen either for two years, no bodies were ever found and both are believed to be dead. Long Fei finds that especially odd considering the first person he saw when he returned was the aunt and she was carrying around a green lantern, a sign that he later learns means she's probably a ghost. Second, as a result of losing both his wife and only child in one fell swoop, Uncle Lik Xiao ("Yuan Hua" / Elliot Ngok) quit the security bureau, disappeared shortly thereafter and also hasn't been seen since either. Later that night, Long Fei has another encounter with both the man in red and the aunt, who are caught plotting in the aunt's abandoned house, but both disappear before anyone else can see them. That's quite a homecoming Long Fei is having.

Uncle Xiao finally returns to his home just in time to relay some important information. Nineteen years earlier, he was traveling through the woods, got lost and and ducked into an old home. There, he encountered a large black lizard with green, glowing eyes that transformed into a man and fought with him. He stabbed and then set fire to the creature but not before it placed a curse on him. Xiao's son Ruo Yu was born soon after with a lizard-shaped birthmark on his back. Once he reached adulthood, he revealed himself to be the reincarnation of the creature, capable of transforming from a man to a monster. Ruo Yu then killed his mother and jumped into the river. The river empties out into a reputedly cursed body of water called - what else? - Lizard Lake, where local legend has it a lizard metamorphosed into a spirit a thousand years earlier. Said spirit is said to reappear once every three years, in which time it must claim a victim.

Long Fei and his friend, Constable Tieh (Chien Sun), who is dragged into the action after receiving a threatening letter himself, must set out to stop the black lizard. They're informed that if Black Lizard and the mother's ghost are able to eat the wooden replica of Zhi Zu she will die. A somewhat crazed but still-living Ruo Yu is located inside the wooden idol but he doesn't remember much, not even his old nanny (Hui-Ling Liu), and he's struck down by a spell called "Ice Palm" that temporarily incapacitates him. Family secrets are soon revealed, including a possible extramarital affair involving Zhi Zu's widowed father (Yong Wang) and what starts out as your standard ghost / family curse movie turns into some else entirely... something more akin to Scooby Doo... right down to the rubber masks!

Filled with twists and turns, which are progressively sillier as the film goes along, this is a fairly efficient time waster that looks like a million bucks with great production values, photography and art direction. There's a silly-looking monster, ghosts, cannibalism, grave robbing, lots of atmosphere achieved through fog and colorful gel lighting (mostly greens), plenty of fighting (sword and kung fu) and even an attempt to bury someone alive in a double decker coffin. While there are some obvious problems with the plotting, at least this one's not overloaded to the point of complete incoherence like many others of this type. Corman's The Masque of the Red Death (1964) and Bava's Kill, Baby Kill (1966) were obvious visual inspirations; this even directly swipes the same POV shot from a swing from the latter. 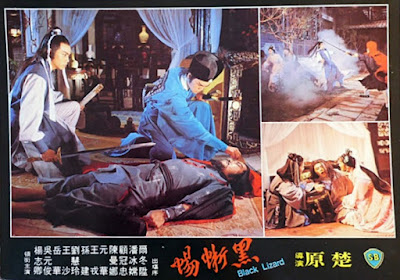 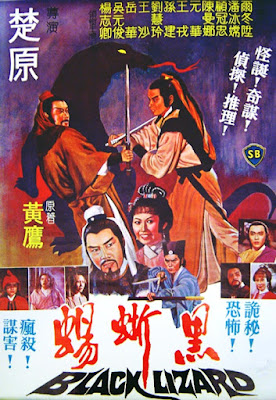 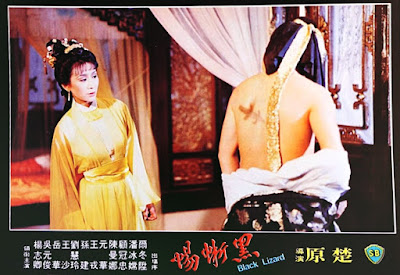 Leading man Derek Yee, the son of a famous acting couple, started out at Shaw Brothers in the late 70s and quickly became a star there. He appeared in around 40 features for the studio in total, including BAT WITHOUT WINGS (1980), also for Chor, and HELL HAS NO BOUNDARY (1982). However, he achieved his greatest fame after his stint with Shaw as an independent filmmaker, with box office hits like The Lunatics (1986), C'est la vie, mon chéri (1993), One Nite in Mongkok (2004), Shinjuku Incident (2009) with Jackie Chan and others. To date, he's been nominated ten times for Best Director at the Hong Kong Film Awards (winning twice) and won pretty much every other major award the country has to offer. His co-star Sun, of Five Venoms fame, didn't fare so well and ended up in Tomas Tang productions after Shaw stopped making films in the mid 80s. 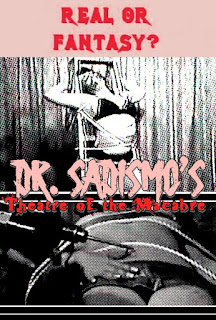 ... aka: Dr. Sadismo's Theater of the Macabre


Journalist Miss Mason (Beverly Eaby), who's doing an investigative report on occultism, goes to interview Professor Canin (Bob Rose). Canin has already made a notorious Satan-themed horror film but now dedicates his time to running and starring in his "Theater of the Macabre," which depicts tortures and murder conducted by Canin's alter ego "Dr. Sadismo." Miss Mason expresses concern about "actresses lowering themselves in these exploitative put-ons" but next thing we knows she's swept up into the demented doctor's world of torture. She's first stripped to her panties, gagged, tied to a ladder and whipped bloody. Then she's nude on a table, where Sadismo slices open her stomach and pulls out her guts. That turns out to only be the making of a movie: Canin has either managed to talk Miss Mason into appearing in one of his gory horror films or (more likely) Miss Mason was an actress playing the role to begin with.


"Dr. Sadismo" then steps out for a minute as stagehands Billy (Jamel Elam) and Wes (Walter Epps) stop by to clean the blood off her stomach and adjust the camera so they can shoot "more inserts." Miss Mason whines about being tired and threatens to quit but Billy instead ties her to the table with a rope. She makes an aside about this ruining the continuity, which is hilarious if you've seen any of the other films from this particular company. 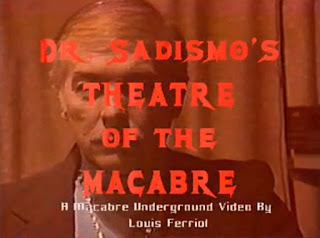 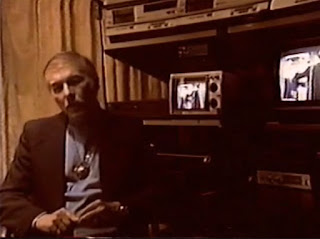 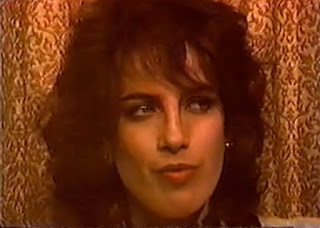 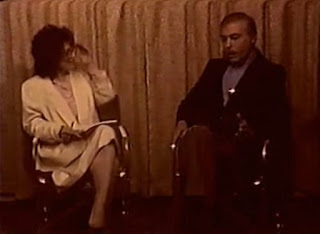 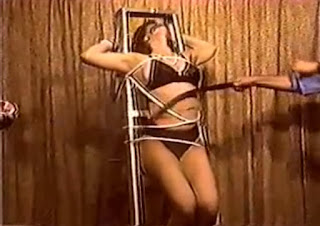 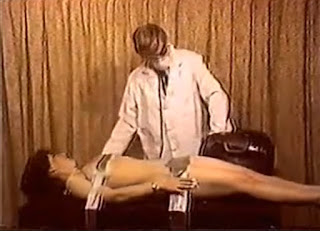 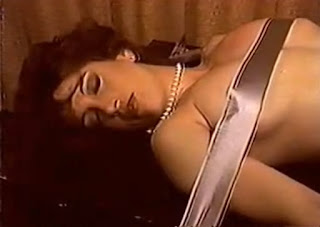 Now really tied to the table, Miss Mason is informed she'll be appearing in a snuff movie. She's gagged, has one of her appendages sawed, gets drilled in the crotch and has her throat cut while the mostly off-screen crew members address her, each other and us; the potential audience for such a tape. One of them says, "I think she's dead, folks. What do you say we cut off her leg?" and then it's all over. 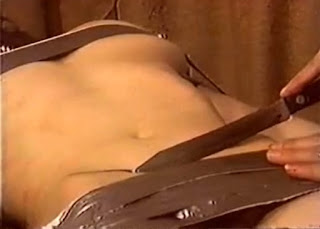 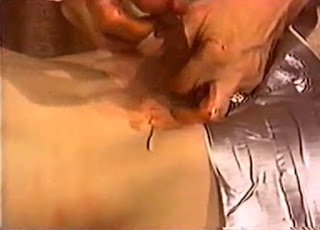 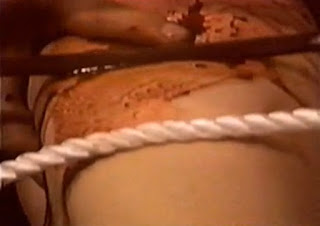 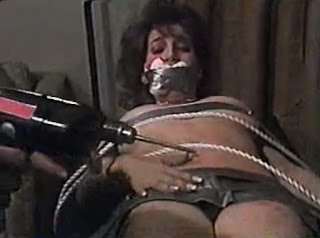 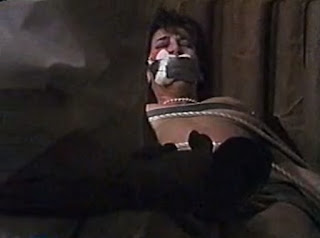 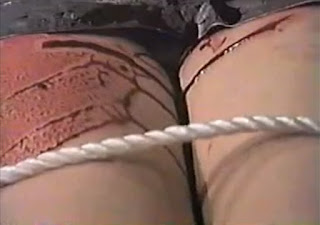 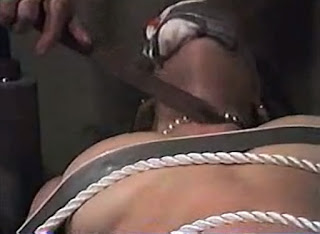 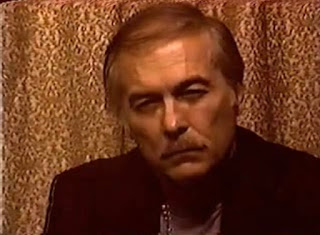 I don't know if the makers of this 12-minute short attempted to pass it off as a real snuff tape (it keeps asking us if it's "real or fantasy?") back in the 80s but it's not particularly convincing and was clearly inspired by early torture flicks like The Wizard of Gore (1970) and BLOODSUCKING FREAKS (1976). It also could have been made in response to Guinea Pig: Flower of Flesh and Blood (1985), which was first distributed in the U.S. by the same company: Carlson International / Vidimax.