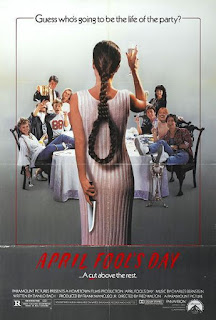 
What appears to be your standard 80s slasher movie for the first 80 or so minutes pretty much is just your standard 80s slasher movie for the first 80 or so minutes, only more restrained. Much more restrained. One could even say curiously restrained... almost as if there's a reason they're being so restrained. Hmm. Yet this one has a reputation for being "different" and "clever" and "a cut above the rest" because there's a pull-the-rug-out-from-under-the-audience "surprise" ending that anyone with an IQ above 70 should be able to figure out given the film's title. But even if that wasn't the case, this is far from the first genre film to even use this same ending (you can go all the way back to at least 1935's Mark of the Vampire) so how this got singled out for adulation is beyond me. I suppose the twist had never been applied to a slasher flick before but, really, so what? This particular genre's bread and butter is high body counts, gore, inventive killings and nudity, so to strip an otherwise pedestrian whodunit slasher of all of its exploitative elements and then put a recycled gag ending in its place makes this worthy of praise how exactly? 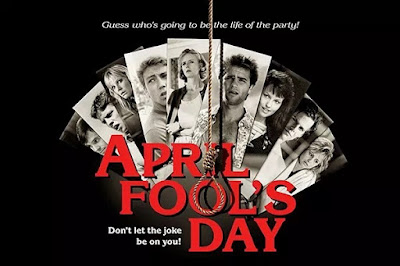 It's Spring Break and rich Vassar college student Muffy St. John (Deborah Foreman) has invited some of her "privileged" (and mostly repellent) collegiate chums to spend an "unforgettable weekend" on a private island that her family owns. Among the attendees are the perverted / obnoxious weirdo Chaz (Clayton Rohner), oversexed and sarcastic Nikki (Deborah Goodrich), studious and uptight Nan (Leah Pinsent), womanizing jock Archie (Thomas F. Wilson), try-hard country boy Harvey (Jay Baker), who's basically there to try to brown nose his way into a job with the hostesses' multi-millionaire father, Muffy's very distant cousin Skip (Griffin O'Neal, who was indicted on drug-related manslaughter charges a few months after this film was released) and comparably normal couple Kit (FRIDAY THE 13TH 2's Amy Steel) and Rob (Ken Olandt), who have some minor drama going on about whether or not he's going to medical school.


The island requires a ferry to access and, on the trip over, a couple of the guys decide to pull a morbid prank on everyone. April Fool's! However, said prank ends up leading to the "real" injury of deckhand Buck (Mike Nomad), who gets his face smashed when he's crushed between the boat and dock. After he's rushed off to the hospital, the local constable (Tom Heaton) shows up and tells them they're forbidden to leave unless they hear from him otherwise. The only way for him to get back to the city is to borrow the St. John families only boat. Now everyone is trapped on the island and forced to endure a barrage of gags Muffy has booby trapped the house with, including whoopie cushions, collapsing chairs, exploding cigars, rigged lights, leaky pipes, doorknobs coming off, etc. And what better time for a psycho to start bumping them all off one by one?

Skip, who's feeling responsible for the accident that hurt the deckhand, is the first to disappear that first night. While fooling around in the boat house with her boyfriend the following day, Kit sees his corpse floating under the floorboards. The guys then split up and start searching the island, but Arch finds himself hanging upside down by his leg with a snake about to strike and doesn't return to the mansion. Due to Muffy's sudden bizarre behavior, the miserable Nan wanders off and we don't see her again either. That is, until Nikki stumbles upon her corpse, and the heads of the two missing guys, in a well. Others get bumped off (all off screen) until only Kit and Rob remain. They then find clues scattered about that suggest their hostess has an evil identical twin who's recently escaped from a mental hospital.

One thing that needs to be addressed out of the gate are these contemporary critics proclaiming that this beat Scream to the punch by a decade and a half when it comes to self-aware slasher flicks. Back in reality, the two films are in no way, shape or form comparable. Name dropping Agatha Christie one time does not a self-aware film make. This is frequently also referred to as a spoof. How exactly does it spoof anything? This neither references nor playfully toys around with slasher flicks or slasher flick conventions and hits every beat one would expect from a routine slasher right up until the twist. If this was meant as a spoof it's one of the least clever spoofs I've seen. Part of me thinks those claims were just Paramount's way of marketing the film in light of the success of their critically-despised Friday the 13th series. As in, "See! We're making fun of ourselves now!" Except they're not.

While this does boast a generally likable cast (Valley Girl's Foreman; Summer School's Olandt; Just One of the Guy's Rohner and Goodrich), none of them are likable in this particular film due to the script. Nearly everyone is an asshole and not getting to see any of them actually die is incredibly unsatisfying. Besides, what's the point in scripting stock slasher victim characters if you're not even going to bother doing anything interesting or humorous with them? Least said about the rest of the script, the better. The more you actually think about the plot, the dumber the movie gets until you're left sitting there feeling completely insulted.

Any praise that can be doled out goes primarily to the genius who designed the poster and some of the production people. This is, technically-speaking, slickly made and well-produced, especially as far as 80s slasher flicks are concerned. Some studio head obviously put more faith in this than they did the entire Friday series, as no Paramount-produced Friday film surpassed the 5 million budget April Fool's Day was given. And yet every previous, and later, Friday film managed to far outperform April Fool's Day at the box office. Go figure. 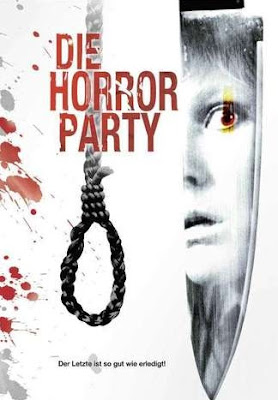 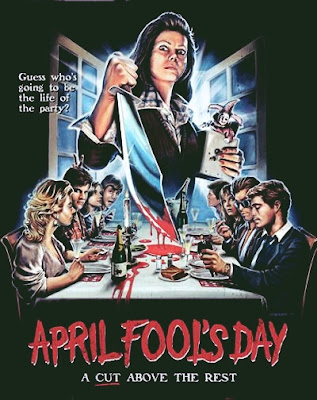 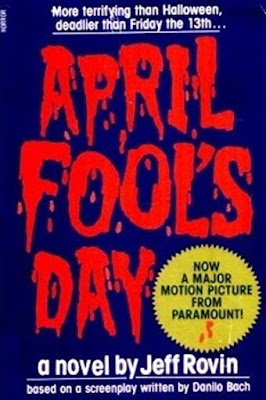 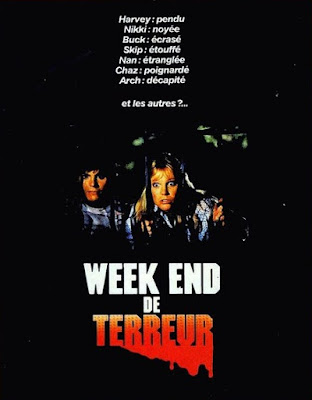 Shot mostly in British Columbia, Canada, there were several alternate endings filmed that ultimately weren't used. Jeff Rovin wrote a novelization based on Danilo Bach's script and Charles Bernstein's (very good) score was released by Varese Sarabande. A God awful pseudo "remake" that's so bad it makes this original look like a masterpiece was released in 2008.