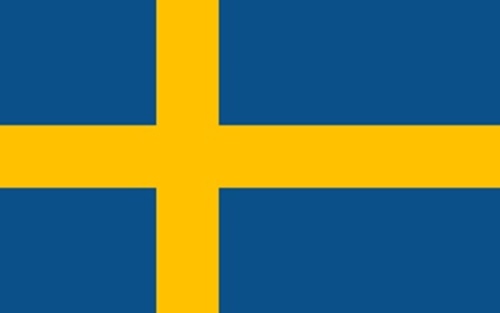 SWEDISH HORROR [1950-1990]
When one thinks of Swedish cinema, Ingmar Bergman is a name that probably immediately comes to mind. As far as horror is concerned, the wonderful Let the Right One In (2008) is probably going to be the first title to roll off most tongues... perhaps the only title to roll off most tongues. That's because most of Sweden's genre films were produced after 2000. An IMDb search for Swedish horror produced from 1890 to 1990 brings up only 28 titles over a hundred year span, which is the most of all the Nordic countries but still just a minor contribution in the grand scheme of things. Comparatively, a horror title search from 1991 to 2020 turns up over 500 films! I guess we have digital video to thank for all of that. Sweden's standout contributions made before 1990 almost exclusively came from the silent era, including Prästänkan / "The Parson's Widow" (1920), an early work from Danish director Carl Theodor Dreyer, who'd later make the French / German Vampyr (1933), and Victor Sjöström's haunting Körkarlen / "The Phantom Carriage" (1928) ▼. Technically one could also throw Häxan (1922) into the mix due to it being a Swedish co-production made with Swedish backing, though it was directed by the Danish Benjamin Christensen, had a Danish cast and crew and was filmed entirely in Denmark.

Almost single-handedly carrying the genre torch for the country for several decades was director Arne Mattsson, who started out his career with comedies and ended up having an international success with One Summer of Happiness (1951), which was controversial upon release due to several nude scenes but received critical attention at the Berlin International Film Festival and Cannes. However, most of Mattsson's subsequent genre films were more mystery / crime that occasionally dipped their toes in the horror genre as opposed to all-out horror. They were quite similar in that regard to the Edgar Wallace 'krimi' adaptations made in Germany at around the same time. Mattsson's first foray into this genre was the five film Hillman series starring Karl-Arne Holmsten and Annalisa Ericson as a married pair of detectives. Perhaps especially noteworthy here is Mannequin in Red (1958), which shares some striking similarities to Bava's influential Blood and Black Lace... only it was made six years earlier. Mattsson also did a 1958 remake of Phantom Carriage, the serial killer film Mask of Murder (1985) starring Rod Taylor and Christopher Lee and a few other titles. He's by far the most prolific Swedish genre director from this time.

Of course Bergman himself couldn't resist infusing many of his grim, heavily symbolic psychological dramas with genre elements... but to the extent where I feel entirely comfortable including most of them here? I go back and forth on this. Should I include The Virgin Spring (1960) due to its obvious impact on the genre, particularly Wes Craven's infamous shocker The Last House on the Left (1972) and all that followed? And could a case also be made that a number of his other titles, like 1958's The Magician and 1976's Face to Face, are at least partially horror?
An interesting BFI article theorizes that Bergman was, in fact, a pioneer of the later folk horror subgenre and obviously just as good a case could be made for him also being a pioneer of psychological horror. Many articles have recently been popping up about his films, their impact of the genre and their continual usage of nightmare imagery and other obvious horror tropes; even one going so far as to dub him "the greatest horror filmmaker in cinema." I'm still considering all of this, but I'll be leaving most of his movies off of here for the time being. Once I revisit them I'll make up my mind on a film-to-film basis. One Bergman movie that's a definite inclusion is Hour of the Wolf (1968), which one critic (I think it was Leonard Maltin) noted was "the closest Bergman ever came to making a horror film" and Rotten Tomatoes dubs "Ingmar Bergman's only horror film." Wolf wasn't well-received upon release, but is much more respected nowadays. 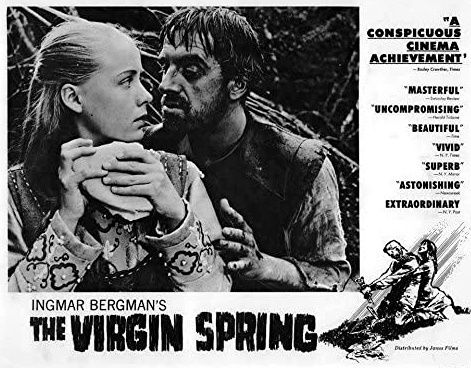 While I've read on more than one occasion that horror films weren't very popular in Sweden during this time, the country certainly wasn't entirely all about atmospheric, classy silent epics and Bergman's heavy, deadly seriously, critically acclaimed art house dramas. Rest assured, they've made their fair share of trash as well! One of their first notable B movies was Virgil W. Vogel's "20 foot tall" alien yeti film Terror in the Midnight Sun (1959), which is a fun enough monster movie granted you avoid the re-cut "Americanized" version from Jerry Warren called Invasion of the Animal People.
Though most of the 60s was dominated by more of the same from both Mattsson and Bergman, a storm was brewing over the horizon with director Vilgot Sjöman. His then hugely controversial 491 (1964), which involved youth criminals being forced to partake in social experiment "therapy," featured more graphic sexual content than what was generally allowed at the time, including depiction of male-male rape and even a scene where a woman gets raped by a dog (!!) Of course this isn't as graphically depicted as what would be filmed later on, but it was plenty to get the film frequently banned and censored back in 1964. Sjöman took that notoriety and ran with it; seemingly intentionally courting controversy along the way. One of his next films was the incest-themed My Sister My Love (1966). Then, in 1967, came I Am Curious (Yellow); which was the real game changer.

Yellow featured full frontal nudity (both male and female) and simulated sex, which immediately got it banned from exhibition numerous places and sometimes prints were even seized by authorities. The film's notoriety in the U.S. turned it into not only one of the highest-grossing films of 1969 but also the all-time highest-grossing foreign-language film up to that time. Though it seems an odd title to single out when discussing horror films, it's not when you see the wave of Euro sexploitation films that followed. Just within the genre, there was Sensuous Sorceress (1970), the filmed-in-London Deviation (1971), The Devil's Playthings (1973) and Dirty Fingers (1973). Bo Arne Vibenius made the most popular one, though, with his revenge film Thriller: A Cruel Picture (1973) ▲, which had loads of nudity, rape, grisly violence (including an eye gouging that reputedly used a real corpse) and sometimes even hardcore sex inserts added. It became an even bigger cult hit once Quentin Tarantino started singing its praises. However, Laslo Benedek's The Night Visitor (1971) starring Bergman regular Max von Sydow is likely the best genre film the country had on offer in the 70s.

The 80s saw a few more highlights, most especially Richard Hobert's TV movie Twelve Months of the Summer (1988) and the 20-minute animated short Exit (1990). I also quite enjoyed Peter Borg's ghost tale Sounds of Silence (1989) though many others seem less impressed with it than I was. Rather randomly, Sweden also decided to get involved in the short-lived 80s "hair band horror" subgenre with the hilariously awful The Bleeder (1983), a SOV cheapie centered around an awful all-female metal band called "Rock Cats," and Blood Tracks (1985), centered around the male glam band "Easy Action." Another title that was a frequent presence in U.S. video stores was Jack Ersgard's haunted house film The Visitors (1988).
Of the many titles released here in recent years, Ari Aster's Midsommar (2018); a U.S. / Swedish co-production set in Sweden but mostly filmed in Hungary, is by far the most popular. Sweden also had their hand in co-producing Lars von Trier's Antichrist (2009) and The House Jack Built (2018), James Watkins' The Woman in Black remake (2012), Rowan Joffe's Before I Go to Sleep (2014) and Jim Jarmusch's disappointing zombie comedy The Dead Don't Die (2019).
__________________________________________________ 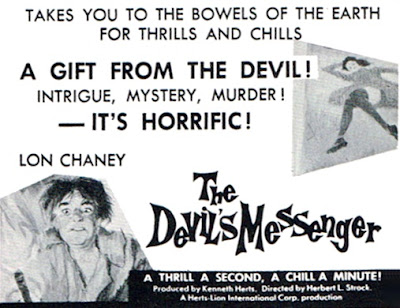 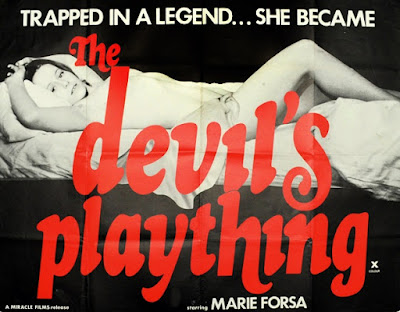 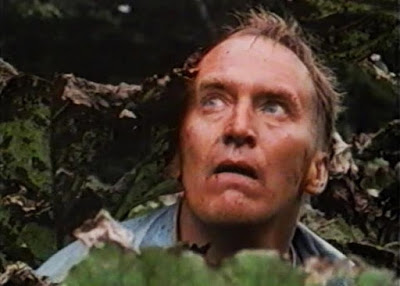 NOTES:
- Some of Mattsson's listed films may be removed once I see them. Thus far I've only seen Mannequin in Red from his early crime cycle, which qualifies. I'm not entirely sure if the rest do.
- The Devil's Messenger (1962) is an anthology utilizing episodes of the short-lived 1959 Swedish TV series 13 Demon Street.
- I've heard I need to take a look at Bergman's The Serpent's Egg (1977) for possible inclusion.
- A mysterious title, Las cuatro noches de la luna llena / "Four Nights of the Full Moon" (1963), has turned up on various movie sites. Supposedly it ran out of money during production and had to be turned into a short that was then screened theatrically. And now it's missing. According to what info has been posted about this online, the director (Sobey Martin) is German, the leading lady (Gene Tierney) is American, most of the supporting cast is Spanish and the producers are Swedish. Bizarre. I'm leaving this off of the main list for the time being.
__________________________________________________
Any additions or comments? Post 'em below.
Posted by The Bloody Pit of Horror at 7:49 PM No comments: