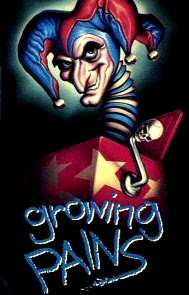 Directed by:
Francis Megahy
*I've decided to include all thirteen episodes from the short-lived TV series "Hammer House of Horror" on this website. There are two reasons for this: 1.) Each episode runs 50 minutes and is in essence a feature (short films technically clock in at less than 45 minutes). 2.) More importantly, in the mid-1980s each episode was released separately on video by the ThrillerVideo label and was further padded with commentary from horror hostess Elvira. Since these were very well distributed titles, and in keeping with the video-store feel of the website, I felt it important to keep these titles in the database and review them all individually.*
Terence Morton (Gary Bond) is an ambitious scientist who spends all his time in the lab experimenting with growth hormones. His wife Laurie (Barbara Kellerman) is a busy diplomat who is away from home much of the time. Even though both possess jobs that ostensibly help ease the suffering of the common man, they have managed to sadly neglect their own son William (Christopher Reilly) in the process. When poor William dies after consuming poison from dad's lab, the couple adopt another boy named James (Matthew Blakstad). Instead of filling any kind of emotional void, James begins acting up almost right from the beginning. Obviously influenced by the characters played by great child actor Martin Stephens in VILLAGE OF THE DAMNED ad THE INNOCENTS, he's overly mannered, wise beyond his years and very manipulative for a boy his age... He also seems to know what happened to their previous son. Either James is somehow in contact with the boy's spirit of he's been possessed. It's kind of difficult to tell but one thing's for sure... he's out to make the parent's life a living hell and wants them to either learn their lesson or join James in the grave. One of the most peculiar episodes in the entire series, this one's a bit too obtuse and hard to follow at times, but there's effectively sustained tension and uneasiness in the household, plus some shocking scenes involving the pet dog and slaughtered white bunny rabbits. The ending is a little disappointing, though.
Score: 5 out of 10
Posted by The Bloody Pit of Horror at 7:52 PM