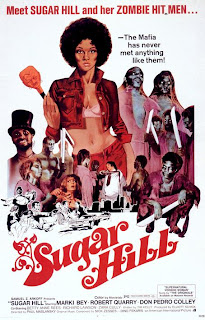 Little-known Marki Bey (whose most high profile part would end up being a six episode stint on the TV series Starsky and Hutch) stars as Diana Hill, an attractive nightclub performer at the voodoo-themed "Club Haiti." Her fiancé Langston (Larry D. Johnson), whose pet name for his girl is Sugar cause she's sweet (... until push comes to shove, at least!), is being pressured by mafioso Morgan (COUNT YORGA star Robert Quarry) to sell his club. Refusing to cave in to their attempts at blackmail, Langston ends up getting beat to death right outside the club by Morgan's thugs. What's a newly widowed foxy lady in a blaxploitation flick to do? Get revenge, of course. Diana/Sugar ventures deep into the swamp to meet up with elderly, white-haired voodoo queen Mama Maitresse (Zara Cully), who in turn calls up ghostly zombie master Baron Samedi (Don Pedro Colley), who in turn calls up a horde of zombie former slaves. Diana and the Baron then lure each of the gangsters to their doom, allowing the living dead to do the dirty work.

Though formulaic, fairly predictable and possibly too tame for some viewers, I found this to be a very entertaining, fun and solidly-made entry in the blaxploitation horror subgenre; at least on par with the much more famous BLACULA (1971). It's well-paced, well-written, nicely photographed, humorous and performed with gusto by the cast. Bey gives a strong, animated, authoratative performance in the lead role and gets a few bad-ass one-liners as she dispatches her prey, and crazy-eyed Colley's wonderfully enthusiastic, over-the-top turn as the zombie master is a standout. Horror star Quarry is just fine as the heavy, though the role is less showy than some of the others. There's also fine work from Cully, Betty Anne Rees (who acted alongside Quarry in DEATHMASTER a few years earlier) as a nasty, racist gangster's moll and Charles P. Robinson as the sole black member of Quarry's thugs (Uncle Tom if you will). The cast also includes Richard Lawson (from SCREAM BLACULA SCREAM and POLTERGEIST) as a detective.

Exploitation fans should be forewarned that the film contains no sex or nudity and it is light on blood and gore, though it's often crude (language-wise) and sufficiently violent (...a man is fed to hungry pigs, another has his throat cut, there's a quicksand drowning, etc.) The dusty, cobweb-covered zombies are pretty interesting-looking, particularly their large silver eyes, which look pretty ominous when caught in the light. There's even a catchy theme song ("Supernatural Voodoo Woman" by The Originals).

Samuel Z. Arkoff was the executive producer and it was released theatrically through AIP. The VHS title was THE ZOMBIES OF SUGAR HILL. A good quality print crops up occasionally on TV and can be seen via Netflix, though from what I've heard, the DVD being sold on amazon is a terrible print.