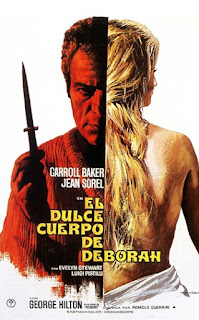 
Only very forgiving giallo addicts are going to want to swill this perfumed toilet water. Tranquilizer-popping, possibly unstable American Deborah (Carroll Baker) and her hunky new hubby Marcel (Jean Sorel) decide to take their honeymoon in Geneva, Switzerland so she can see where he grew up and learn as much about him as possible. Well, more like learn something about him as the two don't seem to know each other all that well. Everything is going fine (at least as far as sex and nice scenery are concerned) until they decide to go to a nightclub to watch a black dancer strip down to a g-string and Marcel runs into an old buddy of his. The friend, Philippe (Luigi Pistilli), glares at him, gives him the cold shoulder and turns right around and leaves as soon as her spots Marcel. Marcel chases him down only to have Philippe brand him a murderer; accusing him of killing his former girlfriend Suzanne prior to running off to the U.S. Philippe insinuates he murdered her, though the death is on the book as a suicide. Deborah overhears the entire conversation and, later on, presses Marcel to provide an explanation. That he does and a long flashback follows.

Prior to going to America, Marcel, who'd fallen on some hard times, fell in love with the well-to-do Suzanne Boileau (“Evelyn Stewart” / Ida Galli). Because some thugs he owed money to were beating him and threatening his life on a regular basis, Marcel had Suzanne swipe some money from her loaded parents to pay them off. Wanting to better himself (and pay them back), he then decided to go to America and stay with some friends in Boston until he could get back on his feet and provide better for their future. He promised Suzanne he'd write her every day and that he'd soon return to her, but that all changed once he met Deborah and fell in love with her. Supposedly the heartbroken Suzanne then committed suicide in his absence. Philippe is bitter because he was also in love with Suzanne and perhaps now wants revenge.

Now wanting to find out exactly what happened, Marcel goes to visit Suzanne's parents only to find the house has been abandoned long ago. When they go inside, they find a lit cigarette with lipstick on it and hear someone playing the piano but no one is to be found. A phone rings and the voice on the other end threatens Deborah; claiming they're going to kill her to punish Marcel for what he's done. A later call to the phone company reveals the phone at the villa was disconnected over a year ago. Never mind all of that, the lovey dovey duo have a plane to catch to Nice, France. Upon arrival, they rent a huge orange villa out in the country for a week and then many little things occur that give Marcel the impression that they didn't leave their troubles behind back in Geneva. Suzanne's favorite song ends up in their stack of records, Marcel thinks he sees Philippe at a boxing match and the strange phone calls begin again...

A lame and utterly forgettable thriller, Deborah is slow-moving, almost offensively empty and vapid and completely devoid of thrills and suspense. This has to be one of the weakest, most bland scripts ever penned by the prolific Ernesto Gastaldi. The dialogue is awful, the one-dimensional characters function as little more than mannequins to adorn with fine late 60s fashions and things plod along from one boring non-event to another until the very end when it unleashes a few customary "surprises." Sadly, the last minute plot twists are all incredibly lame and predictable (gee, a 300 thousand dollar life insurance policy... who'd have ever guessed!) and come way too late in the game to salvage this, anyway.

The only thrills this attempts to generate are of the erotic kind. However, since this was made during a big transitional period in world cinema when censorship was just starting to erode, the scenes are all extremely tame. We're talking close-up shots of arms, legs and shoulders and barely discernible “nude” scenes shot through foggy shower doors. In other words, there is no real nudity from the stars (at least not in the 92 minute version I viewed) despite about a half dozen “love” scenes. Instead, we get long sequences of the two leads kissing, hugging, lying in bed with strategically draped blankets wrapped around them and pawing at each other while spouting laughably insipid “romantic” dialogue (“You're so delicious... and I'm always so hungry.”) Often resembling a feature-length perfume commercial (perhaps a better alternate title would have been “Eau de Giallo”), the print ads pretty much sold the entire film on the (bare) backs of the hot lead couple. Alas, it takes more than a few pretty faces to make something worth watching. 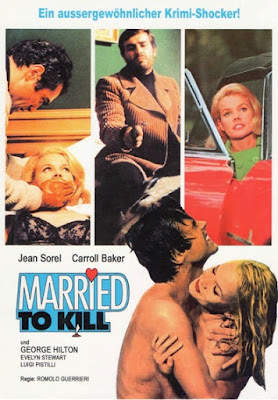 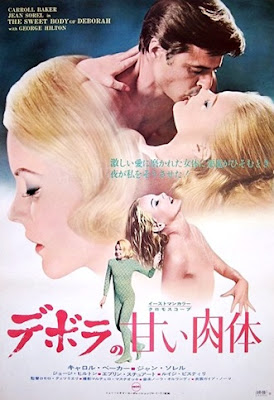 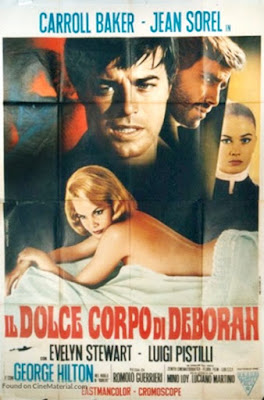 I love Baker in certain roles (like her brilliant turn in Andy Warhol's Bad) but, let's face it, when the woman is bad, she is really bad. In the English version, the actress dubbed her own voice (I believe several of the other main actors did as well) and, despite being in her mid-30s when this was filmed, usually sounds like a frail old lady. Her voice cracks, warbles and completely lacks inflection and she often awkwardly breaks and pauses between words as if trying to sync her dub to her lips. She does however look great and some of her clothing choices are pretty hilarious. During one scene, she cuts it loose in a comic book-themed nightclub (“Kaboom!”) decked out in Christmas bulb earrings and bracelets. In another, she plays Twister on the front lawn while dressed in a lime green mesh onesie. Oh, the late 60s. Gotta love 'em. 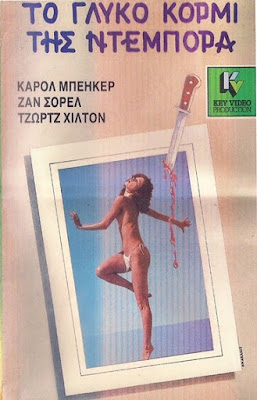 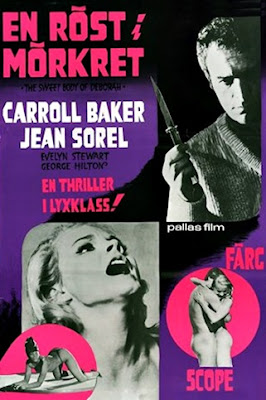 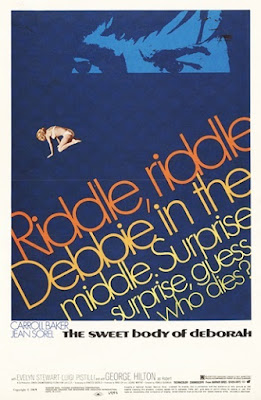 Genre regular George Hilton is in this one, too, playing a voyeuristic painter named Robert. Born in Uruguay, the handsome Hilton started acting in Argentina but quickly relocated to Europe so that he could actually have a career. He was far better suited for the spaghetti westerns he was frequently cast in than suspense thrillers and horror, but found himself cast in numerous early 70s gialli anyway; usually ones also produced by Luciano Martino and directed by Luciano's brother Sergio Martino (who was one of the production managers on this one). In most of those films Hilton came off as incredibly bland and one-note, but he's a bit more animated and less wooden here despite the film itself being worse than his later efforts. 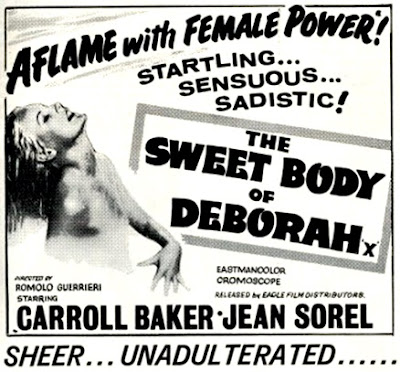 This French / Italian production was given a U.S. theatrical release in 1969 by Warner Brothers / Seven Arts but was never officially issued here on home video. Italy (on the Nocturno label), Greece (Key Video), Hungary (Mokep), Brazil (Mac) and Spain (CJ) all received VHS releases, while Italy, Sweden and Japan have gotten DVDs. The director was born under the name Romolo Girolami and is the brother of director Marino Girolami and uncle of director Enzo G. Castellari and actor Ennio Girolami. He also made the giallo The Double (1971) and a number of westerns.