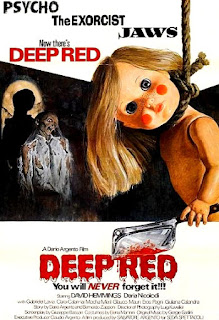 
Lithuanian psychic Helga Ulmann (Macha Meril) appears at a paranormal presentation taking place in Rome. After she gives a brief demonstration of her powers, she's overcome with feelings of terror as she sees visions of a child singing, blood and death. There's a murderer in the audience. Through her visions, Helga also believes she can identify the psycho. She returns home to gather her thoughts and write down her visions for the police but doesn't get a chance to give anything to them. The psycho has found her. He / she breaks in, murders her with a hatchet and takes her papers. While that's going on, British jazz musician Marcus Daly (David Hemmings) is heading home after a long night of practicing for an upcoming show. He hears Helga's scream and sees the very end of her murderer thought a window, which includes in the usual Argento head-crashes-through-glass climax. Marcus manages to catch a brief glimpse of the raincoat-clad killer running away plus believes the killer stole a painting from the house.

After going through the paces with the police, who naturally question his recollections about the evening's event, Marcus finds himself “fascinated by the whole event” and starts looking into matters all on his own. He gets in way over his head in the process... especially when the killer shows up at his apartment looking for him. Giving him an additional headache is the presence of journalist Gianna Brezzi (Daria Nicolodi), an annoying combination of nosy, overly-peppy journalist and pseudo feminist. She'd like to work with Marcus but, after bruising his ego beating him at arm wrestling, he passes. As a retort, she threatens to start her own parallel investigation and does just that, though the two eventually decide to start helping each other out.

Other characters flutter in and out of the main story, including Marcus' friend and fellow musician Carlo (Gabriele Lavia), a depressed gay drunk with a transsexual lover who tries to discourage Marcus from sticking his nose into the investigation and suggest he leave town, as well as Carlo's kooky mother Marta (Clara Calamai), a former movie star forced to quit the business by her controlling husband. And then there's Professor Giordani (Glauco Mauri), a psychiatrist with an interest in parapsychology who was “keeping” Helga and eventually helps in the investigation, much to his detriment. Children's book author Amanda Righetti (Giuliana Calandra) had written a book that may have inspired the killer. Bardi (Piero Mazzinghi), the caretaker of a certain spooky decaying mansion has an imbalanced daughter named Olga (Nicoletta Elmi) who gets her kicks torturing lizards.

Clues lead Marcus first to a haunting children's song he hears being played when the killer shows up at his place, which then leads to a book on urban legends and folklore, which then leads to an abandoned house that used to be the home of a German ghost story writer who'd long since passed away, which then leads to a school housing some important drawings. As Marcus tries to piece the clues together and avoid being killed himself, a number of the supporting characters get bumped off in gruesome ways that involve a face seriously scalded by hot water, a head getting squashed by a car, decapitation via elevator and some major dental damage after an open mouth is slammed into a mantle and desk, plus a few garden variety stabbings. (The alternate title The Hatchet Murders is a bit misleading as there's actually only one murder by hatchet and the butcher knife used isn't even called a hatchet here in America.)

Profondo rosso is generally considered one of the director's finest films and it's easy to see why. This ably combines an engrossing mystery plot with bloody and elaborately staged murder sequences and has a better screenplay and slightly more developed characters (including a male lead who acts human for a change and exhibits fear and confusion in the proper places) than his usual, plus a unique and memorable (albeit sometimes grating) music score from Giorgio Gaslini and Goblin. Though there's some clunker dialogue (“There's somebody in the house...g...uh... a-absolutely trying to kill me, ya know?”) and it lags a bit here and there, it more than makes up for that with impressive horror / suspense set pieces, which are stylish, imaginatively shot, sometimes pretty startling (two words: creepy doll) and range from good to downright brilliant.

Argento fans will eat up the various camera shots, the fact the camera seldom stays put and odd camera placements throughout, which include several long close-up shots prowling around a table looking at various objects, low level POV shots gliding along the floor, a shot titling into a spinning record album, a shot following a blade down into a victim and an exterior crane shot of a house. The cinematographer was Luigi Kuveiller, who'd previously shot those sleazy, campy Andy Warhol-produced adaptations of Dracula and Frankenstein. 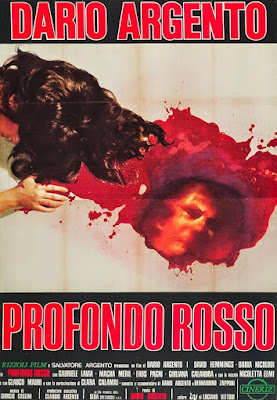 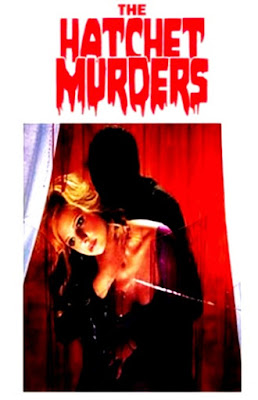 Originally conceived as La tigre dai denti a sciabola (“The Sabre-Toothed Tiger”), this started life as a 500 page (!) script written by Argento, which was then whittled down to around 320 pages with help from Bernardino Zapponi. After shooting was complete, the full running time clocked in at 126 minutes, which isn't hard to believe knowing Argento very well could have spent 30 pages describing a single elaborate camera shot. 126 minutes was deemed too long by many distributors, so it was cut considerably in certain markets. Many feel the 105 minute version actually flows best, as it removes most of the dialogue that has no real bearing on the plot (notably excessive playful banter between Hemmings and Nicolodi) yet retains the gorier moments provided by makeup artists Germano Natali and Carlo Rambaldi.


Having previously seen only the hacked up U.S. version, what I ended up watching this time was the 126 minute version and several scenes really do feel unnecessary and / or go on for too a bit long. While I liked some of the Hemmings / Nicolodi scenes, I certainly wouldn't miss any of the scenes with the dumb police superintendent (Eros Pagni). 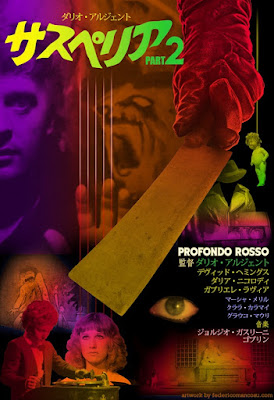 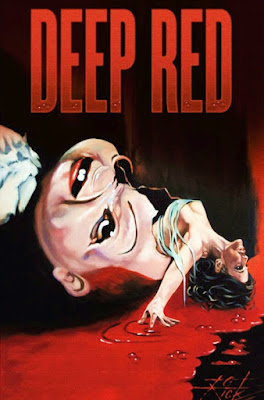 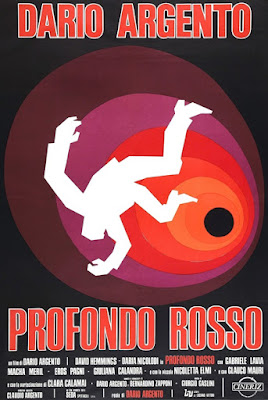 After Argento's follow-up Suspiria (1977) hit it big, Deep Red saw a re-release in numerous countries and was even re-titled Suspiria 2 in several places, like Japan. Argento himself oversaw the R-rated reduced cut that was released theatrically here in America and elsewhere. Because over 20 minutes of footage was removed prior to the film being dubbed into English, later DVD / BR releases from distributors like Anchor Bay and Blue Underground present an “uncut version” that's mostly been dubbed in English but with bits of dialogue here and there in Italian.