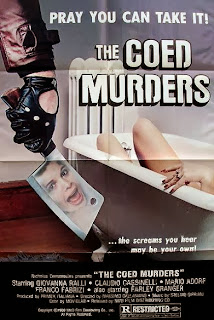 
Originally, blandly titled La polizia chiede aiuto ("The Police Want Help"), this middle-of-the-pack giallo / poliziottesco (police procedural) was released stateside under the title The Coed Murders. (Great poster, huh?) It was also titled What Have They Done to Your Daughters? at one point specifically to recall director Dallamano's slightly better-known What Have You Done to Solange? (1971). Both films fall into the then-popular 'troubled schoolgirl' sub-category, which were made pretty much for audiences to thrill at the prospect of underage girls (well, older actresses pretending to be them, at least) being sexualized and murdered. When compared to, say, the Dallamano-co-scripted Enigma rosso aka Trauma from a few years later, which featured a tasteful plot-line involving young girls being dildo-raped to death, or even the aforementioned Solange, which involved young girls being stabbed to death in the vagina, this seems much more tame and classy. The gore, violence and nudity are fairly minimal in this one and, though there's some pretty crude dialogue describing the seedier aspects of the story, most of the time is spent on the police investigation.

One thing hoping to separate this from the pack is its casting of Giovanna Ralli as assistant district attorney Vittoria Stori. Since the detectives in these films from this time were almost always male, it was somewhat novel (at least in concept) to have a female leading up the investigation. Unfortunately, the execution sadly downplays this angle. Nearly every character on the male-dominated police force doubts her capabilities at doing her job simply because she happens to be female, her gender is constantly addressed and everyone acts like it's big of her to be able to enter a crime scene with a dead body present and not faint or something. Now this would have been OK if the film had not made such a big fuss about her gender to begin with or if Vittoria had been allowed to be the heroine or otherwise prove her worth, but the writing strictly forbids her from becoming a brave Jodie Foster-in-The Silence of the Lambs type. And when all is said and done, she herself is eventually reduced to the 'victim' role; cowering in the corner and having to be rescued by a man. Afterward she's all but pushed off to the side so that the male inspectors can take over the heavy lifting. It's also worth noting that Vittoria's contributions to cracking the case become less important as the film progresses.

Things begin with the discovery of the nude, dead body of 15-year-old Silvia Polvesi ("Cheryl Lee" / Sherry  Buchanan) found hanging in a sublet attic apartment. Forensics reports uncover that she was murdered prior to being hung. The same reports conclude that she was something of a whore and had traces of semen found in every orifice except her nostrils. A team of detectives - led by Claudio Cassinelli as Inspector Silvestri - hit the city and start to piece the clues together. They first interview Silvia's parents. Farley Granger plays the neglectful father in a small, why'd-he-even-bother role. The mom (Marina Berti) relates a hilarious flashback where she finds her daughter's birth control pills and confronts her while she's topless in the bathroom. ("Sure, I know I'm still a child but I'd rather not have a kid every nine months!") From there, they interview Silvia's shady psychiatrist Dr. Beltrame (Steffen Zacharias), peeping tom Bruno Paglia (Franco Fabrizi), who'd been snapping pictures of Silvia having sex from a building across the street from where her body was found, a bunch of secretive schoolgirls and others.

A private detective who followed Silvia around for a few days is later found dismembered in the trunk of a car and the killer - who's clad in a leather outfit and motorcycle helmet and carries around a hilariously huge meat cleaver - goes after the detective's mistress Rosa (Micaela Pignatelli) in the hospital because she has some incriminating audio recordings, as well as anyone else who threatens to uncover what's going on. The motive? Well, it has something to do with a bunch of old perverts and a teenage prostitution racket. Nothing new there.

This is all pretty by-the-numbers stuff. Lots of characters, lots of red herrings, lots of silly dialogue (upon entering a bloody crime scene, the chief inspector notes "That's two dead now... always assuming that this isn't chicken blood.") and a very typical and very Italian score (a bunch of young girls going "Nah nah... nah nah... nah nah!" over and over again) by Stelvio Cipriani. Watchable? Sure. It's reasonably well-made, has pretty good acting and production values and some neat camera placements (like behind the handlebars of a speeding motorcycle). A few of the suspense scenes are good, especially one where Vittoria is pursued through a parking garage, as are a couple of gory moments (like a policeman's hand getting hacked off). Sadly, none of that is enough to overcome a general lack of creativity. Since nothing memorable or even remotely original happens, this probably would have benefited from being sleazier than it actually is. I'm also still trying to figure out why it was acceptable to play audio recordings of underage girls being coerced into anal sex by nasty old men but the "fuck" in "Go fuck yourself" had to be bleeped out to protect our sensitive ears.

Giallo regular Mario Adorf (The Bird with the Crystal Plumage [1970], Short Night of the Glass Dolls [1971], etc.) co-stars as a detective whose teen daughter is also involved. Dallamano also made the interesting Dorian Gray (1970) and The Night Child (1975).