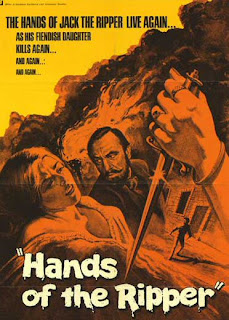 Directed by:
Peter Sasdy
Orphaned teenager Anna (a well-cast and innocent-looking Angharad Rees) is placed under the care of the awful Mrs. Golding (Dora Bryan), a phony medium who uses her in moneymaking schemes and pimps her out to customers, which eventually leads to the old crone's deserved murder. Anna is adopted by compassionate Dr. John Pritchard (Eric Porter), an early follower of Freudian philosophy, who becomes captivated by the young beauty and wants to help. Pritchard soon discovers that Anna is the daughter of legendary slasher Jack the Ripper and may have somehow developed homicidal tendencies of her own after seeing dear old dad murder mum as a child (shown in an effective opening sequence). Charitable good intentions eventually lead to tragedy, as Pritchard finds himself obsessed with finding a cure for the troubled girl; even going as far as covering up a string of grisly murders he thinks Anna might be responsible for. The performances are first-rate (particularly Porter, who backed out of the lead role in DEMONS OF THE MIND so he could play this part instead), the turn-of-the-century London flavor is evocatively, effectively captured, the murders (heavily trimmed for the TV showings) are pretty bloody for the time and there's a great, subdued ending at the "Gallery of Whispers." Fine period horror from Hammer Studios, which was originally shown on a double bill with TWINS OF EVIL. Jane Merrow, Keith Bell, Derek Godfrey, Katya Wyeth and Norman Bird round out the supporting cast.
★★★
Posted by The Bloody Pit of Horror at 11:47 AM