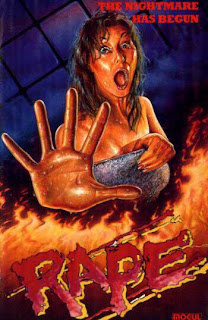 Directed by:
Miguel Iglesias
Misleadingly packaged and re-titled for the Mogul video release here in America, this slow, atrociously-dubbed Spanish supernatural tale is a bad combination of dull and muddled. In Paris, an otherwise wealthy man named Jean Dupre passes away under mysterious circumstances. No one, not even a doctor, can figure out why he died, but ghostly shadows showing up in some photographs prompt a couple of his friends to do their own investigating. Roger ("Rick Joss"/ Ramiro Oliveros), a psychiatrist, and Frank (Gil Vidal), a reporter and photographer, decide to head to the same Spanish village Jean visited right before he passed away. There, they encounter superstitious townspeople who don't seem to want to discuss their friend. They also learn that Jean had been running around with a beautiful young woman named Maria (Nadiuska) who was rumored to be a witch who casts an "evil eye" over men. Maria and her father Gabriel (Luis Induni) were driven out of town.
Through hints given to them by bartender Marcelino (Alfred Lucchetti) and Dr. Morin, the men are finally able to locate Maria and Gabriel living high up in the mountains in a cabin. From there on a strange and very confused tale of possession unfolds. Maria's subconscious seems to strike out at any man who gets sexually aggressive with her, leading to madness and death. Maria also has telekinetic abilities and is able to heal the sick with just a touch. When a photo is taken of her former home, ancient Aztec symbols that aren't really there show up on the walls. When a second photo is taken of a nude Maria bathing in a stream, they come back distorted.
Thankfully, Roger knows all about paranormal phenomenon and hypnosis so he's able to put the pouty beauty under and reveal that in a past life she was actually "The Princess of Moctezuma." We even get some incredibly clumsy and unconvincing Aztec flashbacks where the Princess' village is attacked, she's captured by the enemy and ends up falling in love with a white soldier. Strangely, none of that sheds light on what's going on in the present day. I wasn't sure if Maria was possessed, reincarnated, cursed or just able to act out on her subconscious because of her Aztec blood line, though no information is given about Aztec customs or rites to help us get a handle on it. For some reason Maria has an irrational fear of fire, yet the flashbacks don't give any reason for it. I also didn't really understand why a nice Princess would want to kill horny, pushy guys, but whatever. The mumbo jumbo is layed on way too thick and heavy here.
The original Spanish title translates to something like "Naked Concern," but here in the states they just lay it all out there and call it RAPE. Can't say that I blame them. If they couldn't play up on the one stray tasteless moment in the film (where Gabriel tries to molest his supposed "daughter") this would have otherwise been a hard sell. Nadiuska (a German-born model and actress very popular in Europe at the time) provides some T&A, but based on some screen caps I've seen from the uncut version, the full frontals have all been removed. Violence? What violence?! Not that I necessarily need every film to be a bloodbath, but it certainly would have helped perk this murky bore up a little bit.
Gaspar 'Indio' Gonzales and Fernando Ulloa both have small roles here. Director Iglesias (who used the name "M.I. Bonns" here) had previously made the werewolf vs. yeti Paul Naschy vehicle NIGHT OF THE HOWLING BEAST (1975).
★1/2
Posted by The Bloody Pit of Horror at 2:28 AM No comments: