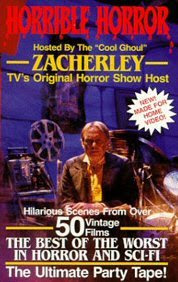 Directed by:
David Bergman
Former TV horror host John Zacherle (who also put in appearances in several films) hosts this collection of movie clips from a dusty, cluttered dungeon set and interrupts the proceedings far too often. Most of the titles covered in this long tape (110 minute) are from the 1930s through the 60s. Included are trailers (THE ALLIGATOR PEOPLE, I WAS A TEENAGE WEREWOLF, ATTACK OF THE PUPPET PEOPLE), fun rare bloopers from ABBOTT AND COSTELLO horror comedies, TV serials like THE UNDERSEA KINGDOM, SUPERMAN and CAPTAIN VIDEO, some hilarious William Castle gimmicks like the 3-D 13 GHOSTS and "death by fright" insurance policies for MACABRE and THE SCREAMING SKULL, a special section for Lugosi movies (DRACULA, GLEN OR GLENDA?, BRIDE OF THE MONSTER and more), plus some rare and fun Lugosi interviews and great scenes from KING OF THE ZOMBIES with the hilarious Mantan Moreland.

My favorite trailer was for THE KILLER SHREWS, where a serious-sounding on-screen narrator informs us, "There have been recent sightings of giant killer shrews in Alaska!" Toward the end things are divided up by genre such as zombies (CARNIVAL OF SOULS, NIGHT OF THE LIVING DEAD) and vampires (THE VAMPIRE'S COFFIN, THE VAMPIRE BAT). Also with SHE-DEMONS, THE BRAINIAC, WAR OF THE COLOSSAL BEAST, THE BLOB (in color), HOUSE ON HAUNTED HILL, SPIDER BABY and many others. As you can tell, many of the titles covered do not fall into the category of "horrible horror."
★★1/2
Posted by The Bloody Pit of Horror at 4:00 AM

Email ThisBlogThis!Share to TwitterShare to FacebookShare to Pinterest
Labels: compilation