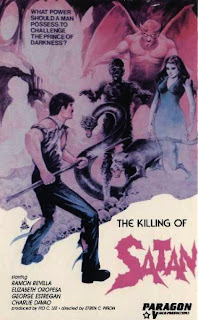 ...aka: Furia de satan, Le
...aka: Killing of Satan, The
Directed by:
Efren C. Piñon
Orlando San Miguel (Ramon Revilla), or just Lando to his homies, is your average mustachioed, middle-aged ex-con whose associations with the criminal underworld are about to bite him in the ass. A few armed thugs show up at his doorstep and during a gunfight, both Lando and his young son are shot dead. Strangely, Lando's bullet wound heals itself and he's resurrected without a stratch. It has something to do with his Uncle Miguel, a powerful, God-fearing sorcerer who lives on an island far, far away and sacrificed himself so that Lando can redeem himself. Lando, along with his wife Laura (Elizabeth Oropesa) and teen daughter Betty are taking a boat ride when a force draws them directly to the island. Once they arrive, they learn there's a struggle between the good, peaceful villagers and a rival island of cave-dwelling bad guys led by the red-caped "Prince of Magic." Lando's dormant telepathic powers are awaken during a watery encounter with his Uncle's corpse and he must now use them when his niece Luisa (Cecille Castillo) and his daughter are kidnapped.
.
Along with a cousin named Ben, Lando travels to the evil island for a series of weird adventures that involve everything from jumping cobras to evil dwarves to seductive female shapeshifters who can transform into various animals to and other strange otherworldly creatures. Sometimes telepathy is employed in the fights (employing cheap-looking sonar fx) and sometimes it's just your standard hand-to-hand combat. The whole thing follows a simplistic good vs. evil/God vs. Satan template. Yes, all of the baddies are all in cohorts with Satan, but now that Lando is on the right path he discovers that God on his side. In fact, he literally does have God on his side and gets to consult with him before taking on the Prince of the Darkness himself! Satan (Charlie Davao) first appears as a red-painted guy in a red spandex outfit with a mustache, a trident and forked tail before changing into a horned guy in a black suit. And for some reason he wants Lando's whiny daughter to be his bride.
.
This simple-headed morality fable might have been a decent little juvenile adventure for kids if not for some nudity (Lando's daughter is thrown into an electric cage full of nude women), some gore (including a guy getting a huge chunk torn out of his face and another smashed with a boulder) and some animal cruelty (real snakes are smashed, burned and thrown around). As for most adults, well you just need to be that special kind of viewer who likes to sit back and laugh at cut-rate production values, awful dialogue, lame special effects and bad acting. If that's what you like, you'll probably love what this one delivers.
.
There were many horror films being produced in the Philippines during the 60s, 70s and 80s, but almost none of them (aside from the ones that were financed by other countries and filmed there specifically because it's cheap) received a release outside of Asia. This is one of the few that was. An English-dubbed version was released through Paragon Video Productions.
★★
Posted by The Bloody Pit of Horror at 11:22 PM 2 comments: