Some Other Stuff I've Written

In addition to keeping this place up, with is basically a full-time job in addition to my other full-time job (why can't I just win the lotto already?), I often get asked to do a number of other things because of this blog. These include attending film premieres in California that I don't have the time to go to, reviewing screener copies of recent independent horror films that I (sadly) often don't have time to review and working on films in various capacities that I can't work on because I can't be away from that pesky other full-time job to fly to wherever to work on said film. Even though I'm grateful for any and all offers and opportunities I've been given, for the time being I can't really leave where I am for too long a period of time.

However, one thing I always make time for is writing because I can do that right here at home in between that regular, keeping-my-life-going stuff. When I'm not writing here, I may be writing for someone or something else. I always enjoy collaborating with other genre aficionados / writers on various projects and have been fortunate enough to be given the opportunity to contribute to numerous magazines, websites and books over the years, which is something I love to do and hope to continue to do. Below are just some of the books I've contributed to, as well as links to the pages where they can be purchased. There are at least half a dozen others pending release as I write this. I'll keep this updated when /if those in the pending section are released. 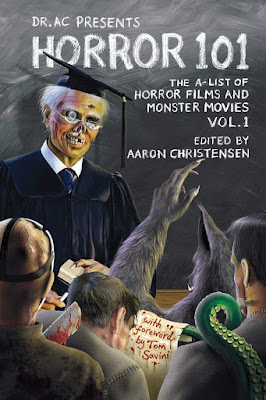 Product Description: "I Like Horror Movies." If you've ever uttered the above four words (which you undoubtedly have, otherwise you wouldn't be reading this) to another person, then you are well acquainted with "the look" that follows. The look comes in three varieties: Look #1: Shock, dismay, confusion, usually accompanied by the word, "Why?" Look #2: Mild interest. "Really? What's your favorite one?" Look #3: Euphoria, followed by "Gooble gobble, gooble gobble, one of us, one of us..." Herein, you will find nothing but #3's, right down the line. Welcome home, fellow fiend. The A-List of Horror Films and Monster Movies. 320 pages with 122 photos from 110 films covered in 101 essays by 78 horror fans from 12 different countries.

Critical Consensus: "Bringing a refreshingly egalitarian approach to the subject, Horror 101 collects musings on our favorite chillers not by the expected assortment of critics and filmmakers, but the audience... the fans themselves. Young and old, male and female, located all over the globe. From Alien through The Wicker Man, each entry brings a breath of fresh air to the consideration of seminal movies many of us thought had been analyzed to death. As editor Aaron Christensen puts it, "Keep America strong! Watch more monster movies!" - JOE DANTE, director of The Howling, Piranha, Gremlins

"These are not just fanboys that like their gore and monsters; rather they are passionate folks who give great insight to all things horror and the macabre." - TIFFANY SHEPIS, star of Tromeo & Juliet, The Hazing, Nightmare Man 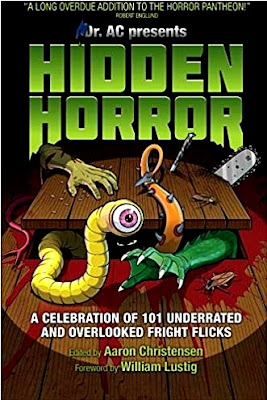 Product Description: Dr. AC is back, with a brand new compendium of essays from the brightest and bloodiest aficionados around the globe. 101 informed enthusiasts pay homage to their favorite overlooked creature features, moldy oldies and trashy treats, showcasing silent classics (The Man Who Laughs, The Hands of Orlac) and trippy mind-benders (Possession, The Tenant), schlocky shockers (The Gore Gore Girls, The Horror of Party Beach) and foreign freakouts (Ichi the Killer, Santa Sangre). You’ll be combing your queue and video shelves to track down every last one! Discover the Horror…HIDDEN HORROR.

Critical Consensus: "Pay no attention to that Dr. AC behind the curtain! Actually, do pay attention, as he and his creepy cohorts pull it back to reveal gem after hidden horror gem.  This is definitely a case where, once you read about it, you'll be DYING to see it!" - SVENGOOLIE

"A long overdue addition to the horror pantheon" - ROBERT ENGLUND

"A wild, insightful and esoteric mélange of macabre movie musings, penned by some of genre journalism's most interesting individuals." - FANGORIA

"Hidden Horror is precisely the sort of book that passionate and informed horror geeks should be reading...and writing!" - FEARNET

"An indispensable resource for inquisitive chill seekers, those new to the genre as well as jaded veterans..." - DREAD CENTRAL

Winner: "Book of the Year" at the The Rondo Hatton Classic Horror Awards (2013). 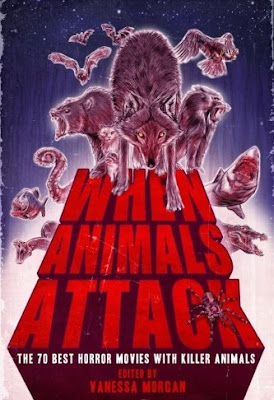 Product Description: The definitive horror movie guide for fans of killer animals and “revenge of nature” films. When Animals Attack: The 70 Best Horror Movies with Killer Animals provides a fascinating and entertaining insight into the cinematographic world of animals on the rampage. From well-known predators such as sharks and lions to unusual killing machines like turkeys, elephants, frogs, cats, and rabbits, there is no shortage of the species on display in this book. Leading horror writers and filmmakers present their favorite “animals attack” films through in-depth essays. Some of the films are touching, some are repulsive, and some are just plain silly. Not all of these horror movies line up with the critical consensus, yet they have one thing in common: they have made the heart of the writer beat faster with excitement.

"When Animals Attack is a huge win for me, and I recommend it to anyone who enjoys creature-features involving animals. Whether you are new to the genre or an existing fan, this book offers something for everybody." - SHATTERED RAVINGS

"Everything from the cover to the list of movies covered in this book is solid." - THE OVERLOOK THEATER

"The essays are written in different styles and take various approaches that reflect the individual authors. It makes for both informative and entertaining reading and will be a useful reference volume for those seeking something new to watch in this sub-genre -- or for those who value being reminded of a piece of animalistic cinema they'd forgotten. You may even learn something new about your favorite animal-attack epic." - ROBERT HOOD, author of Fragments of a Broken Land and Peripheral Visions

- Terror Trivia (2014) - I contributed some horror movie trivia to this book; the brainchild of Chicago-based Aaron "Dr. AC" Christensen.

- Untitled Horror Guide (2015) - This is a very big project / undertaking here that may take awhile to actually complete and release. It's an all-around guide meant to rival the exhaustive Overlook Encyclopedia in coverage. I contributed quite a few capsule reviews to this project back in 2015. This was started by Italian filmmaker / writer Massimo Lavagnini (Fatal Frames; Sick-o-pathics), who sadly passed away, and continued by his colleague Antonio Gragnianello.

- Untitled Evil Kids book (2020) - Just recently finished up a bunch of reviews for this upcoming book from writer / editor Vanessa Howard. This will again be released by Moonlight Creek Publishing out of Belgium like When Animals Attack.

- Ultimate 80s Horror Movie Guide, Volumes 1-4 (2021-22 targeted release date) - Another huge project going on here covering the genre through the entire decade of the 80s. I'm the main writer and editor of this one (my first time out here so wish me luck!). Tentative release date is late 2021 or early 2020. Seeing how so many films are being covered here, the series will be broken up into four volumes.

Posted by The Bloody Pit of Horror at 5:10 PM