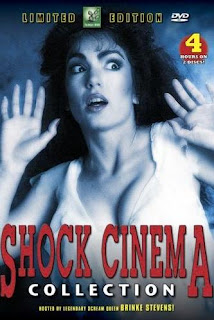 ...aka: Shock Cinema
...aka: Shock Cinema, Vol. 1
Directed by:
Robert Hayes
The popularity of home video was reaching its zenith when this documentary was released, so it was the right time to finally hear from some of the directors, writers and producers actually making all of those low budget horror/exploitation films. Unfortunately, this is little more than a 'talking head' piece that's unlikely to be of interest to many people out there... even someone like me... who loves movie trivia and hearing all about the behind-the-scenes goings on of even cheap, bad and/or obscure genre films. So what's the problem? I would say it boils down to three things. First, the film lacks titles at any point aside from the opening and closing credits. All of the interview subjects are briefly introduced at the very beginning (via narration) and as it cuts back-and-forth between them it's difficult to remember exactly who is who. Another problem is that although the film does try to loosely structure the interview snippets, it's still as shapeless as soup. Third, there are no trailers, no film clips and the only narration is at the very beginning. This is simply an hour of people sitting in front of a camera talking about their careers and that just grows tiresome.
.
One aspect they did get right is gathering together the right people. Charles Band, as head of Empire Pictures and then Full Moon, is undoubtedly one of the most crucial horror filmmakers and distributors of the video revolution. Then we have prolific filmmakers such as former taxidermist and grocery bagger Fred Olen Ray, whose own company American Independent Pictures was responsible for some popular B-movie titles during its day (HOLLYWOOD CHAINSAW HOOKERS, anyone?), and David DeCoteau, who discusses getting his big break on the Corman production GALAXY OF TERROR and then his first chance to direct from the Band-financed DREAMANIAC (1986) five years later. Jeff Burr discusses his 1986 debut THE OFFSPRING, as well as the butchering of LEATHERFACE: TEXAS CHAINSAW MASSACRE III ("New Line has utter contempt for the genre"), while Scott Spiegel talks about his work on EVIL DEAD 2 (1987) and his slasher INTRUDER (1988).
.
We also hear from the likes of writer/director C. Courtney Joyner (Burr's former college roommate, who calls a slasher film he wrote - NIGHT SCREAMS (1987) - "awful"), Christopher Roth (who edited KILLER KLOWNS FROM OUTER SPACE and many FOR films), Ernest D. Farino (a very talented title maker and fx artist, who also sometimes directs and also animated the Pillsbury Doughboy) and lesser-knowns such as Daniel M. Peterson (director of VAMPIRE KNIGHTS and GIRLFRIEND FROM HELL), J.R. Bookwalter (THE DEAD NEXT DOOR) and Mark Thomas McGee (EQUINOX). So what do they talk about? Mainly how they got started making films, their influences, who gave them their big break (in most cases it was either Corman or Band), getting screwed out of money, on-screen violence and what to do if you're an aspiring filmmaker.
.
Scream Queen Brinke Stevens produced and appears as the on-screen hostess. She's seen only at the very beginning standing near the Hollywood sign and does a brief voice-over introducing the interview subjects.
.
Originally released on VHS by Cinema Home Video, the entire Shock Cinema series (four parts in all) is now being distributed by Tempe Entertainment on DVD in a two disc set. This first part is also contained as a bonus on the documentary SOMETHING TO SCREAM ABOUT.
★★
Posted by The Bloody Pit of Horror at 10:20 PM No comments: